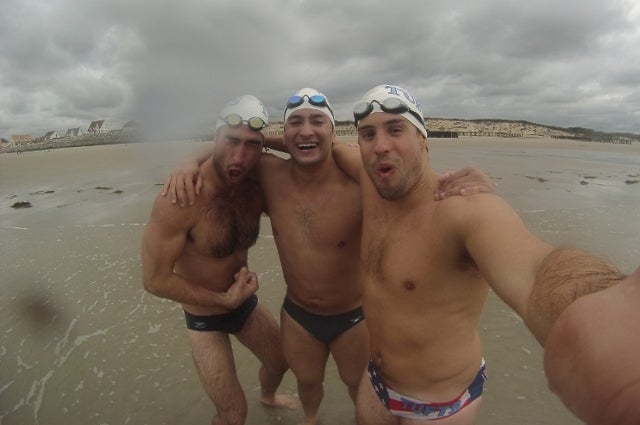 When Andrew Altman, A11, decided that he wanted to swim the English Channel as part of a relay, it didn’t take him long to find some willing accomplices. He reached out to former Jumbo swimming teammates Lou Tamposi and Chris Vorlicek. They were up for the challenge.

The Jumbo trio didn’t just do it, they finished in record time. On Sept. 7, Altman, Tamposi and Vorlicek completed the 26-mile distance in 9 hours, 50 minutes. No three-man relay has ever finished it faster.

“We just wanted to finish it,” Altman said. “We had no idea what the record was. We just did it to do it.”

All three were valuable members of head coach Adam Hoyt’s swimming teams at Tufts, competing in the New England Small College Athletic Conference (NESCAC). Vorlicek, A11, was a two-time All-NESCAC performer in the 400 meter individual medley. Altman was part of the All-Conference 400 freestyle relay team in 2009. Tamposi, A12, scored for Tufts in the 200 and 400 individual medleys, the 1,000 freestyle and the 1,650 freestyle at the NESCAC meet during his career as a Jumbo.

Altman recalls contacting his buddies on July 14, 2014. The process of organizing the swim would take more than a year. Because of water temperatures and tides, English Channel swims can only take place during July, August or early September. The trio also had to charter a boat to facilitate the trip.

They trained as hard as they had at Hamilton Pool when they were members of the Tufts team. Crossing the English Channel, though, is much more challenging than any pool. In addition to coping with ocean swells, the swimmers had to prepare for water temperatures hovering around 60 degrees.

“Leading up to it, I was acclimating my body,” Tamposi says. “I was only taking cold showers.”

To start the adventure, they had booked a week in England, and were on call until the boat captain determined that water conditions were safe enough. At 4 a.m. on Sept. 7, off a beach somewhere between Folkestone and Dover, Altman began the journey for the Jumbo Jets, as the trio called themselves, across the English Channel.

“Andrew started with glow sticks attached to his cap and suit, so all you could see in the water were blinking green lights,” Tamposi says. “It was kind of surreal.” 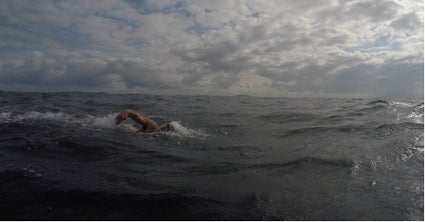 Chris Vorlicek in the open waters of the English Channel.
Tides and currents prevent swimmers from going straight across the Channel, so the swim is done in an S shape. Channel Swimming Association rules for relays require that the swimmers rotate in one-hour sessions. Each new swimmer entered the water behind the boat and caught up to relieve whoever was in the water.

The conditions were relatively smooth as they started, but worsened as the day went on. Swells reached 4 to 6 feet, and the water was frigid. Placing mind over matter was critical.

“I tried to think as little as possible, just zone out,” Vorlicek says. “I counted my strokes, counted my breathing pattern. I had done a lot of open-water ocean swims growing up in San Diego, but never any as tough as this.”

Being on the boat was no picnic either. After some brief sunshine, the day itself was dank. The rough water rocked the vessel 30 degrees back and forth. Beyond being exhausted and wanting to get warm and dry, the swimmers had to keep their balance on board so they did not end up back in the water.

The success rate for swimming the Channel is 20 percent. In fact, more people have climbed to the summit of Mount Everest than have successfully swum across the English Channel. On the day of the Tufts swimmers’ excursion, six attempts were made to cross the Channel. They were one of just two successes.

Watch as Andrew Altman heads toward the French coast.

Mental toughness, with a touch of a guilty conscience, was the key. “None of us wanted to be the one who let everyone else down by copping out in the middle of the swim,” Tamposi says.

Each Jumbo swam three one-hour rotations, and Altman was nearing the end of his fourth shift when he came ashore on a beach in Cap Gris Nez, France, at around 2 p.m. Tamposi and Vorlicek were able to swim ashore as well to celebrate with Altman.

In the month since the swim, their time has been ratified by the Channel Swimming Association as the three-man relay record.

The swim wasn’t just for the record books. With donations made to Swim Across America: Making Waves to Fight Cancer a part of the event, the group also raised nearly $5,000 for cancer research. (Anyone wishing to support the cause can do so here.)

The accomplishment was a celebration of their Jumbo pride, too. “This was a Tufts push through and through ever since inception,” Altman says. “If we hadn’t all gone to Tufts, I don’t think this would have ever happened.  There have been so many great things that have come out of Tufts swimming. We wanted to do something to perpetuate that legacy.”

The Jumbos soon returned to the U.S., where Vorlicek works as a project engineer for Innovative Engineering Solutions in Walpole, Massachusetts, Tamposi is a commercial real estate broker at Avison Young in Boston and Altman is a program manager for Google in San Francisco.

What is their next challenge? They can’t say for sure, except for one thing. “If our record gets broken, we’re going to have to go back,” Vorlieck says.

Paul Sweeney, the sports information director at Tufts, can be reached at paul.sweeney@tufts.edu.