Behind the Silver Screen

Malcolm Turvey, director of the new Film and Media Studies Program, says cinema is alive and well, and studying it can yield valuable new perspectives 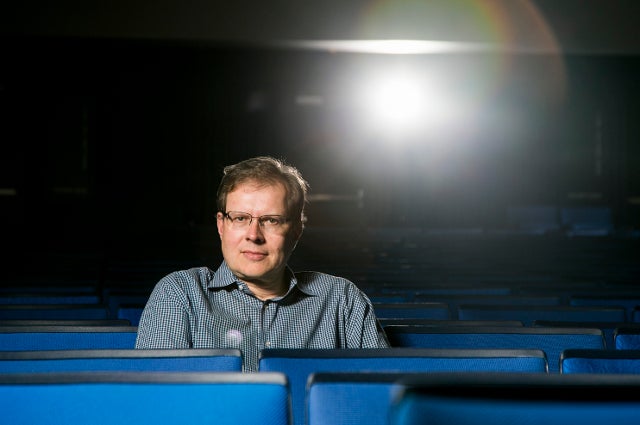 Malcolm Turvey has long been fascinated with film. He watched movies avidly as a child, and studied film at the University of Kent, in his native England, and then at New York University, where he received a Ph.D. in cinema studies. In the fall he arrived at Tufts to direct the new interdisciplinary Film and Media Studies Program; this is the first year that film and media studies has been offered as a major in the School of Arts and Sciences. Turvey is teaching courses this year on the art of the moving image and the global history of cinema.

Turvey, who is also a professor in the Department of Art and Art History in the School of Arts and Sciences, comes to Tufts from Sarah Lawrence College. He has written two books: Doubting Vision: Film and the Revelationist Tradition (Oxford University Press, 2008) and The Filming of Modern Life: European Avant-Garde Film of the 1920s (MIT Press, 2011). He is currently finishing a book on French filmmaker Jacques Tati, and is an editor of the contemporary arts journal October.

He is the first to hold the Sol Gittleman Professorship, made possible through the Gittleman Endowment for Excellence in Teaching. The endowed fund was established in 2003 to honor Sol Gittleman, the Alice and Nathan Gantcher University Professor, longtime provost and German and Judaic studies professor. He talked with Tufts Now about what drew him to film and his hopes for the new program at Tufts.

Tufts Now: What drew you to study film?

Malcolm Turvey: My parents took me to see a lot of unusual and interesting films when I was growing up, and it became clear to me at a young age that film would be an ideal subject to study at university. Luckily, in the late 1980s in the U.K., a few universities were starting to offer degrees in film studies.

At that time, you could also get a wonderful film education simply watching films on British television, particularly BBC2 and Channel 4, which remains a vigorous promoter of film culture in the U.K. Not only did it fund new films, but it also broadcast unusual avant-garde and art films, as well as all sorts of international and older films, which would never be shown on TV here in the U.S. Until I was old enough to go to repertory theaters, I consumed a huge number of films through television.

Were any films particularly influential?

It’s the visual art of film that I find most fascinating. Story and character are important, but they are not the primary interest for me. I’m drawn to filmmakers who do something innovative on the visual or aural level. There are so many I could mention—one director that my parents introduced me to is Jacques Tati.

What’s distinctive about Tati is that, unlike most filmmakers, he hides the most important information. You have to be a very active viewer while watching his films. Most filmmakers put the important information in the middle of the frame, but Tati puts it on the edge. The comic “gag” (his films are by and large comedies) will be off to the side or partly obscured, or there will be other things going on that compete for your attention. He stages things simultaneously. And that means every time you see one of his films, you notice things you haven’t seen before.

In general I am attracted to visionary filmmakers who push the medium in new and exciting directions. I wrote my Ph.D. on a number of filmmakers and film theorists in the 1920s who thought that you could reveal things on film that the eye could not see alone. They believed that due to the size of the screen, and techniques like slow motion, you could reveal the inner state of human beings, which is invisible to the naked eye. This idea led to all sorts of experiments with camera movement, lighting, editing, and other techniques.

Who were some of those filmmakers from the 1920s?

One important experimenter from that period was Dziga Vertov, who worked in the Soviet Union after the Revolution. He believed that film editing could link people together all over the world, enabling viewers to see people they would never meet in person, thereby expanding their consciousness. Another famous innovator was French filmmaker Jean Epstein. He felt that film doesn’t just copy reality, but that it penetrates reality like a microscope, revealing things we could not see otherwise.

Are there contemporary filmmakers you admire?

There is so much interesting film being made. In the States, there are still some strong filmmakers, despite all the naysaying. Todd Haynes has a new film called Carol, which did very well at Cannes; many of us are excited to see this film. I think most cinephiles, though, feel that the really great filmmaking is not happening here or in Western Europe. It’s Asia, I think, that has been the epicenter of innovation over the past 20 to 30 years. I recommend Taiwanese director Hou Hsiao-Hsien. I’m greatly looking forward to seeing his new film, The Assassin.

Meanwhile, my favorite film of 2014 was probably Touch of Sin by the great Chinese director Zhangke Jia. I also loved Johnnie To’s Drug War—he’s a Hong Kong director. And there are many others I could mention. You hear all this talk about the “death of cinema.” But it’s usually by people who only watch Hollywood films or the occasional American “indie” and don’t bother to go and see films from around the world.

You’ve said that the goal of the Film and Media Studies Program is to help students be “media literate.” Could you expand on what that means?

Media literacy is often defined as the ability to access, analyze, evaluate and create media in a variety of forms. This has always seemed a somewhat broad and vacuous definition to me. When I define media literacy, at least in the context of mass visual media such as film, TV and other kinds of moving image art such as video-games, I always draw on Paul Messaris’s notion of “visual literacy.” Messaris is a professor at UPenn, and he wrote a very important book I highly recommend, called Visual Literacy: Image, Mind, and Reality. One of his core ideas is that in order to become aware of how a medium like film or TV or advertising affects you and not just be a passive recipient of it, you have to be able to notice and understand the aesthetic techniques being employed by the medium.

Messaris’ research shows, for example, that if viewers are trained to perceive the editing in a TV commercial, they can understand how that commercial is trying to persuade them to buy a product. Noticing and appreciating the aesthetic dimension of a moving image also has a number of other payoffs. For example, it enables you to appreciate and enjoy the artistry and the creative brilliance behind the work.

It’s like studying music. When you do that, you learn about things like counterpoint, harmony and chord structures. If you don’t know about those things, you can’t really hear what’s going on in the work. But once you do know those things, once you’ve done some music history and some music theory, you can understand why, say, a Mozart symphony is a brilliant work.

The same is true of a film. You really cannot appreciate it as an artwork or understand its effect on you until you are able to notice the formal and stylistic patterns in the work.

What are your goals for the Film and Media Studies Program?

I should emphasize that we’re not a pre-professional program. We believe in the liberal arts, which means that the most valuable thing we can teach our students are capacities like critical thinking, the ability to read thoughtfully, to analyze something in depth, to do independent research and to think creatively.

This is what a liberal arts education really gives to students, and it’s vastly more valuable than job-specific skills, which become obsolete very quickly. For example, you could have a course that teaches students how to use the latest [film] editing software. The problem is that software becomes outdated so quickly that by the time students leave college and enter the industry, a new piece of software will be in use. It’s much better to teach students about the history and theory of editing, and the wide variety of creative ways in which it has been employed by filmmakers and other moving image artists, rather than how to use a specific editing program, which can always be taught in a workshop.

Thus, while we hope our courses do prepare students to enter the film and media fields, we would also like to think that our students could go into law, or into pretty much anything. The capacities they cultivate in our program would transfer to whatever they do in their professional lives. So the program will ideally be a way for students to hone those vital capacities while studying film and media.