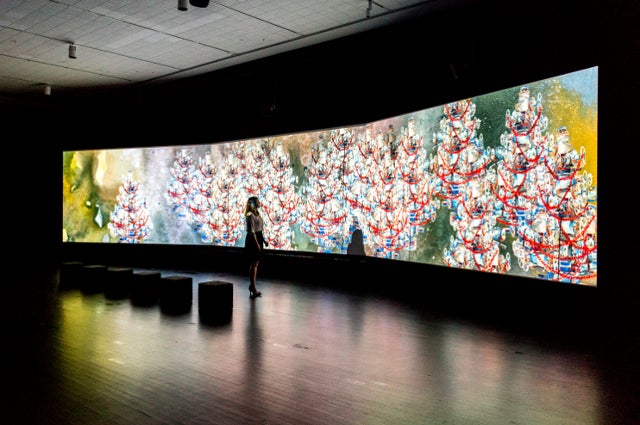 A familiar image greets viewers entering Shahzia Sikander’s solo show at the Tufts University Art Gallery. On the far wall, the southern boundary of the United States emerges near the bottom edge of a large, abstract ink-and-goauche-on-paper painting.

As one draws closer to this painting, Walled States, the shapes of Texas, Florida and Alabama sharpen while their neighboring states dissolve into the contours of what appears to be a mountainous relief map, which further deconstructs into something akin to a Cubist work, before flaring up into a confetti-like conflagration that billows like smoke and fades off in the sky. 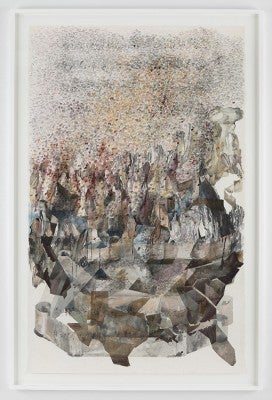 “Walled States,” by Shahzia Sikander. Photo: Courtesy of the artist
Walled States asks its viewers to consider the concept of boundaries. Does the title refer to immigration conflicts between America and its southern neighbors—literal walls along the border? Or, given the artist’s Pakistani background, might it refer to the cultural and political barriers between East and West, in which case the flame-like portions of the painting would be a nod to news footage of militants burning stars and stripes?

Walled States is one of about a dozen drawings, paintings and photographs neatly arranged in the first of two spaces in this show of work by the internationally acclaimed Pakistan-born artist, who now lives and works in New York City. The exhibition, Shahzia Shikander: Parallax, runs through Dec. 6 at the Tufts University Art Gallery.

A 1991 graduate of the National College of Arts in Lahore, Pakistan, the city where she grew up, Sikander has made a significant impact on the international art scene. Her early student work challenged the strict conventions of Indo-Persian miniature painting. In her undergraduate thesis, The Scroll, she experimented with scale, creating multiple visual narratives on a hand-prepared scroll of paper that measured 13 inches by 5 feet—a monumental size for the genre. What’s more, these multiple narratives featured a female protagonist, which was revolutionary.

“Her thesis exhibition sparked so much dialogue, even controversy, that five reviews or articles were published about her” after she first showed it, says Amy Ingrid Schlegel, director of  galleries and collections at Tufts. “Sikander’s innovations beginning in the late 1980s while still a student in Lahore helped launch a major resurgence of the miniature painting genre.”

In 1995, Sikander earned her M.F.A. from the Rhode Island School of Design, where she started to experiment with video, animation, performance, large-scale installations and collaboration with other artists, including musicians. For her emerging body of work, she received a 2006 “genius award” from the John D. and Catherine T. MacArthur Foundation and a 2013 U.S. Department of State Medal of Arts from Secretary of State Hillary Clinton.

Her art has been shown in hundreds of group and solo shows in major museums from New York City to Tokyo, and has appeared in many non-traditional sites, too. For instance, her Gopi-Contagion digital animation ran on massive electronic billboards surrounding Times Square through the month of October.

In 2011, the Sharjah Art Foundation in the United Arab Emirates (UAE) invited Sikander to create a work of art for the 11th Sharjah Biennale in 2013. The artist seized the opportunity. In the 1980s, as a young woman, she had visited the UAE and been struck by evidence of the changes that had taken place after the British had withdrawn their colonial protectorate from the region in 1971. At that time, the UAE and its neighbors, Bahrain, Qatar and Oman, had been formed.

From 2011 to 2012, Sikander returned to the UAE and immersed herself in the culture. She rented a car and drove from the city of Sharjah out into the abandoned outposts and oilfields of the desert.

She spoke with everyone who would talk with her, listening to each person’s stories, taking them in and eventually translating them into art. The piece that resulted, Parallax, premiered at the Sharjah Biennale and is now on view for the first time at an art museum in the United States. It’s the work that occupies the second room of the exhibition at the Tufts Art Gallery. 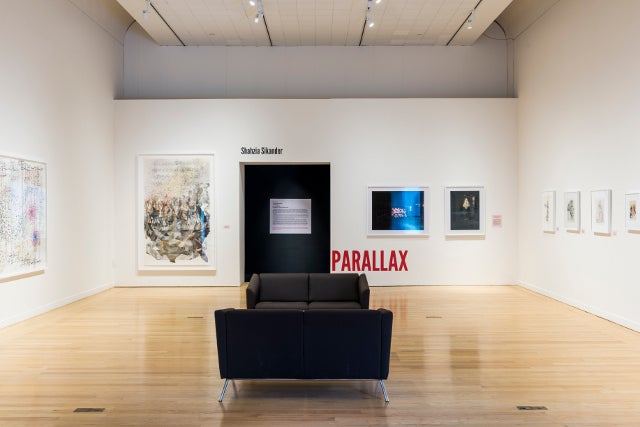 The opening room of the exhibition “Shahzia Sikander: Parallax.” Photo: Courtesy of Tony Luong
The show, says Schlegel, came about thanks to an invitation from Ayesha Jalal, the Mary Richardson Professor of History at Tufts. “Tufts Art Gallery has a very special place that’s firmly integrated into the school,” says Jalal, like Sikander a native of Lahore. “We are moving in a direction where we can use the art gallery more in our courses.”

“We’ve had interest from all different departments,” adds Elizabeth Canter, the Gallery’s educator and academic programs coordinator. During the first month of the show, Canter has already used the exhibition to co-teach courses in sound studies, civil engineering, American studies, sociology and music composition.

A second-year civil and environmental studies graduate student, Aishwarya Venkat, has worked with Sikander to create a Parallax map gallery companion website focusing on the UAE. The site can be accessed on an iPad at the show.

A View of the World

Parallax is a kaleidoscopic, 15-minute animation digitally projected across an immense three-panel screen. Its soundtrack, by the Chinese composer Du Yun, consists of contemporary music and sound recorded in the UAE, along with Arabic poetry recited by three poets living in Sharjah.

Sikander created her visual tapestry by digitally layering and combining hundreds of her ink, goauche and watercolor paintings. Like her Scroll, it contains multiple narratives. They build with the soundtrack to a crescendo and are followed by some sense of resolution, though the meaning of them is left open for the viewer to contemplate. The work itself seems like a parallax, offering multiple ways of seeing the same thing.

Back in the first room of the exhibition, some of the drawings and paintings can be recognized as stills from the animation. There are also photographs that document how the work progressed to its finished state. Other pieces in that first room, like Walled States, complement themes the artist explores in Parallax. Both Walled States and Parallax look at the impermanence of man-made boundaries and the many cultural and political differences between East and West. They delve into immigration issues as well, which is appropriate, since non-citizen workers from South Asia make up 85 percent of the UAE’s population, as noted on the Parallax map gallery website.

Ultimately, all of the works in the show remind viewers that there are many ways to look at the same thing. Sikander seems to be saying that as we face seemingly endless cultural and political conflicts between nations and neighbors alike, such a message is well worth remembering.

Shahzia Sikander: Parallax is on display through Dec. 6. Gallery hours are Tuesday through Sunday, 11 a.m. to 5 p.m. and Thursday until 8 p.m. For more information, visit http://artgallery.tufts.edu or call 617-627-3518.