Tufts researchers have pioneered a new way to study the properties of cells at unprecedented resolutions and speed, allowing them to examine more precisely, for example, the differences between cancer cells and healthy ones. The technique could lead to faster and more accurate diagnostic tests for a range of diseases or even offer insight into how we grow old.

Using a combination of existing spectroscopy technologies, Igor Sokolov, a professor of mechanical and biomedical engineering, and postdoctoral researcher Maxim Dokukin generated mechanical data from tissues and other kinds of “soft” biological materials at resolutions as much as 100 times better than current methods. The research was published this summer in Scientific Reports, an open-access journal put out by the group that produces the journal Nature. The work was funded mostly by the National Science Foundation. 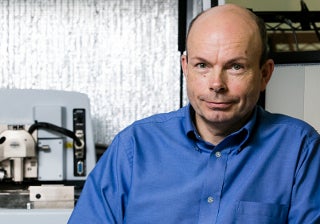 The novel approach gives researchers information about the mechanics of soft materials, such as the proteins that make up our skin and hair and long chains of molecules known as polymers, says Igor Sokolov. Photo: Kelvin Ma
Sokolov likens the advancement of the new technique to the difference between the optical microscope, invented in the 16th century, and the scanning electron microscope, developed in 1931. With an optical scope, you can see objects roughly the size of a large virus, about 200 to 300 nanometers. (A nanometer is just a tiny fraction of the width of a single human hair.) Scanning electron microscopes, by contrast, can image objects as small as 1 to 20 nanometers, about the size of the large molecules in DNA. But they aren’t useful with organic materials, Sokolov says.

The device Sokolov’s team has invented—which they call FT-nanoDMA, because it employs Fourier transform spectroscopy (FT) and dynamic mechanical spectroscopy (DMA) down to the nanoscale (nano)—can accurately gather information about soft materials down to 10-50 nanometers.

And it can do that quickly, taking less than one second per surface point to relay back properties of a 100-by-100-pixel area in just a few hours’ time. That’s compared with the 23 days the competing existing technologies require. The new technique can also do something that others cannot—study dynamic mechanical properties of individual cells. It’s at this scale “where new things typically happen,” says Sokolov.

The novel approach gives researchers information about the mechanics of soft materials, such as the proteins that make up our skin and hair and long chains of molecules known as polymers, which either occur naturally or are engineered. The new method measures a characteristic known as viscoelasticity—a material’s ability to stretch under pressure and bounce back at a definite speed—think Silly Putty versus a rubber band.

The resulting data could be used to assess the properties of malignant cells and healthy ones, with the potential for developing fast, accurate diagnostic tests, Sokolov says. Better insight to the mechanical properties of other kinds of cells could also shed light on vascular and kidney diseases, Alzheimer’s, cataracts and even the aging process, to name a few, he says.

A Holy Grail of Nanomechanics

Consider how skin cells change as we age. “They get dramatically stiffer,” Sokolov says. “Can we see detailed differences in the biomechanical characteristics of the cells? Can we fix old-cell stiffness to return it back to the young level?”

Researchers typically measure viscoelasticity by testing materials at various frequencies, or rates of vibrations. Scientists scan through these frequencies one at a time, like clicking through TV channels with a remote, and examine mechanical properties at each “station.” The breakthrough by Sokolov’s team came when they figured out a way to use the whole spectrum of frequencies. They decided, “Why not try them all at once?”

That had not been done before, Sokolov says, because “you would get cross-talk,” or interference among the frequencies. “It took seven years to understand how we could do it, but we now have a device that does it accurately.”

While the new method is cutting-edge—Sokolov calls it “a Holy Grail of nanomechanics”—it lacks one feature normally associated with high-tech innovations: a hefty price tag. That’s because the group of technologies their device employs, including atomic force microscopy (AFM), have been around for 20 years or more. Using them together requires little more than some additional computer software to sync the various technologies. “It can easily be implemented in existing AFMs for a moderate cost and should provide immediate impact,” Sokolov says.

Atomic force microscopy was one, if not the, major tool responsible for the emergence of nanotechnology, notes Sokolov, who has been using AFM for more than two decades. By developing this new imaging technique, he and his colleagues have expanded AFM’s reach, allowing it to quantify new characteristics of materials at a previously inaccessible scale.

“And it will accomplish this more than 100 times faster,” Sokolov adds. “This will open a new dimension in characterization of mechanical properties of soft materials.”