Since 1998 a large team from the Eliot-Pearson Department of Child Study and Human Development has been helping to chart the course for Healthy Families Massachusetts, an agency that serves first-time young mothers. HFM, as the program is known, tries to reduce child abuse and neglect by supporting positive, effective parenting skills and promoting a nurturing home environment.

According to evaluators on the Tufts team, the agency is doing its job. It significantly lowers parents’ risky behaviors, such as drinking or drug use, which likely reduces children’s exposure to traumatic events; it lowers parenting stress, a risk factor for child abuse and neglect; and it significantly increases educational achievement, paving the way for self-sufficiency.

The Tufts evaluators began looking at the program only a year after it began in 1997. Suzin Bartley, H15, executive director of the Children’s Trust, which oversees HFM, says the relationship between her organization and Tufts has become a partnership. “I don’t use that word lightly,” she says. “They have been with us every step of the way.”

Many of the young mothers who receive home visits from HFM workers face challenges even before they become pregnant. Some have grown up in chaotic households, moving from place to place. Some have been physically or sexually abused as children.

Compounding these challenges, says Jayanthi Mistry, an associate professor at Eliot-Pearson and one of four principal investigators for the Tufts project, is the fact that these young mothers are making a transition to adulthood and to parenthood at the same time. Either change can be stressful; undergoing both simultaneously compounds the difficulties.

Reducing those pressures, says Becky Fauth, the project manager at the Eliot-Pearson program, lowers the likelihood for mistreatment. “A lot of research shows that teen moms can be at risk for stress, and then for potentially abusing children,” she says. “Home visitors help young mothers continue their education, teach them how to care for their children and counsel them to prevent repeat pregnancies.” 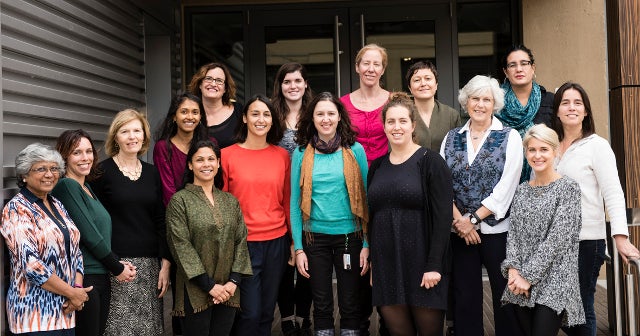 Members of the Tufts Interdisciplinary Evaluation Research team in front of the Collaborative Learning and Innovation Complex on Boston Avenue. Photo: Alonso Nichols
While Tufts has certainly given HFM useful help and direction, the university community has benefited, too. The ongoing evaluation has grown into a full-fledged research center, called Tufts Interdisciplinary Evaluation Research, which has provided a rich opportunity for dozens of students from departments throughout the university every year since the project started.

Each semester at least 40 students are involved in follow-up interviews with young mothers or are working with the wealth of data that serves as the foundation for numerous papers, theses and dissertations.

“We have sent a lot of students on to graduate programs at higher levels,” says Ann Easterbrooks, a professor at Eliot-Pearson and a principal investigator on the project. “We’re proud of the way we’ve been a part of their education.”

The research center, says Mistry, represents the best of undergraduate and graduate education at Tufts, with the more-experienced faculty and students working closely with those with less experience.

Easterbrooks, along with Mistry and the other two principal investigators—Francine Jacobs, an associate professor both at Eliot-Pearson and in the Department of Urban and Environmental  Policy and Planning, and Jessica Goldberg, a research associate professor at Eliot-Pearson—oversees a professional team of postdoctoral students who then supervise master’s degree students and undergraduates, fostering close, mentored relationships.

The Tufts evaluators have helped HFM make some key changes in the way it provides services. Early on in the project, for instance, the Tufts team recognized a simple but critical problem. Plenty of home visits were being cancelled, but the Children’s Trust didn’t know about it. Tufts researchers quickly recognized that visits were being scheduled on a 9-to-5 basis, but the young mothers’ lives didn’t work that way: some were in school, others at work. Because of Tufts, visits are now scheduled more flexibly.

More recently, Tufts researchers found that nearly half the young mothers were struggling with significant depression. “This isn’t postpartum depression, and we know that home visits are not going to be the silver bullet that alleviates that problem,” says Bartley. “But we know that a depressed mom is not going to be as available emotionally for her child, and that’s not a good thing, so we began to work on that.” The result was the initiation of a program called Moving Beyond Depression, a cognitive-behavioral health intervention that so far has had promising results.

Tufts researchers have created what Bartley calls the most robust database about teenage parents in the country, thanks to its work with HFM as well as the university's access to information from many state agencies. That has led to important insights about young mothers. For example, one finding is that 55 percent of the young mothers in the HFM program have suffered from child abuse and neglect themselves. “So this is about breaking the cycle,” Bartley says.

Mistry and other Tufts researchers say that seeing their work affect programs for young mothers and their children has been rewarding. As for HFM, Bartley says it’s rare for an agency to be able to assess how it is doing and make useful changes on a regular basis.

“We have learned that we are lowering parental stress, which increases the chances that the children will do better,” she says. “We have to be giving support and education for what is the most important role in the world.”