Eat, Sleep and Be Healthy

The research is pretty clear that people who regularly get enough sleep have healthier body weights than people who skimp on shut-eye. Hassan Dashti, N12, N15, may have found a connection between sleeping and the food choices people make that helps explain it.

For a study published in the American Journal of Clinical Nutrition, he looked at nearly 15,000 people from several countries and compared how much sleep they usually get each night with the fat, protein and carbohydrates in their diets. 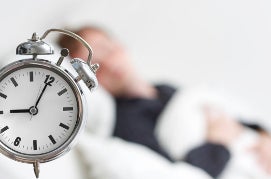 “The connection between sleep and weight may be partly due to food choices,” says Hassan Dashti. Photo: Ingimages

“Our results suggest that the connection between sleep and weight may be partly due to food choices,” Dashti says. “The results consistently suggest that better-rested adults tend to have healthier intakes, particularly related to fat intake, than those sleeping fewer hours.”

Working in the Nutrition and Genomics Laboratory at the Jean Mayer USDA Human Nutrition Research Center on Aging at Tufts, Dashti also looked at mutations in a gene called CLOCK (Circadian Locomotor Output Cycles Kaput), which affects circadian rhythms, helps control appetite and has been associated with body weight.

While the results weren’t statistically significant, he did find some evidence suggesting that for people with a certain CLOCK mutation, getting regular sleep could ameliorate a genetic predisposition to obesity.

“Achieving sufficient sleep may improve their diets, and by doing so, potentially reduce their risk of becoming obese,” Dashti says.

How Does Acetaminophen Work?