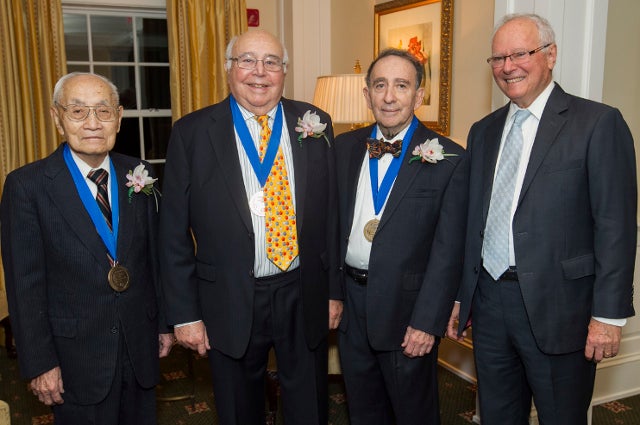 A recent festive gathering at the Wellesley Country Club of approximately 200 Tufts School of Medicine students, faculty and graduates from the Boston area saw three medical faculty members—two current and one retired—celebrated as groundbreakers and leaders in their respective careers. Harris Berman, dean of the medical school, presented them with Dean’s Medals, given periodically to mark distinguished achievements in the field of medicine.

In his prefatory remarks, Berman was quick to observe that the evening’s award recipients were “people who made a significant difference not just at Tufts, but in the world.” The honorees were Stuart Levy, Sherwood Gorbach, M62, J84P, and Te-Wen Chang, M84P, each of whom have forged careers by advancing the medical understanding of infectious disease.

Levy, who joined the Tufts faculty in 1971, is a leading health policy advocate and researcher in the area of antimicrobial drug resistance. His groundbreaking work focuses on the mechanism and control of resistance in both bacterial and mammalian cells. He is currently Distinguished Professor of Molecular Biology and Microbiology, Medicine and Public Health and Community Medicine. Over his career, he has published more than 250 papers and edited or published 11 books, including his widely cited 1992 book, The Antibiotic Paradox.

In 1981, Levy co-founded the Alliance for the Prudent Use of Antibiotics, an international nonprofit with chapters in 65 countries. He continues to serve as president of the organization. “I’ve been on his board for 18 years,” noted Berman, himself an infectious disease specialist, to appreciative laughter from his audience.

A revered educator, researcher and mentor, Sherwood Gorbach joined the medical faculty in 1965, and went on to direct the Division of Infectious Diseases at Tufts Medical Center and the Division of Nutrition and Infection in the Department of Public Health and Community Medicine. He has been continuously funded since 1969 by the NIH for his research in infectious disease and nutrition.

One of his most notable findings is that enterotoxigenic E. coli is a major cause of life-threatening diarrheal illness in both adults and children, especially in the developing world. Editor of Clinical Infectious Diseases for the past 16 years, Gorbach has published more than 500 articles, and his body of research was commended with the Alexander Fleming Award for Lifetime Achievement from the Infectious Diseases Society of America in 2007.

Gorbach’s influence extends far beyond the laboratory, however. He has received the Citation for Excellence in Teaching 12 times and twice been honored with the Special Faculty Recognition Award, given by the graduating medical class. Over the years, he has influenced the careers of many leading figures in the infectious diseases field. Although he was appointed emeritus professor in 2014, he continues to teach, mentor, publish, edit, consult and otherwise contribute daily to the field he helped define.

Te-Wen Chang, the evening’s third honoree, was brought to Tufts in 1957 by Louis Weinstein, another infectious diseases pioneer on the Tufts faculty, to work in Weinstein’s lab. Chang had earned his medical degree from the National Central University Medical College in Nanking, China, and had subsequently received graduate training in virology in this country.

In 1978, working in a Tufts lab under the direction of Gorbach, he made the seminal discovery that toxin-producing clostridia are the cause of antibiotic-associated pseudo-membranous colitis. This research, published in the New England Journal of Medicine, proved to be a landmark finding in the understanding of C. difficile, a major enteric pathogen that even today is responsible for some 29,000 deaths annually in the U.S. Throughout his career, Chang authored more than 200 studies on C. difficile and related infectious diseases.

Chang brought much more than scientific acumen to his work. Berman quoted a research partner of Chang’s who said of Chang: “He was a brilliant scientist, but quiet about it. He was also lots of fun to have in the lab.” As one who used to occupy an office directly across the hall from the honoree, Berman said he could vouch for this characterization based on his own experience. Chang, now 95 years old, was named associate professor emeritus of public health and community medicine in 1993.

The evening concluded with a mini-concert at the front of the room that featured Lynn Chang, son of the medal recipient and an internationally acclaimed violinist who is on faculty at the New England Conservatory. He was joined by his wife, Lisa Wong, violin; the honoree’s granddaughter Jennifer Chang, viola; grandson Christopher Chang, viola; and grandson-in-law Solon Gordon, keyboards. They offered two light, graceful musical numbers—Salut d’Amour by Elgar (“which needs no explanation,” the son commented) and “The Impossible Dream,” from Man of La Mancha (“for all those times when things are hard in the lab”). The intimate music lent a nice, final touch to the celebratory mood.