The Continuing Fight Against a Lethal Parasite 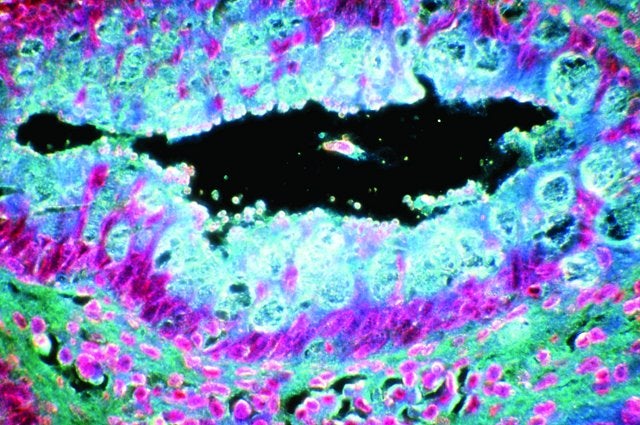 A gastrointestinal parasite that causes serious diarrhea and malnutrition in infants and toddlers could well meet its demise in Saul Tzipori’s laboratory at Tufts University.

The microscopic bug known as Cryptosporidium, or crypto, is transmitted via the stools of infected people or animals, most often in contaminated water. The World Health Organization estimates that 840,000 children under age 5 die from diarrheal disease every year—more than from measles, malaria and AIDS combined.

A 2013 study of diarrheal disease in 22,500 children in sub-Saharan Africa and South Asia identified crypto and three other pathogens as the primary culprits for these intestinal infections. Cryptosporidium is the second most dangerous diarrheal pathogen in the developing world for those under age 2, after rotavirus, according to the study published in the Lancet.

There is a vaccine for rotavirus, but none for crypto. Tzipori, the Agnes Varis Chair and chair of the Department of Infectious Disease and Global Health at Cummings School of Veterinary Medicine, is working with other scientists to develop one using the research lines of the parasite from his lab—the only one in the world that maintains Cryptosporidium hominis, the species that causes the most significant disease in humans.

The 2013 Lancet study “put crypto on the map, unequivocally,” says Myron Levine, associate dean for global health, vaccinology and infectious diseases at the University of Maryland School of Medicine, who was the principal investigator for the study, funded by the Bill & Melinda Gates Foundation. “It became an important pathogen to control—either by developing a vaccine or a good treatment. Unfortunately, we have neither at the moment.”

Before the findings of the Global Enteric Multicenter Study were published, Cryptosporidium was not on the radar of many scientists or funding agencies. In addition to causing life-threatening diarrhea, the study found that crypto resulted in stunted growth and impaired cognitive function in preschoolers, Levine says.

At Tufts University, though, crypto has been on the research agenda for more than two decades. Scientists began studying the pathogen in the early 1990s, when the persistent diarrheal disease proved fatal for HIV/AIDS patients whose immune systems were already weakened. “Eventually, chronic diarrhea would cause people to die of wasting, and patients would also have fatal complications when the infection spread into the liver and lungs,” says Tzipori. Then the advent of antiretroviral drugs wiped out nearly all HIV/AIDS-related cases of opportunistic infections, including cryptosporidiosis, in the United States and in Europe.

Crypto entered the public sphere again in the mid-1990s, when a major waterborne outbreak of cryptosporidiosis killed more than 100 people in Milwaukee and sickened another 400,000. The American Water Works Association and the U.S. Environmental Protection Agency responded with substantial funding to improve technologies for detecting the parasite in public drinking-water supplies and sterilizing the water. Once the threat was eliminated, funding for crypto research ebbed.

The work at Tufts continued, however. In 1998, Tzipori and Jeffrey Griffiths, a professor of public health and community medicine at Tufts School of Medicine, began studying the disease in preschoolers at Mulago Hospital in Uganda’s capital, Kampala. Over the last decade, Tzipori, Griffiths and their colleagues in Uganda have reported that cryptosporidiosis is a significant cause of severe diarrhea in children.

So late last year, when Levine led a team of investigators from the University of Maryland, Tufts University and the University of Virginia in securing substantial funding from the National Institutes of Health (NIH) to develop vaccines to prevent five diarrheal diseases and related illnesses, he tapped Tzipori to be the principal investigator for the project on cryptosporidiosis.

“In my view, Saul knows more about Cryptosporidium than anybody else in the world, and we want to have a crypto vaccine,” Levine says. For the project, funded through the NIH Centers of Excellence for Translational Research, Tzipori is collaborating with researchers from the universities of Maryland and Virginia, as well as with Abhineet Sheoran, an assistant professor at Cummings School whom Levine calls “another very special investigator.”

Tzipori says he’s only too happy to put the strains of crypto he has maintained for 15 years to good use. “Maybe they can bear some fruit now that there’s some funding available from NIH and considerable interest by the Gates Foundation to try to resolve this problem in developing countries,” he says.

In addition to the work on a vaccine, Tufts researchers are investigating whether someone can get sick simply by inhaling the parasite.

While it has been accepted that Cryptosporidium is transmitted primarily through ingestion of contaminated water, a Tufts study published in July 2014 in Clinical Microbiology Reviews (CMR) found that infected individuals may also be coughing and sneezing crypto onto others. The paper’s lead author, Jerlyn Sponseller, V15, a graduate student in infectious disease and global health at Cummings School, is the project coordinator on a five-year, NIH-funded study at Uganda’s Mulago Hospital to determine whether the parasite can, indeed, become airborne and infect others.

“One of the things that used to kill people with HIV/AIDS is crypto’s ability to spread to and damage the lungs, leading to the development of pneumonia,” says Tzipori, a co-author of Sponseller’s CMR study, along with Griffiths.

One theory, Sponseller says, is that the disease may actually invade the lungs first and then migrate, either by coughing and swallowing or via the bloodstream, into the gastrointestinal tract. Respiratory cryptosporidiosis has been documented in multiple species of birds and mammals, she says. Working with the pediatric patients at the Ugandan hospital and their families at home, “we are hoping to show that respiratory cryptosporidiosis occurs commonly in humans, too. If the infection is also being transmitted by the respiratory tract, then we can recommend new control measures,” says Sponseller.

On another front, Giovanni Widmer, a molecular parasitologist at Cummings School, says the composition of naturally occurring microbial populations in the gut may predict how well some children are able to weather a crypto infection. In a study published in March in the International Journal for Parasitology, Widmer and former Cummings School Ph.D. student Refaat Ras discovered differences in the population of gut bacteria in mice infected with Cryptosporidium versus those in healthy mice.

“It may be possible to simply tweak a patient’s microbiome [the collection of more than 10,000 species of bacteria, fungi and viruses that inhabit your body] with probiotics,” Widmer says. “This might not cure the infection, but it could make symptoms less severe and give an infant’s body more time to mount an immune response and get the infection under control.”