Could bacteria help fight colorectal cancer? A collaborative group of Tufts researchers hope to find out 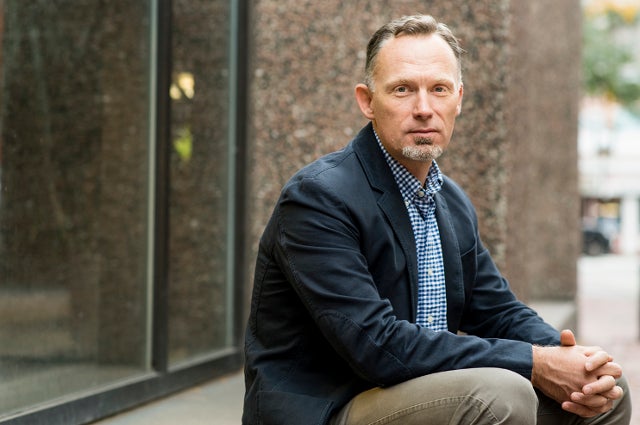 Obesity is a major risk factor for developing colorectal cancer, the second leading cause of cancer deaths in the United States. But someday doctors may be able to lessen the effect of that risk factor.

Jimmy Crott, a scientist in the Vitamins and Carcinogenesis lab at the Jean Mayer USDA Human Nutrition Research Center on Aging at Tufts (HNRCA) and an assistant professor at the Friedman School, is investigating how obesity, diet, genetics and colon cancer are related.

Now, in collaboration with Anne Kane at the School of Medicine and Qiaobing Xu, Kyongbum Lee and Soha Hassoun at the School of Engineering, he is testing new ways to dampen obesity’s impact on colorectal cancer tumor formation. The team’s study is one of three projects to receive funding from Tufts Institute for Innovation (TII) this year, in the second round of TII’s year-long seed grants.

Tufts Now asked Crott to describe the unique collaboration and what the researchers hope to learn.

Tufts Now: How did this project come about?

Jimmy Crott: The whole project stemmed from a collaboration that started three or four years ago at the HNRCA called the Cancer Cluster initiative. We assembled a group of like-minded researchers and decided to work on how the microbiome—the ecosystem of bacteria that inhabit each of our bodies—impacts cancer, because that was something we were all interested in.

We did one experiment where we compared the effects of diet-induced obesity and genetically induced obesity on the gut microbiome and the metabolome—that is, all the chemicals that were present—and we looked at how those effects related to cancer. In obese mice we found a few bacterial species and chemical compounds that were at lower levels than normal. It turned out that the reduction of those same species of bacteria and chemicals was associated with increased tumors. The TII grant is a direct follow-up of that observation.

What exactly will you be looking for?

In the first study, we observed these bacterial species and chemical compounds to be reduced in obese and tumor-bearing mice. So the next step is to see what happens when we add them back.

We are going to add back a species of bacteria called Parabacteroides distasonis (P. dist), the one we found in the first experiment—it is normally found in the gut in mice and in humans. There is some evidence to suggest it is also anti-inflammatory. That’s interesting because inflammation is thought to be the major link between obesity and colorectal cancer.

People who have the intestinal ailments Crohn’s disease and colitis—conditions that involve very severe inflammation of the gastrointestinal tract—have less P. dist in their guts than normal. In fact, the worse their Crohn’s or colitis, the more the bacteria are reduced.

In the lab, when you feed P. dist to mice, you can inhibit chemically induced colitis, so there is some suggestion that it will be protective against tumors in our study.

What is the other factor you’ll be testing?

We are also going to add adenosine, a signaling molecule that is anti-inflammatory. We know from studies of colitis that adenosine seems to be effective in reducing inflammation.

We’ll feed cancer-prone mice high-fat diets and low-fat diets. One group of high-fat-diet mice will get adenosine added to their food, another will get P. dist added, and the third group will get both, to see if we can inhibit obesity-induced tumors in these mice.

Why did you pursue TII funding for this project instead of more traditional grants?

The TII grant is a nice way to get more preliminary data. This is kind of an unconventional approach, too, that probably wouldn’t be appreciated at the National Institutes of Health (NIH). We’re combining the metabolite with the bacterial species; the NIH would probably prefer us to focus on one molecule. NIH is very interested in finding the exact mechanism, so this is nice that we can just define the phenomenon and efficacy and get some hints of the mechanism.