Tufts photographers serve up their favorite images from all three campuses

Throughout the year, university photographers roam the Medford/Somerville, Boston and Grafton campuses to document life at Tufts, from students’ arrival through graduation, focusing on everything from the changing seasons to a visit to the veterinary farm service in Connecticut.

Just for you, the Tufts Now audience, photographers Alonso Nichols, Kelvin Ma and Matthew Healey have picked out a few of their favorites and tell us the stories behind the lens. 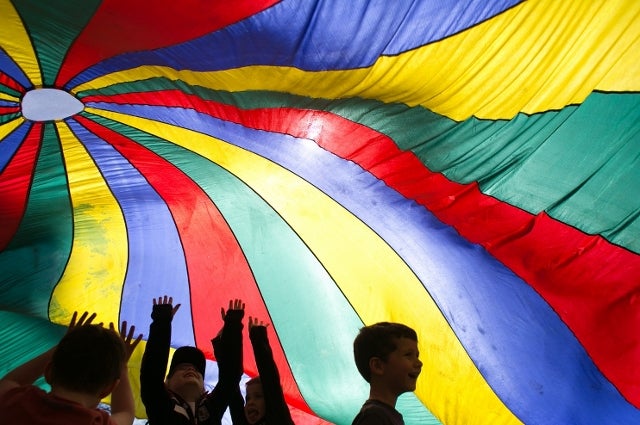 Children from the neighboring communities are welcomed to the Medford/Somerville campus each spring for Kids’ Day, hosted by the Leonard Carmichael Society, Tufts’ largest student-run organization. Photo: Matthew Healey
Children come for a day of play and fun at Tufts every year. This parachute provided just the right amount of color, light and graphic interest to make an unusual and fun frame.

A Light of Peace 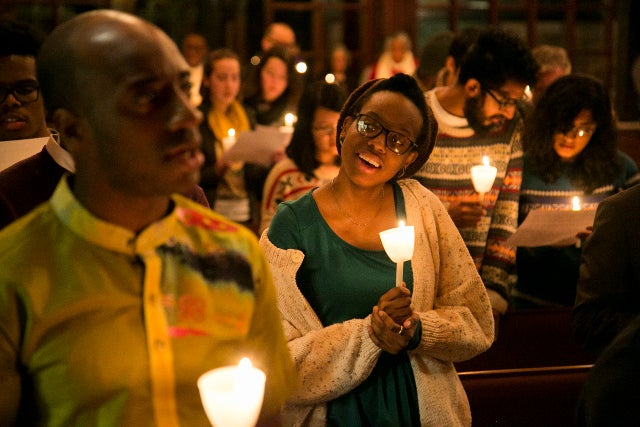 Antonia George, A17, sings at the Martin Luther King Jr. Day Community Celebration at Goddard Chapel on Jan. 22. Photo: Kelvin Ma
At the annual commemoration of Martin Luther King Jr. Day, the Tufts community comes together to remember and celebrate the legacy of one of the world’s great champions for justice and human rights. I think this image connects us to the light that he sparked in all of us. 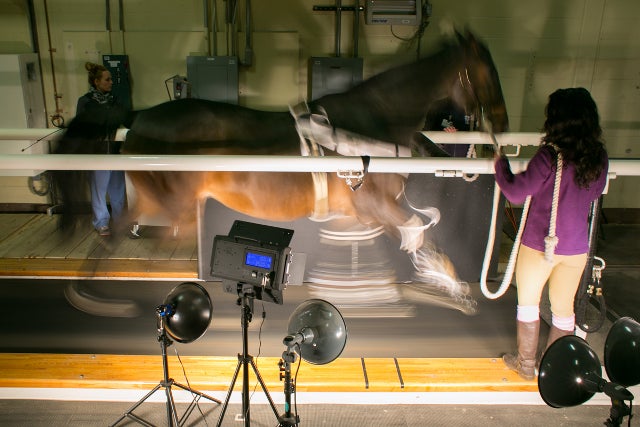 Willow, a Holsteiner mare, has her gait measured while she runs on a treadmill at Cummings School. Photo: Matthew Healey
There’s a treadmill for horses? Yes, indeed, and this horse is wearing a prototype monitoring device to help analyze her gait. There were a number of challenges in making this photo—the room and horse were dark, and the horse was running fast and was also sensitive to the flashing strobes from the camera. I worked within these limitations to make a frame that conveys the motion and activity without interrupting the veterinary diagnosis. 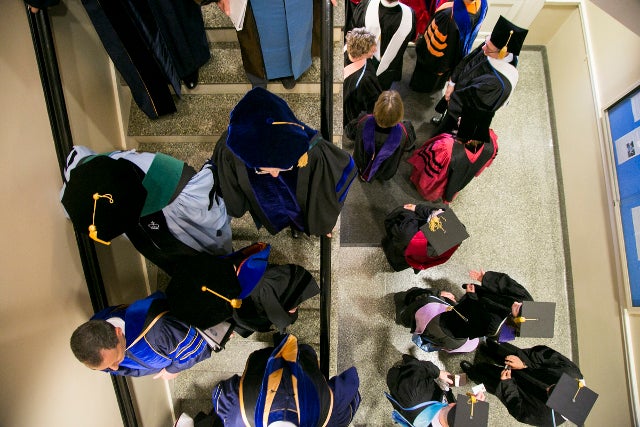 The platform party lines up in the stairwell of Ballou Hall, preparing to enter commencement on May 17. Photo: Kelvin Ma
Capture the pageantry of commencement (check); unusual perspective (check); significant moment of the day (check). Sometimes, the best photos come from the least obvious places. While waiting at the back of the faculty procession in Ballou Hall, I decided to look for a different take on the annual rite of passage and found this.

The Cost of Climate Change 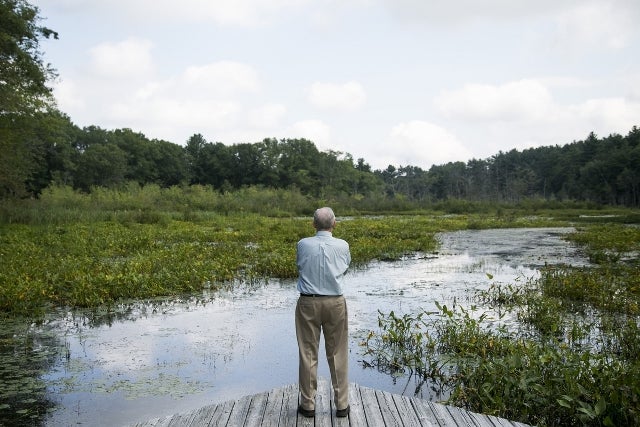 “West Nile virus has spread more, in part because of changing climate conditions, which affect the breeding of mosquitoes,” says Barry Levy. Photo: Kelvin Ma
A majority of our assignments are portraits, many of which involve researchers and labs. I made a different kind of portrait of Barry Levy, A66, an adjunct professor of public health at the Tufts School of Medicine whose research includes assessing the impacts of climate change on human health. From the vantage point I chose, he is surrounded by sky, trees and water. 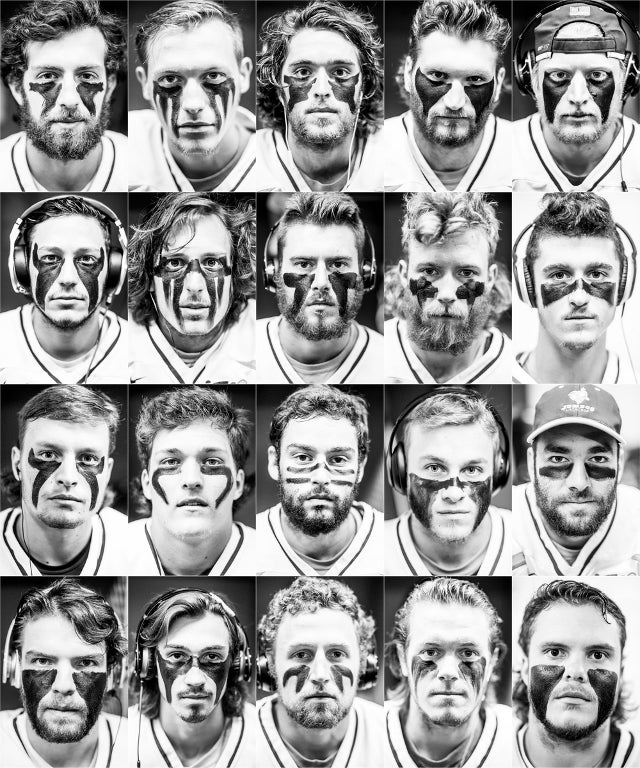 The lacrosse team, painted and primed for battle on the field. Photos: Kelvin Ma
As our national champion lacrosse team was defending its title in Philadelphia on May 24, I decided to show the faces behind the facemasks, shooting photos in the locker room before the players took the field. The tight focus on their faces puts us right there with them. 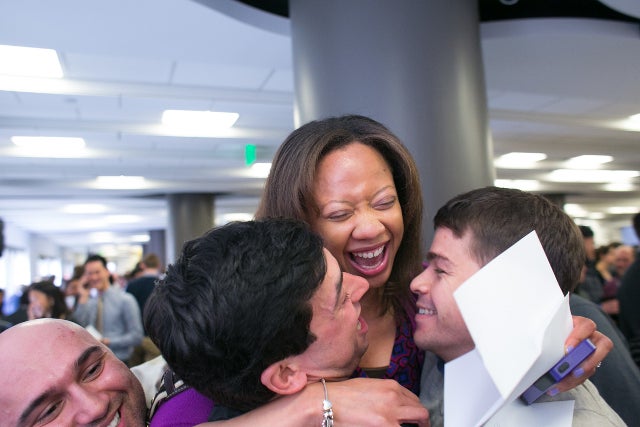 Fourth-year medical students react to news of their matches with hospital residency programs around the country. Photo: Matthew Healey
The nervous energy runs high as medical students all over the country wait to open the envelopes that will tell them where they will spend the next several years of their lives doing residencies, and in what field of medicine they will train. Once they begin opening the envelopes, the action and emotion come and go quickly. I was in the perfect spot to capture this student as she got the news she was hoping for that day.

Eyes on the Prize 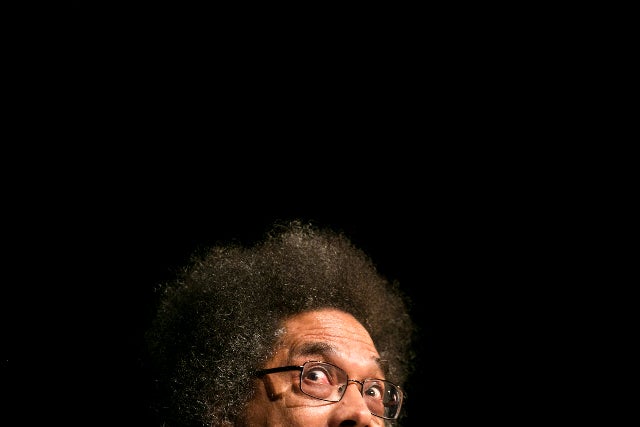 Cornel West speaks at Cohen Auditorium, promoting his latest book, Black Prophetic Fire, on Jan. 21. Photo: Kelvin Ma
Photographing speakers is a staple of university photography assignments. The challenge is to convey a sense of the character, personality and feeling of the speaker. The standard photo is a gesture of the hands and a strong set to the mouth or a smile. Cornel West is an intense and powerful orator, and I tried to portray that by making a tighter frame that forces us to see the emotion in his eyes. I also use the negative space around him to accentuate the unmistakable outline of his hair and face. 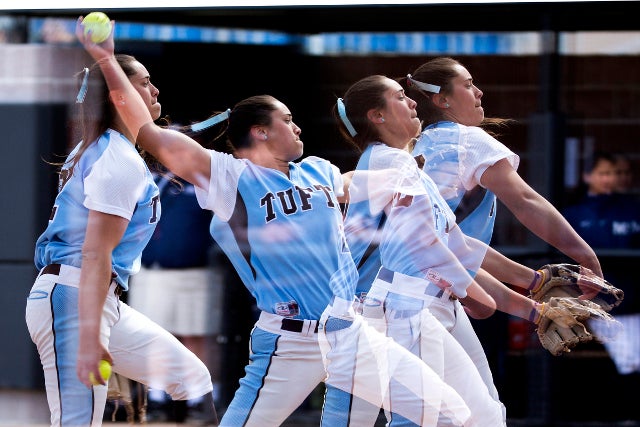 Allyson Fournier, E15, delivers for Tufts in its 2-0 win over Middlebury in a NESCAC championship game at Spicer Field on May 1. Photo: Kelvin Ma
The ever-dominant pitcher Allyson Fournier and her softball teammates have now won three straight national championships. Fournier went 35-0, with an astonishing 0.20 ERA, during the spring season, striking out 422 batters and allowing an average of fewer than two hits per seven innings pitched. With so many static images of Allyson pitching, this multiple exposure shows us the progression of her form all in one frame. Check out that arm! 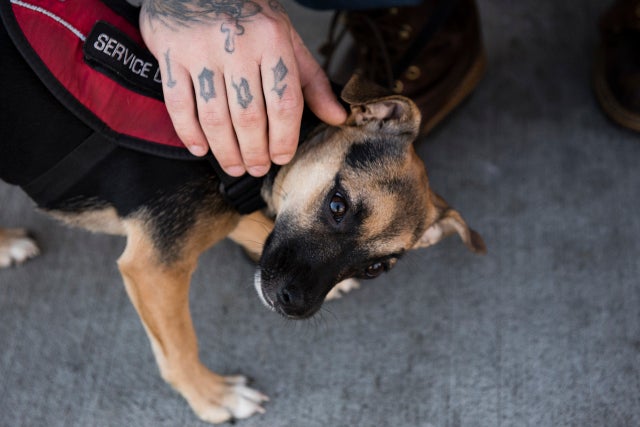 Paul Henry pets Shadow, his girlfriend Amanda’s service dog, as they wait in line on Oct. 6 at a pet clinic in an underserved neighborhood of Worcester, Massachusetts. The clinic was organized by students from Cummings School of Veterinary Medicine. Photo: Alonso Nichols
When the assignment called for photographing a pet clinic for the underserved, it was hard to know what images might be possible. Would there be more than a picture of a student or staff member conducting an exam? How would the pet owners feel about being photographed that day? As people and pets were lining up, I met Shadow and her two humans. When Paul reached down to pick her up, I thought his tattoos said it all. 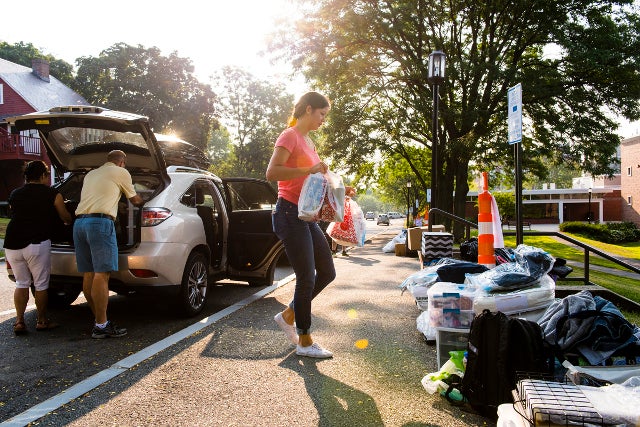 Madeline Orzeske, A19, helps her parents unload their car in front of her residence hall after their drive from Minnesota to Tufts. Photo: Alonso Nichols
As move-in begins early in the morning for first-year undergraduates, it is often quiet and calm, and the light is good. Madeline Orzeske makes the transition from home to life at Tufts. The rest of the day will be hectic, with new people to meet and a buzz of activity, but for this moment, the leaving and the arriving are in balance. 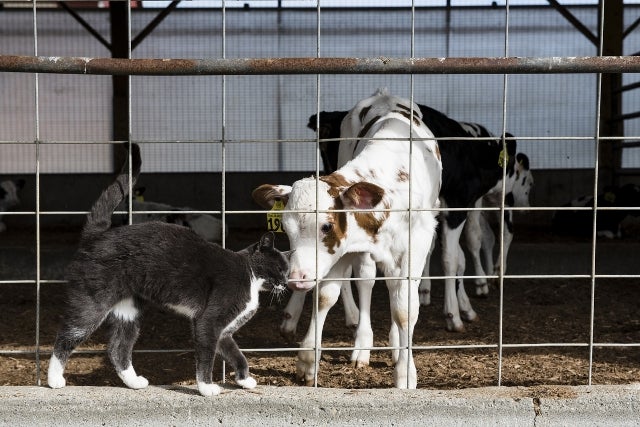 The Tufts Ambulatory Service, which treats farm animals, visits Fairholm Dairy in Connecticut for wellness checkups on Oct. 5. The farm cat Pepper is unruffled by the veterinarians as she nuzzles a calf. Photo: Alonso Nichols
Everyday, Pepper trots over from the farmhouse to see his friends in the calf barn at the Fairholm Dairy. He purrs and prances back and forth along the wire as the interested calves lick and sniff him. Is he failing to get enough attention at home? Or is he just acting on the age-old advice to “love the one you’re with”? 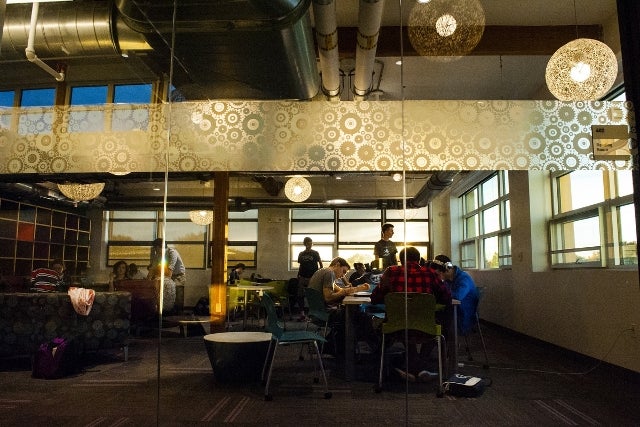 Students in the study room on the fourth floor of the Collaborative Learning and Innovation Complex at 574 Boston Avenue. Photo: Alonso Nichols
Documenting interior spaces of new facilities is a regular assignment in university photography. In the process, the photographer is hoping to find a little something to take the architectural design to another level. The late afternoon sun and the students giving life to the space were just what I was looking for. 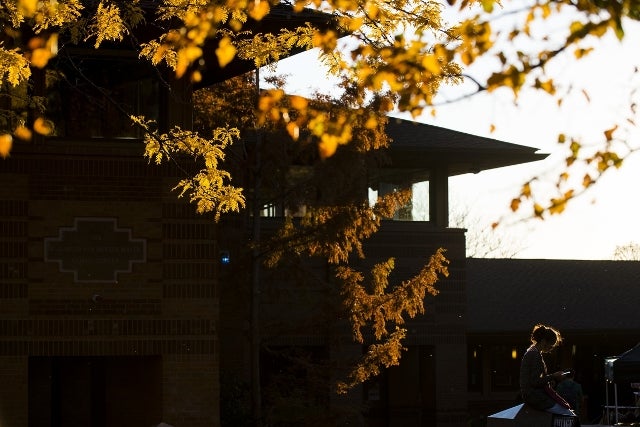 The Mayer Campus Center, photographed on Nov. 3. Photo: Alonso Nichols
A regular challenge for a photographer is to create a fresh frame from something that has been photographed or seen hundreds of times. As the sun began to set and light up the fall foliage, I noticed this student waiting for the shuttle.
Campus Life