The Rewards of Being Studied 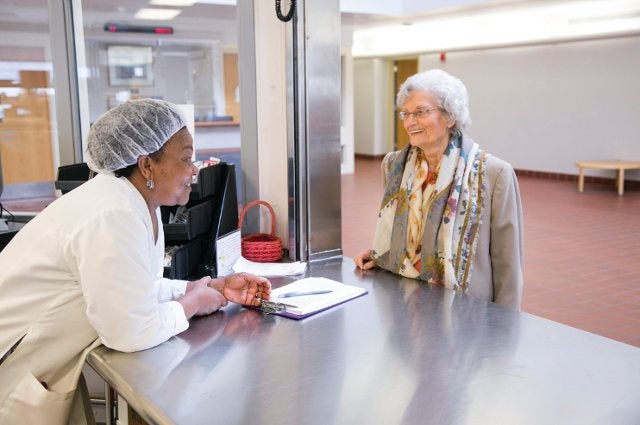 Nia Bissanti of Quincy, Massachusetts, is a record-setter at the Jean Mayer USDA Human Nutrition Research Center on Aging (HNRCA), having volunteered for 67 studies over the past 30 years. It would have been 68, had she not recently been turned down for a study on muscle loss, which is common in people her age. Her muscle mass, the researchers told the petite 90-year-old, was just too good.

The secret to her robust health? “Good food,” she says, “and optimism.”

Bissanti was one of a couple hundred HNRCA volunteers who were celebrated at an appreciation event earlier this year. It was a way to say thank you to some of the 2,339 people who made possible the 62 human research studies conducted at the center over the last five years.

Some volunteers are like Claudette Norville, 64, who took part in a grains study. While she could have lived with 12 weeks of white bread had she been assigned to the refined grains group, she was happy to be in the whole grains group. “That’s all I buy now,” she says, describing how volunteering has changed her eating habits for the better.

Some are couples like Dee Ramee, 63, and Dean Brown, 67, who wanted to contribute to science while making a little extra money during retirement. “For me, it’s about giving back and doing something that you feel is eventually going to help a lot of people,” says Ramee. Learning from the studies she has taken part in is particularly important to her, especially the vitamin trials she has taken part in.

That’s typical of most people taking part in studies, says Sarah Booth, a professor at the Friedman School and the HNRCA’s associate director. She pointed to a 2013 survey of 5,600 volunteers conducted by the Center for Information and Study on Clinical Research Participation, which found that the prospect of receiving results was one of the top five reasons people participate in trials.

At the appreciation event, the volunteers heard from gerontologist Karl Pillemer, a professor at Cornell University, who interviewed more than 1,000 senior citizens for his book 30 Lessons for Living: Tried and True Advice from the Wisest Americans. Pillemer says that the elders he quotes in the book absolutely recommend volunteering.

“This kind of generative activity, where you are giving up your time to benefit other people—and in this case, to advance knowledge and improve heath—is extremely positive,” he says. “Volunteering for anything helps lead to improved health and even to reduced mortality in a lot of studies.”

For Bissanti, the event was a chance to visit with center staff, some of whom she has known for decades. It’s been a long time since her first exercise study, to which she wore dress shoes. (She had to borrow the principal investigator’s sneakers to ride the stationary bike.)

The staffers are meticulous in their jobs, Bissanti says, remembering the time she was called back to the kitchen because she had not finished her assigned breakfast. She returned to find that a grain of sugar remained in the bottom of her drained coffee cup.

The data is important, but the people who provide it are never treated as numbers, as Bissanti knows. She has lived at the HNRCA from time to time, for studies that required overnight stays. If she sometimes had trouble sleeping, it was only because a favorite nurse kept her up—laughing and talking with her.

A version of this article first appeared in the Tufts Nutrition magazine.