The new U.S. Dietary Guidelines, which focus on eating patterns more than individual foods, are stirring controversy among experts 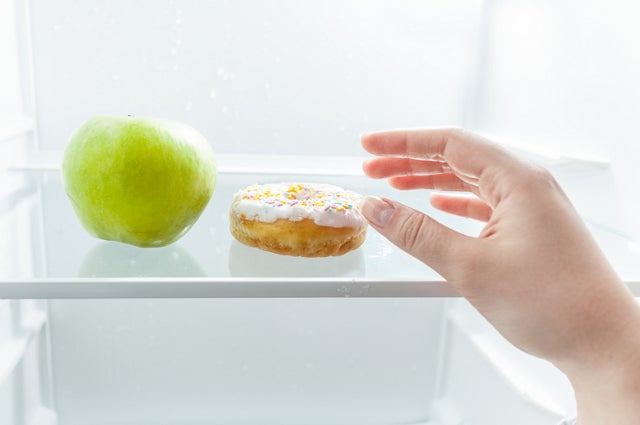 Is it perfect? No one seems to think so. But if you want a plan to gently nudge Americans away from the unhealthy way of eating we’re accustomed to, you could do worse than the 2015 Dietary Guidelines for Americans, which were released on Jan. 7.

The guidelines take the emphasis off single nutrients—such as fats and carbs—and make a case for what foods to eat less of and what to eat in their place. “Finally, we’re talking about dietary patterns,” says Alice H. Lichtenstein, the Gershoff Professor at the Friedman School. “We’re saying that the whole picture is what’s important. And then we’re also saying that there are a lot of different ways of achieving it, and you can customize a healthy dietary pattern to your personal preferences and ethnic background.”

Lichtenstein was one of three Tufts faculty who worked on the scientific report of the Dietary Guidelines Advisory Committee. Lichtenstein served as co-chair; Miriam Nelson, N85, N87, associate dean of the Tisch College of Citizenship and Public Service, was a committee member; and Timothy Griffin, an associate professor at the Friedman School, was a consultant. None had a say in what was adopted in the final guidelines.

Many things in the new guidelines reflect the committee’s findings. “I am really thrilled that the added-sugar recommendation stuck,” Nelson says, referring to new advice that no more than 10 percent of your daily calories should come from added sugars.

Putting an official end to the low-fat diet era, there is no longer a suggested limit on how much fat people should eat, although saturated fat is still capped at 10 percent of calories. Healthy unsaturated fats get the green light.

The guidelines also dropped the previous limit on dietary cholesterol, following the committee’s argument that research has not shown consumption at current levels to be an important influence on blood cholesterol, which is linked to heart disease.

“Coffee made it in—I was happy to see that,” says Nelson, who chaired a subcommittee that found the caffeinated beverage—up to five 8-ounce cups a day—is safe and even has health benefits.

The word “shift” is a motif of these guidelines, as they encourage people to shift from processed grains to whole grains, from butter to vegetable oils and from cookies to fruit for dessert.

“We know that people rarely make major sustained changes in their diet,” Lichtenstein says. “They may go on a fad diet for a brief period of time, but we know they fall off. That’s why we have a continual parade of extreme fad diets. If we’re going to continually improve diet quality on an individual level, people need to make small changes that they are going to be able to stick with lifelong.”

But for all they are pleased with, “some of the disappointments are pretty obvious,” Nelson says.

The most glaring omission has to do with meat. In its scientific report last year, the committee found evidence that diets lower in red and processed meat would not only reduce rates of cardiovascular disease, diabetes and some cancers, they would have less of an environmental impact.

The wording in the final guidelines is not so direct, instead encouraging people to increase the variety of protein in their diets by eating more fish and nuts. In the fine print, men and adolescent boys, who get more than enough protein, are told to cut back on meat, eggs and poultry.

“It’s so wishy-washy,” Nelson says. “It’s not an overarching theme: ‘Eat less meat, especially red and processed.’ It is confusing and unfortunate, and I do think the meat lobby prevailed, and that is too bad, because it is not in the public-health best interest.”

As for the sustainability argument, the secretaries of Health and Human Services and Agriculture announced last October that environmental impact would not be a consideration in the final document, calling it outside “the scope of our mandate . . . which is to provide nutritional and dietary information.”

Griffin, director of the Agriculture, Food and Environment program at the Friedman School, says that even though it didn’t make it into the final guidelines, making the case for sustainability was worth it.

“Somebody reminded me that it took multiple rounds of the Dietary Guidelines to get physical activity in there,” he says, noting that it is now an accepted component of the document. “It gives me some hope for the future.”

Others have pointed out still more shortcomings in the guidelines. Dariush Mozaffarian, the dean of the Friedman School, says “a second glaring omission is that the strong Dietary Guidelines Advisory Committee recommendation to limit starches, such as white potatoes, and refined grains, such as white bread, was not only ignored, but actually countered with specific language that Americans should eat these foods.”

“The guidelines are still highly fat-phobic and implicitly low-fat,” he says, pointing out that while lower total fat is no longer explicitly recommended, there are warnings about the calories in fat-rich nuts and vegetable oils.

The guidelines recommend “lean meats,” even though he says there is little evidence that lean meats are healthier. He says there is extensive evidence, however, that processed meats, such as bacon and hot dogs, increase the risk of cardiovascular disease and diabetes, yet the guidelines say that “these products can be accommodated” in a healthy diet.

The guidelines reflect “obvious fear and inability to recommend reduced intake of almost any food,” he writes. “Clearly, this is sacrificing the health of Americans for the benefit of the U.S. and multinational food industry.”

Lichtenstein acknowledges that the document is not perfect. “Would each person on the committee have done it slightly differently? I think so,” she says. She, for example, doesn’t see the benefit in the specific 10 percent limit on added sugars, calling it an impractical thing for the average person to calculate; better to tell people to avoid the major sources, such as sugary drinks. But she doesn’t want that to take away from what she sees as progress in the guidelines.

“Is the current end product a good one? Yes, I would say it is.”