When unusual diseases break out around the globe, Ashley Greiner hits the trail for the CDC 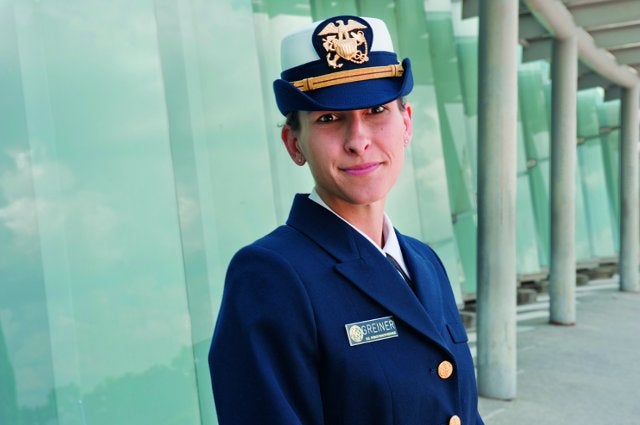 Back in the fifth grade, when Ashley Greiner was asked by her teacher to write a few words about something on her mind, she didn’t miss a beat. She leaned over her desk and got to it. “I didn’t write about the local ice cream place, like the other kids,” she says with a laugh. “I wrote about disease transmission in the southwestern United States.”

Now 31, she has retained her youthful focus. Greiner, who received her M.D. and M.P.H. from Tufts School of Medicine in 2010, remains fascinated by the intricate story of “how disease moves through populations.” The difference is that now she has the whole hulking operation of the Centers for Disease Control and Prevention (CDC) standing behind her. Greiner is a roving scientist who travels the world sniffing out emergent diseases and recommending the best ways to head them off as a so-called “disease detective” for the CDC’s Epidemic Intelligence Services.

It’s a busy, whirling life. Greiner has some trouble naming all the places she’s been over the past year, saying first, “Oh, I don’t even know,” before citing Guatemala, Ghana, Côte D’Ivoire, India, Switzerland . . .” and then drifting off. She generally travels to a site for several weeks, doing fieldwork before returning to CDC headquarters in Atlanta to analyze and interpret her findings, write them up and distribute them for the sake of greater public awareness and safety. This is grunt work for a greater cause.

Greiner grew up in Winchester, Massachusetts, the daughter of an ophthalmologist dad and a neuroscientist mother who liked to go off the beaten path when the family traveled. Once, while vacationing in Costa Rica when Greiner was a child, her mother was outside at dusk and got bitten by a mosquito. A week later, back in the U.S., a rash flared up on her arm—she had contracted dengue. “I was amazed that this little bug could cause such a debilitating illness,” Greiner remembers.

As a medical student, she continued to think simultaneously on two tracks, one large, the other small. “I was always thinking about the individual and the population at the same time,” says Greiner. Anthony Schlaff, director of public health programs at Tufts, describes Greiner as a serious, passionate woman well-matched to her job at the CDC. “It’s perfect for her,” he remarks, “and I wouldn’t be surprised if she stays there for her whole career.”

Tufts is well-represented at the CDC. Joining Greiner in the 2015 Epidemic Intelligence Services class, which totals 81 officers winnowed from 568 applications, are Negar Aliabadi, M07; Ishani Pathmanathan, who graduated from the M.D./M.P.H. program in 2011; Misha Robyn, V09, who received an M.P.H. in 2009; and Charnetta Smith, A03.

Greiner’s life can be intense and unpredictable. Last fall, the CDC was contacted by its counterpart agency in the country of Georgia, part of the Soviet Union until 1991. The Georgian Ministry of Health wanted help investigating an outbreak of Crimean-Congo hemorrhagic fever, or CCHF, that had struck 22 of its citizens, resulting in three deaths. The CDC had two days to whip together and deploy a small team, led by Greiner, to determine the extent of the outbreak, identify risk factors and figure out just how the disease was spreading.

Now, 22 cases are a relatively small number. A basic underlying question, one that recurs again and again in Greiner’s work, has to do with whether the emergence of a disease, in this case CCHF, signals an increase in amplitude of the disease or is simply a reflection of better surveillance—glimpsed one way, a sort of positive news; the other, a potential public health crisis.

On site in Georgia’s rural, rugged countryside, Greiner’s team used a combination of means to gather intelligence. Satellite technology available through Google Earth enabled the team to create a rough map of a dozen villages where CCHF had occurred. Then, over the course of a string of 20-hour days, the team went door to door, interviewing more than 600 residents and taking blood samples for later analysis.

CCHF normally spreads through ticks or contact with infected animal blood. The investigation in Georgia showed that most of the 22 people infected with CCHF had been exposed to ticks or animal blood before falling ill. Their findings were promptly shared with the Georgia Ministry of Health in an effort “to strengthen health systems and control disease,” Greiner says.

Her goal is always larger than the occasion, or the individual nation, because her job is never done. It’s like watching sparks jump from a campfire on a summer night. Deadly infections that spring up in a distant land have a way of spreading from place to place, as has been the case with Ebola. “Disease doesn’t respect borders” is the team leader’s mantra.

Tackling fever in the Georgian countryside may have been a successful campaign, but the path is not always so straight and clear. Greiner tells of traveling to India to investigate a recent bump in Kyasanur Forest disease, a tick-borne viral hemorrhagic fever. “I went there with my mosquito netting, my water-filtration kit and my tent,” she relates. But upon arrival, her hosts said, “Oh no, you won’t need a tent. We would like you to study this other disease.” She went where she was pointed, off to a nearby university lab, and set to work.

Greiner keeps moving on the trail of disasters lurking in the underbrush. She’s been to eight countries over the past year, never yet thrown by this or that unexpected wrinkle in the plan. Next up, she tells me, she’s returning to her old haunts in Georgia at midsummer to lead a door-to-door hepatitis survey, “and then, at the end of August, I’m off to Thailand for a month.”

Only 7% of American Adults Have Good Cardiometabolic Health