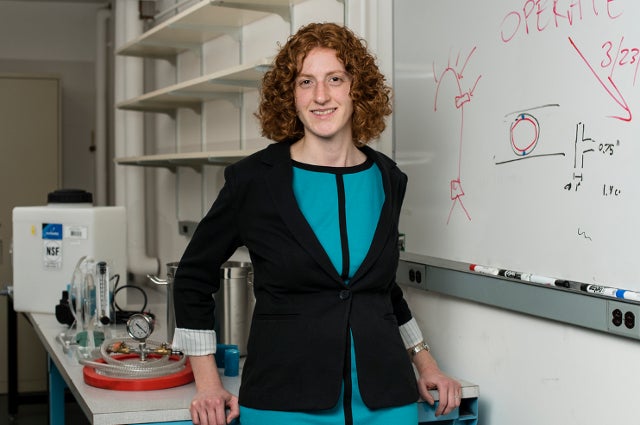 Squishy and imperfect though it may be, the human body is a beautifully complex machine. Every movement, from lifting a finger to taking a step, relies on a broad array of biological levers, pulleys, cables and springs, and as with any other machine, the forces required to operate each part can be measured and quantified, at least in theory. In practice, however, gathering data on mechanics inside the body can be a huge challenge.

“Almost no information is available about blood flow in most arteries,” says Erica Cherry Kemmerling, an assistant professor of mechanical engineering at Tufts.

She should know. Kemmerling studies the dynamics of fluids like blood and air—yes, air counts as a fluid—inside the body. She’s working to slowly reveal the exact ways those fluids behave in a living tissue—accumulating data that could be the key to developing new medical devices and procedures.

In the past, researchers used cadavers or lab animals to test new ideas for treatment. Although that approach can be useful, says Kemmerling, it has its limitations. A cadaver, after all, isn’t living, so its tissues gradually lose their elasticity. Using lab animals allows researchers to experiment on living tissue, but not living tissue that accurately reflects the exact inner workings of humans. In addition to these complications, there’s another major issue that Kemmerling wants to avoid—the tissue in different animals or cadavers has slightly different properties, making controlled experiments a challenge.

In order to test treatments—and explore the dynamics of cardiovascular disease—in a controlled, repeatable manner, Kemmerling is building three-dimensional models of arteries and other structures. If she does her job just right, she says, she and other researchers might be able to use these simulations to get more accurate experimental data than would otherwise be possible—and simultaneously avoid the added costs and training required to work with animals and cadavers.

With an understanding of the mechanical properties of human arteries, she adds, her team could design and 3D print a lifelike plastic model of an artery suffering from stenosis—a disorder that narrows the area where blood can freely flow. They could then use the model to test different devices that help improve blood flow, such as stents, which hold narrowing arteries open.

“We could optimize the design of it, by trying a few different combinations of shapes and materials to test which one holds the artery open most effectively,” she says. “You could never, never do that in a person. But a model that’s a piece of plastic, who cares if you break it?”

It’s a tantalizing idea. Testing devices on a lifelike replica of human tissue might help reduce the time and expense required to get approval from the FDA, the main regulating body for medical devices in the U.S. The practice could even have a major impact on the way new lifesaving treatments are developed. The main challenge Kemmerling faces is that the human body is inherently complex.

Replicating the exact shape and surface features of a blood vessel can be tough—and finding materials to mimic its mechanical properties can be even tougher. In addition to developing plastics that mirror the strength and elasticity of a human artery, Kemmerling is also working to create fluids that approximate the behavior of blood itself.

Blood, she notes, is what’s known as a “non-Newtonian fluid.” Like ketchup or quicksand, its viscosity can change depending on the forces exerted upon it. It flows easily through blood vessels, but can change its properties, slow down and become more viscous as cells within it run into each other.

In the future, Kemmerling’s team hopes to start using a specialized type of synthetic “blood”—a viscous mix of water, glycerin and microscopic particles of nylon—inside their 3D artery models, helping them gain even more detailed information about the flow of blood inside a real human artery.

At the moment, their work takes place on a relatively small scale: each model is less than a foot in length. Kemmerling has her sights set high, however. Ultimately, she says, she wants to scale up from small benchtop tests, and build a working model of the entire human circulatory system.

That’s no small task. There are billions of capillaries in the body—tiny tubes, less than 10 microns in diameter, that allow blood and oxygen directly into the tissues that need them. “It’d be impossible to build all of those,” she notes. “If you spent five minutes on each capillary, it’d take you years. I’m not planning on keeping my graduate students here that long.”

Instead, she says, her lab will work to find the ideal balance. They’ll have to identify the minimum number of features they’ll need to add to the model to get accurate data. They’ll also have to determine which ones they can leave out to avoid unnecessary complexity.

It’s an ongoing struggle, but one that Kemmerling is excited to take on. “One of the beauties of engineering is that you can make something that will help people within your lifetime,” she says. “You can watch it change the way health care works.”