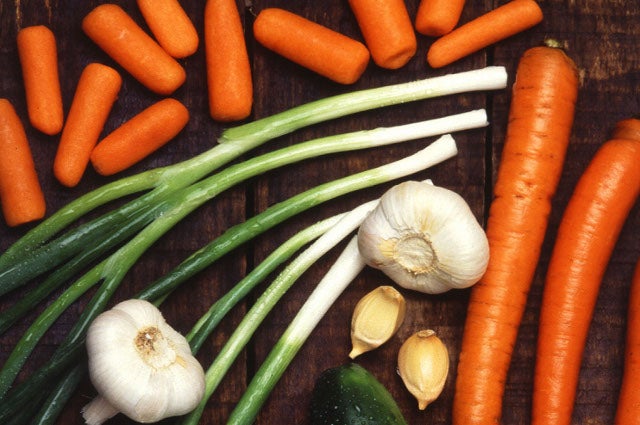 Very few of us eat enough fruits and vegetables, and for the more than 47 million Americans who participate in the Supplemental Nutrition Assistance Program (SNAP), formerly known as food stamps, that number is a bit smaller still.

But what if healthy fruits and vegetables, like leafy greens or crisp apples, came with a financial incentive for SNAP participants? Would a tiny bit of extra spending power, just a little over $6 a month, be enough to compel shoppers to move from the snack aisle to the produce bin?

The answer turns out to be a modest yes, according to Parke Wilde, an associate professor at the Friedman School of Nutrition Science and Policy. He spoke about recent research on this and other proposed SNAP program changes, which aim to promote healthy diets while still helping people get enough to eat, at the White House Conversation on Child Hunger in America on Jan. 27.

“The goal of SNAP, above all, is to protect food security and to prevent hunger,” Wilde said at the event. “It also is to promote dietary quality. And these goals are not at all necessarily in competition with each other.”

In late 2011, the USDA Food and Nutrition Service launched the Healthy Incentives Pilot program in Hampden County, Massachusetts, where more than 5,000 low-income households were given an extra 30 cents for every dollar of SNAP benefits that they spent on a targeted list of fruits and vegetables offered by participating retailers.

When the 12-month program ended, Wilde and researchers at Abt Associates found the incentive had worked. It bumped consumption of healthy fruits and vegetables by almost a quarter cup a day, a 26 percent increase over SNAP participants not enrolled in the pilot. A quarter cup of extra veggies may not sound like much, but the researchers say it’s “large enough to be nutritionally relevant.”

The study also found that the overall calorie intake of participants who ate more fruits and vegetables did not rise—good news for those concerned with obesity rates.

But there was an underlying mystery associated with the pilot program. The quarter-cup increase in fruits and vegetables that participants reported eating was more than one would expect, based on spending data captured at the checkout counter.

Wilde says the difference could be chalked up to confusion over exactly which fruits and vegetables qualified for the extra financial incentive. White potatoes, fruit juice and any fruits or vegetables with added salt or sugar were excluded.

For example, a participant may have purchased canned peas, but if those peas contained added salt, they wouldn’t qualify for the incentive. Researchers also did not have data on fruits and vegetables that participants bought at non-participating retailers, which may account for some of the disparity.

Wilde, whose most recent paper on the pilot program was published in December in the journal Applied Economics Perspectives and Policy, says the program may have persuaded SNAP participants to increase their consumption of all types of fruits and vegetables, including those that didn’t earn the incentive. And, he adds, the pilot may have played a positive role in influencing awareness among participants.

“It could be the whole pilot program had a marketing effect in addition to the explicit price incentive,” he says. “Promotion of healthy diets, backed up by a real financial incentive, increases fruit and vegetable intake. It’s a sign that marketing plus price incentive is more effective than either alone.”

Clare Leschin-Hoar is a freelance writer in San Diego.