A Medical Pioneer in the Mississippi Delta

At the height of the Depression, Dorothy Boulding Ferebee, M24, ventured south, braving Jim Crow, to blaze a trail in public health 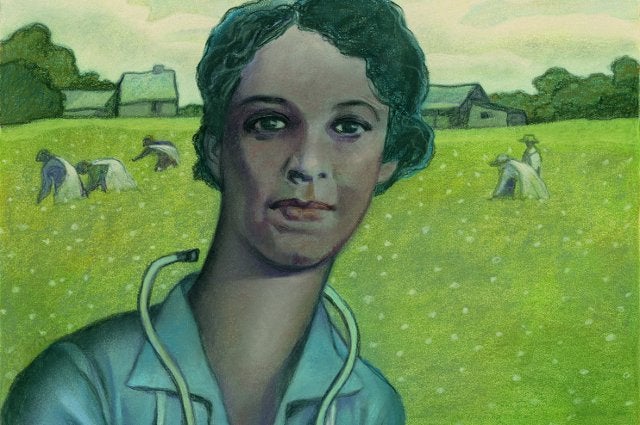 Dorothy Boulding Ferebee, M24, was one of the most notable early graduates of Tufts School of Medicine. Raised in a solidly middle-class family on Boston’s Beacon Hill and educated at Simmons College before entering Tufts, Ferebee rose to become one of the best-known African-American women in the U.S. by the mid-20th century.

Reaching neglected populations through medicine was her life’s recurring theme, best evidenced in the case of the Mississippi Health Project, which she pursued every summer between 1935 and 1941.

Here we present an adapted excerpt from Diane Kiesel’s recently published biography of Ferebee that highlights her first visionary medical excursion to the Mississippi Delta in 1935, years before anyone else had imagined such a thing.

The posters went up in churches, on crepe myrtle trees and along rotting walls of one-room schoolhouses all over the Mississippi Delta, addressed to the “colored people” of Bolivar County and written in large letters, as if by a huckster announcing the arrival of the traveling circus: “Notice! Colored People! Everyone Come to a Clinic for Health Advice.” The anonymous author promised a genuine lady doctor from Washington, D.C., Dr. Dorothy Boulding Ferebee, and her staff of “trained colored assistants” who would treat the sick of their race. The Mississippi Health Project was coming to town.

Lord knows, the “colored people” of Bolivar County needed all the help they could get in the summer of 1936. While the rest of the population clawed their way out of the Great Depression that had engulfed the decade, blacks in the Delta still suffered the same miserable existence they always had, with no end in sight. Nearly a quarter of all African Americans in Mississippi were illiterate. What little education was available in segregated schools in the Jim Crow South was abandoned during cotton-picking season so children as young as 8 could work the fields.

Most African-Americans in the Delta worked the land as tenant farmers or sharecroppers, akin to modern-day slavery. Entire families earned the grand sum of $50 a year, sometimes less.

A dozen women had made their way to Mississippi in 1935, [the previous, inaugural year for the Health Project]. Besides Ferebee and Mary Williams [a nurse], the only volunteers with health-care experience were Ella Payne, a dietitian with a master’s degree from the University of Kansas, and Genevieve Mayle, a graduate nurse. Ida Jackson [a native Mississippi educator who first conceived a public service program for her home state] ostensibly came to lead the teaching program, assisted by Ruth Handy, who held a master’s degree from Columbia University, and Marion Carter. They, too, ended up acting as nurses. Ferebee’s 20-year-old sister-in-law, Connie Ferebee, and a woman named Elsie Cain were brought along as secretarial assistants. Irma Barbour, a Howard University student; Nell Jackson, who was Ida’s niece and a student at the University of California studying French; and Alice Avery, who had a degree in art, came to help, too. 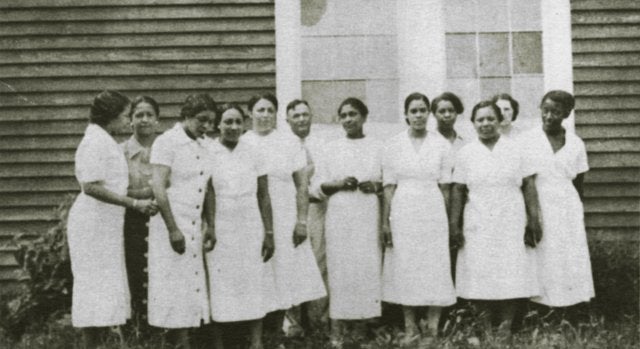 Dorothy Boulding Ferebee, fifth from left, appears with her team members in Mississippi.
Looking back from the 21st century of superhighways, central air-conditioning, jet travel and laws against racial discrimination, it is tempting to underestimate the strength and bravery of Ferebee and the women who went with her to Mississippi. Given the kudos it brought Ferebee and the sorority [Alpha Kappa Alpha, the black sorority that had conceived and funded the excursion, and of which Ferebee and Jackson were prominent members], it is equally tempting to accuse them of undertaking the project because of how it would enhance their reputations. But in 1935 they had no idea how it would turn out.

The sun rose at 4:48 on the morning of July 5, 1935; the temperature reached close to 90 degrees in Washington, D.C. [the group’s embarkation point], and got steadily hotter farther south. It was hardly an ideal day to begin an 830-mile road trip. Cars were not air-conditioned, and decent middle-class women did not leave the house without wearing dresses, silk stockings and girdles. Ferebee loaded up her husband’s car with medical supplies, three passengers and their luggage. Ever the field marshal, she dictated what the women could bring: one suitcase filled with white smocks and cool cotton dresses.

Not until Gen. Dwight D. Eisenhower plotted the invasion of Normandy in World War II could there be as much planning as that done by Alpha Kappa Alpha (AKA) to set up the Mississippi Health Project. The supreme allied commanders were Ida Jackson and Dorothy Ferebee, who took Jackson’s inspiration and turned it into one of the most successful social welfare projects in history.

Dorothy provided the blueprint for a health clinic. The goal, she wrote, was to “carry medical service, its instruction and understanding, to a community where public health work has been greatly neglected.” She did not exaggerate the need for the Mississippi Health Project.

All of Mississippi had its share of problems. The smallpox vaccine had existed since 1796, but between 1930 and 1932, there were nearly 2,000 cases of the disease in the state. Black infant mortality was 61 per 1,000, compared with 44 for whites. Holmes County residents suffered from TB, scarlet fever, typhoid and dysentery.

From the moment she met Ida Jackson in December 1934 until she led a multicar caravan into the Deep South on July 5, 1935, Ferebee charmed, begged or bullied key people to support the AKA clinic. Together, they raised money, selected staff, arranged transportation to Mississippi, obtained medical supplies, secured the blessing of state and local—meaning white—officials and tried to convince landowners to let their sharecroppers participate.

Ferebee arranged the clinic schedule to coincide with the summer lay-by, that period between chopping the cotton and picking it. Yet it became clear that Dr. C.J. Vaughn [the sympathetic white male director of the Holmes County Health Department] was right [when he cautioned her not to expect much of a turnout]. Vaughn’s warning that patients could not travel to the clinic was true, but poverty wasn’t the only obstacle.

The landowners were wary of allowing visits to a health clinic run by Negro strangers who, for all they knew, were more interested in agitating than inoculating. “To our astonishment, 13 owners refused our services and forbade their sharecropping families to leave the plantations to attend any one of the five proposed clinics,” Ferebee wrote years later. Only one was willing to participate.

“So here we are, in Mississippi, with all the materials and drugs that we had bought, all of the things necessary for the health of young children, and we couldn’t use them, because the plantation owners would not allow the Negroes to come to us. So we had a consultation and agreed, ‘Well, if they can’t come to us, we’ll go to them,’ ” Ferebee recalled.

Bringing Medicine to the People

With Dr. Vaughn in tow, Ferebee, Ida Jackson and Ruth Handy drove from place to place to pay friendly calls on the recalcitrant landowners. All but one relented, but there was a condition. The sharecroppers were not allowed to leave the plantation, so the project team had to come to them. 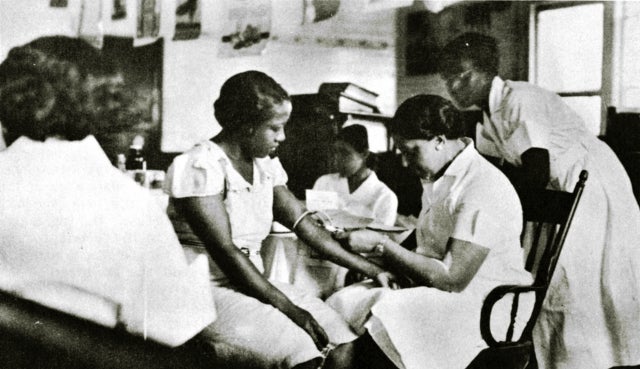 Always actively engaged, Ferebee administers a blood test to a woman at a Delta clinic in 1938.
The days were long and hard, starting before dawn and continuing into the evening. Rather than sip coffee in those calm moments at sunrise before the clinic opened, the volunteers used that precious time to warm up their cars and load them with vaccines, sheets, registration forms, needles and uniforms. They made a quick trip to the local ice house for ice to preserve the vaccines, and they were good to go.

The vehicles formed history’s first mobile health-delivery system as the drivers fanned out through the broiling countryside, logging hundreds of miles each day. There were mishaps, documented in Ferebee’s scrapbook. “Stuck in the mud—a frequent occurrence,” was the caption she wrote beneath a picture of the health team pushing a car.

Once they reached the day’s destination farm, they parked under a tree in the cotton field or next to an old school or crumbling church and set up a clinic. Behind the wheel in the lead car, Ferebee saw the grinding poverty of one-room shacks, some without screens or front doors. Within their crumbling walls they often housed 10 to 15 family members.

Ferebee led the automobile caravan over the dirt roads of Holmes County and would continue to do so year after year. Her colleagues came to trust her sense of direction after it became clear that following their own instincts led to ditches and dead ends.

“When we traveled, we encountered nothing but dust. One couldn’t see the car in front,” Ferebee explained years later. “No routes were marked; you didn’t know where you were. But fortunately, there’s something about me that I can always come back from where I’ve been. So when the members of the team noticed that even without markings or signs, I could always get home, they made me the leader of the procession. . . . They said, ‘Wherever we’ve been, she can bring us home.’ It was because I have a knack of recognizing a certain tree stump, or a certain rock, or a certain object that stands out, assuring me, ‘This is the way I came.’”

At each location the volunteers set up clinics from scratch. They hung clotheslines between trees and placed sheets over them to create privacy. As many as 800 sharecroppers and their families lived on each plantation. Once they got the OK from the owners, they came to the clinic in the morning on foot, in cars and in horse-drawn wagons. They didn’t stop coming until nightfall.

The sharecroppers wanted health care, but some were wary. As parents lined up with their whining children for vaccinations, the plantation overseers sat close by on fidgety horses with guns in their belts and leather whips in their boots. They wanted to hear what their workers were telling Ferebee.

There were other obstacles. Many of the mothers had their own “medicines.” To ward off disease in their children, they placed bags of grasshoppers’ nests around their tiny necks. To encourage the growth of healthy teeth, they put buzzards’ feathers around their necks, too. Ignorance was pervasive. Some mothers struggled with simple questions from Ida Jackson and Ruth Handy, who were keeping the records. Child’s name? “Fat Back.” Date of birth? “She was born around cotton-picking time.”

Hanging back, curious yet cautious, were dirt-poor whites. Their children could have benefited from Ferebee’s services, but they did not dare step forward and ask; the taboos against racial mixing were just too great.

The Mississippi Health Project volunteers trudged home after three weeks, having endured 21 days of relentless heat, 5,324 miles of driving over the country’s worst roads through swarms of mosquitoes. When all was said and done, the project was Dorothy Ferebee, Ida Jackson and AKA’s shining hour. The sorority’s tireless work in one of the worst parts of the country, at one of the worst times in history, brought health care to 15,000 of the nation’s poorest and most powerless.

Adapted from She Can Bring Us Home: Dr. Dorothy Boulding Ferebee, Civil Rights Pioneer, by Diane Kiesel (University of Nebraska Press, © 2015 by the Board of Regents of the University of Nebraska). Used with permission. A former award-winning journalist, Kiesel is an acting justice of the New York State Supreme Court.

A version of this article first appeared in the Fall 2015 issue of Tufts Medicine magazine.