Stay Active for a Healthy Heart

Even for people in their 70s, exercise can lower risk of cardiovascular disease 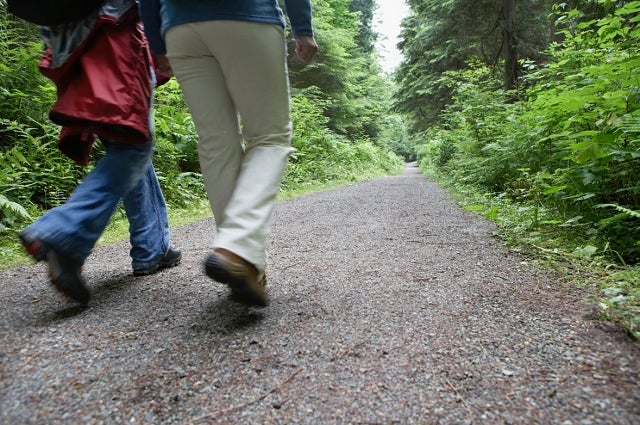 People in their 70s can likely lower their risk of stroke and heart attack with regular moderate exercise such as walking, according to a Tufts study, which provides some of the first evidence that continuing to exercise as we age really does make a difference.

The cause of nearly a third of all deaths, cardiovascular disease is the number-one killer worldwide, according to the World Health Organization. In the United States, more than a third of all adults have some form of the disease, including about half of people over age 60.

“If you’re more active, you’re going to do better—especially with respect to heart and brain health,” says Dariush Mozaffarian, dean of the Friedman School, who led the study, which was published online in November 2015 in the journal Circulation. “It reassures people that even after age 75, being active can make a big difference.”

What’s more, the types of exercise the researchers studied were activities many senior citizens enjoy: walking, hiking, biking, swimming and mowing or raking the lawn. “You don’t need to be an ironman,” says Mozaffarian. “You can walk or garden and not only have fun, but know you’re protecting your heart and brain.”

Researchers have known for some time that for most adults, regular exercise reduces the risk of heart attack and stroke. But few studies focused on whether those benefits held true for older people, too. Mozaffarian and his research colleagues at the University of Porto in Portugal, the New York Academy of Medicine and the University of Washington believe theirs is the first large, community-based study to include enough participants over age 70 to provide statistically strong evidence of the rewards of exercise in older populations.

The finding is significant because people age 65 and older are one of the fastest-growing segments of the U.S. population. In 2010, that group represented about 13 percent of the population, but it is projected to reach 20 percent by 2040, according to the U.S. Department of Health and Human Services.

Mozaffarian and his colleagues used data collected on more than 4,200 men and women enrolled in the Cardiovascular Health Study from 1989 to 1999. The researchers looked at people with an average age of 73 who had no cardiovascular disease at the beginning of the study. By the end of the 10-year study, the group had experienced more than 1,100 cardiovascular events.

The researchers saw a clear link between more physical activity and lower instances of heart disease, stroke and coronary heart disease (sometimes known as clogged arteries), even among the oldest people in the study. The scientists paid particular attention to walking, noting that while any walking at all appeared to lower risk, intensity and duration of physical activity still counted.

Study participants who were able to walk faster than three miles per hour experienced about half as many cardiovascular events as those who could manage only two miles per hour or less. Walkers who covered greater distances or spent more time at it appeared to lower their risk of heart attack and stroke even more.

Mozaffarian notes the study does not prove that exercise translates into less cardiovascular disease, but rather shows a link between the two. It can’t be ruled out, he says, that it’s the healthier people without cardiovascular disease who are able to exercise more. Still, Mozaffarian and his colleagues’ findings proved to be robust by several sensitivity analyses, including controlling for participants who reported known diseases or ill health. When he considers all that plus the strong causal relationship between exercise and heart health in younger adults, Mozaffarian knows what advice he’d give an older member of his family.

“Some people will say to their 80-year-old grandmother or grandfather, ‘Do what you want and eat what you want,’ ” Mozaffarian says. “Now we know there’s a substantial benefit to maintaining these types of activities, especially walking.”