Five Tufts Researchers Are Among World’s Most Influential

Work by these scientists is most frequently cited by their colleagues

Five Tufts researchers have been named to Thomson Reuters' 2015 list of the World’s Most Influential Scientific Minds. The list recognizes the top thinkers in 21 fields who between 2003 and 2014 published the most papers cited highly by other scientists. “When peers read and cite the work they find the most useful and significant, it is a concrete, quantifiable marker of esteem,” the report notes. Thomson Reuters is a multinational media and information company.

Named to the list are Jeffrey Blumberg, John Coffin, David Kaplan, Andrew Levy and Dariush Mozaffarian. “Everyone acknowledged in this book,” the report says, “is a person of influence in the sciences and social sciences. They are often the researchers now on the cutting edge of their specialties. They are performing and publishing work that their peers recognize as central to the advancement of their science. These researchers are, thus, among the most influential scientific minds of our time.” 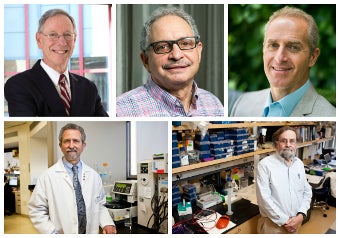 Clockwise, from upper left: Andrew Levey; David Kaplan; Dariush Mozaffarian; John Coffin; and Jeffrey Blumberg.
Jeffrey Blumberg is a professor at the Friedman School of Nutrition Science and Policy and director of the Antioxidants Research Laboratory at the Jean Mayer USDA Human Nutrition Research Center on Aging at Tufts. His research has focused on how antioxidant nutrients promote health and prevent disease as we age. He has also done work to determine the dietary requirements for these nutrients. He has published more than 300 scientific articles and serves on the editorial boards of several journals.

John Coffin is the American Cancer Society (Massachusetts Division) Professor of Molecular Biology at Tufts School of Medicine. He directs a lab at the Sackler School of Graduate Biomedical Sciences that is advancing our understanding of retrovirus biology, including HIV biology. His work encompasses genome structure and genetics, mechanisms of replication, co-evolution of viruses and hosts, and pathogenic mechanisms. The former editor of the Journal of Virology, he is senior editor of Retroviruses (Cold Spring Harbor Laboratory Press, 1999), considered the definitive work in the field. A member of the National Academy of Sciences, he has contributed more than 125 articles to the scientific literature, largely on the mechanisms of transformation by and replication of retroviruses.

David Kaplan is the Stern Family Professor of Engineering and chair of the Department of Biomedical Engineering; he is also a Distinguished Professor who holds appointments in several other Tufts schools and departments. His research focuses on biopolymer engineering with an emphasis on biomaterial engineering and regenerative medicine. He has published more than 600 peer-reviewed papers and edited eight books. He directs the Tissue Engineering Resource Center, a collaborative effort between Tufts and Columbia University. He has received a number of awards for teaching, is an elected fellow of the American Institute of Medical and Biological Engineering and has received the Columbus Discovery Medal and the Society for Biomaterials Clemson Award.

Andrew Levey is the Dr. Gerald J. and Dorothy R. Friedman Professor of Medicine at Tufts School of Medicine and chief of the William B. Schwartz Division of Nephrology at Tufts Medical Center. He is involved with research groups at Tufts and around the world studying ways to gauge kidney function and better understand the burden of chronic kidney disease. He has been honored by the National Kidney Foundation for his lifetime of dedication to the treatment of kidney diseases. In 2013 he was named the recipient of the American Society of Nephrology’s Belding H. Scribner Award, presented to individuals who have made outstanding contributions that have had a direct impact on the care of patients with kidney disease.

Dariush Mozaffarian is dean of the Gerald J. and Dorothy R. Friedman School of Nutrition Science and Policy. A cardiologist and epidemiologist, he has done research that has demonstrated the connections between lifestyle and heart disease. He has written or co-written more than 200 scientific publications on the diet and lifestyle factors that contribute to diabetes and cognitive decline as well as heart disease and stroke, which are the leading causes of death worldwide. Throughout his career, Mozaffarian has used scientific evidence to inform nutrition policy. He notes that providing basic nutrition advice to people and relying on personal responsibility has not been enough to improve public health.