Going After the Youth Vote 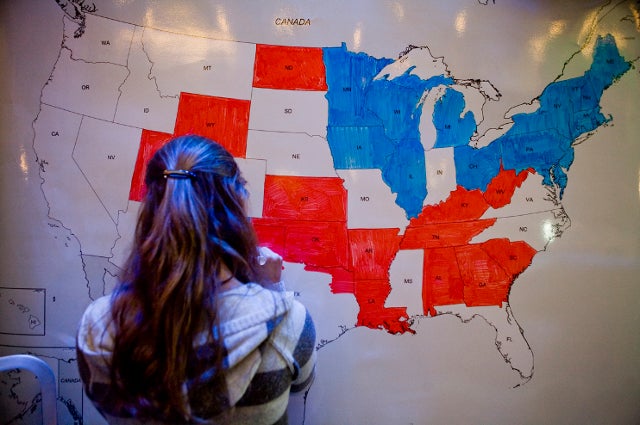 If you’re wondering who really wields the power to influence this year’s presidential election, think young. A new Tufts report points to the importance of getting voters ages 18 to 29 to the polls.

The report out of the Tisch College for Citizenship and Public Service, “Youth Electoral Significance in 2016,” ranks the top 10 states and congressional districts where young people are poised to have a disproportionately high impact on races for congressional seats and the presidency. Iowa and New Hampshire are at the top of the list.

The ratings will give political campaigns and national organizations like Get Out the Vote and Rock the Vote the tools to refine their outreach strategies, says Kei Kawashima-Ginsberg, director of Tisch College’s Center for Information and Research on Civic Learning and Engagement (CIRCLE), which did the research.

The report [PDF] emphasizes “how much influence young voters can have when they are asked to become involved,” says Kawashima-Ginsberg. “We believe information and data access can go a long way to help convince voters to turn out to vote and to support their party.”

Youth votes are critical for all contenders for political office. The 84 million millennials, those born between 1982 and 2000, are poised to become the largest voting bloc in the United States.

Despite that, millennials are increasingly disengaged. There are structural barriers, says Kawashima-Ginsberg, such as registering to vote, which can be perceived as complicated and difficult, “so they won’t do it,” she says. “That’s hopefully starting to change because of online registration, which just became available in Massachusetts.”

And then there are prevailing attitudes, like frustration with a lack of inspiring political leadership, anger over not feeling included in the political discourse, and outright apathy. “They can feel that their vote simply doesn’t matter,” says Kawashima-Ginsberg. “Young people simply don’t get asked to get involved or vote. So they don’t. When they are asked, research shows that they do vote.”

These factors contribute to a trend that is particularly obvious in election years. Millennials have the lowest voter turnout rates in the nation: just 45 percent voted in the last presidential election, compared with 73.5 percent of voters ages 65 to 74.

For the report, CIRCLE developed what it called a youth electoral significance index to rank the potential of youth votes to affect 2016 presidential, Senate and House races. The index to determine the top ten states incorporated several indicators of voter participation, including the relative share of the youth population, the presence of colleges and universities in a state, whether the state is expected to have a competitive presidential or Senate race, and if the state has passed laws designed to increase voter registration, especially for young people. Online registration and a high concentration of college students “can potentially help mobilize youth,” the report states.

Iowa was ranked highest in the presidential index, along with New Hampshire, which had an almost identical score. Young Iowans famously boosted the prospects for Barack Obama in 2008—they voted at a much higher rate than young voters elsewhere. Iowa also recently enacted online registration, and has a relatively large proportion—35 percent—of 18-to-29-year-olds attending college in the state.

Iowa’s Latino population has more than doubled since 2000, and “a disproportionate number of Iowan Latinos are young,” the report says. “Mobilizing Latino youth could further influence the election.”

Pennsylvania came in third on the index. Fifteen percent of its 1.96 million young citizens are African American, the highest-turnout group; African-American voters turned out at a higher rate than whites, Hispanics, Asians or other groups nationally among those ages 18 and 19 in both the 2008 and 2012 elections. The state also has 404 colleges and universities, and online registration will be available for the first time during this year’s presidential election, “potentially making voter registration more convenient,” says the report.

Ohio ranked fourth and has the highest ratio of young people with children among the top 10 states, “suggesting that many Ohio youth may be more likely to see issues that are relevant for young families, such as health care, early education and minimum wage as top priorities,” the report suggests.

Nevada is ranked 10th, with its pre-registration and online registration laws lowering the barriers to voter registration, but it has a low percentage of college students. Young Nevadans also are likely to register as unaffiliated/independent, which means “candidates from all parties have much to do to win their support,” says the report.

“Both [political] campaigns and nonpartisan organizations have to deliberate where to best invest limited resources,” says Kawashima-Ginsberg. “They know it’s critical to tap into the enormous energy and power of voters ages 18 to 29. Young people can have a powerful impact, and we believe this engagement is a healthy indicator of civic involvement in the democratic process.”