The Importance of Electrical Signaling in Cells 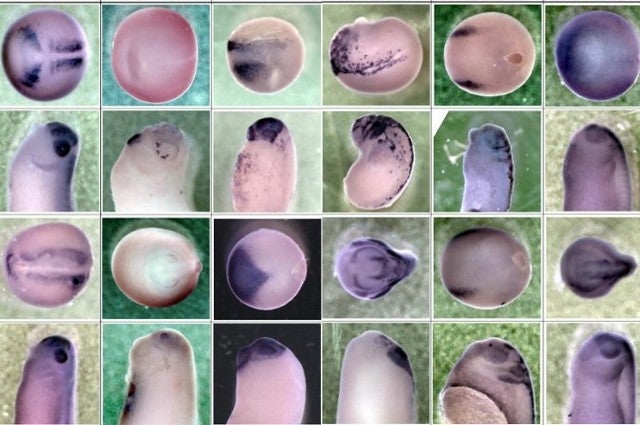 Tufts University biologists have discovered the bioelectric mechanism by which a rare genetic disorder causes facial abnormalities, a finding that could lead to preventive measures and treatments for a host of disorders, from birth defects to cancer.

For the study, published on Feb. 11 in the Journal of Physiology online in advance of print, lead author Dany Spencer Adams, a research associate professor in the Department of Biology in the School of Arts and Sciences, and colleagues at Tufts, MIT and RMIT University in Australia used an embryonic frog model to demonstrate for the first time that faulty bioelectric signaling is responsible for the craniofacial defects associated with the genetic disorder Andersen-Tawil Syndrome (ATS). Those deformities—a broad forehead and nose, wide-set eyes, low-set ears and a small jaw and chin—are determined during embryonic development.

Patients with ATS have a mutation in the gene that codes for the potassium ion channel known as Kir2.1, a crucial piece of cell machinery that maintains cells’ electrical charge by regulating the flow of positively charged potassium ions in and out of cells. If Kir2.1 malfunctions, it affects how facial features develop, among other things.

Cardiac arrhythmias and muscle disorders also common in ATS patients had previously been linked to electrophysiology, but the craniofacial defects had not been explained.

The new findings, Adams says, “are not just the first-ever model of why one rare mutation causes craniofacial anomalies. They actually may apply to the very much more common fetal alcohol syndrome.”

While only about 100 people in the world have ATS, it’s estimated that more than 7 million suffer from fetal alcohol syndrome, she says. Research by other scientists has found that alcohol binds to the Kir2.1 ion channel, leading some to speculate that abnormal ion channel function may cause the distinctive facial features associated with fetal alcohol syndrome, just as it does in ATS.

In their study, Tufts scientists used light to control ion channel activity—the first use of the emerging field of optogenetics to alter embryonic development and probe a disease state by manipulating bioelectric signaling. Using light to precisely manipulate and monitor cells that had been genetically modified to express light-sensitive ion channels, the researchers showed that altering the natural bioelectric patterns within the outer cell layer of the frog embryos during early development caused abnormalities in the skull and face, while bioelectric changes later in development did not.

The work bolsters earlier findings by Tufts researchers that bioelectric signaling in many cell types, not only nerves, plays a major role in how cells create and repair complex anatomical structures, says Michael Levin, A92, director of the Tufts Center for Regenerative and Developmental Biology and a co-author of the study.

With that knowledge, he says, it may be possible to alter bioelectrical signaling to correct the effects of genetic mutations or other developmental defects. “That’s the big picture here,” says Levin, who is also the Vannevar Bush Professor in the Department of Biology.

The research shows that patterns of electrical activity throughout tissues are a key piece of the information exchange by which cells coordinate their activity to produce anatomical outcomes, Levin says.

Other researchers have linked a defective Kir2.1 channel to a disruption in the flow of electricity. In Andersen-Tawil Syndrome patients, the muscles, including the heart, don’t work properly. Typical symptoms include heart palpitations, fainting and weakness when waking up or after exertion. “People who have this syndrome go to the doctor with cardiac arrhythmia or periodic paralysis—they just kind of freeze,” says Adams.

The Journal of Physiology study suggests that the ability to exert some control over ion channels like Kir2.1 could dramatically alter what’s going on in the cells of a developing embryo. Treatments to prevent the formation of facial abnormalities, such as those associated with Andersen-Tawil Syndrome and other conditions caused by malfunctioning ion channels, could occur without having to alter the genetic sequence, Adams says, or even necessarily knowing which gene is affected.

“We already have drugs that are approved for human use that alter ion flux,” says Adams. “Drugs like Prilosec, Nexium and other proton-pump inhibitors—they all target and change ion movement. Because we have targeted drugs, we already have ways to go in and prevent the problem.”

Such therapies, Levin says, would target the cells’ electrical properties as the key control knob, which can be manipulated by many easily accessible ion channels.

Bioelectricity is also implicated in the development of cancer, says Adams. Cancer cells are too positively charged, compared with healthy cells, and some research has shown that restoring malignant cells’ voltage through ion channel regulation tends to return them to a normal, non-malignant state, she says.

The Adams and Levin labs are two of just a handful in the world studying bioelectricity in cells outside the nervous system. In earlier research, the two teams demonstrated that bioelectric signaling is involved in regulating gene expression and anatomical structure in a range of organs by dictating the fate of cells and tissues during development, regeneration and cancer suppression.

“We have been able to show that it’s not just nerve cells that communicate electrically,” Levin says. “As embryonic cells are cooperating to form structures like the brain, they exchange information electrically to figure out what pattern they’re supposed to be making and whether the current pattern is correct or needs to be repaired or remodeled,” he says.

“These bioelectric properties are just as important as biochemical signals,” Adams says, “and in some ways are much easier targets for therapy than the genetics.”