Discovery may shed light on fetal alcohol syndrome, other conditions 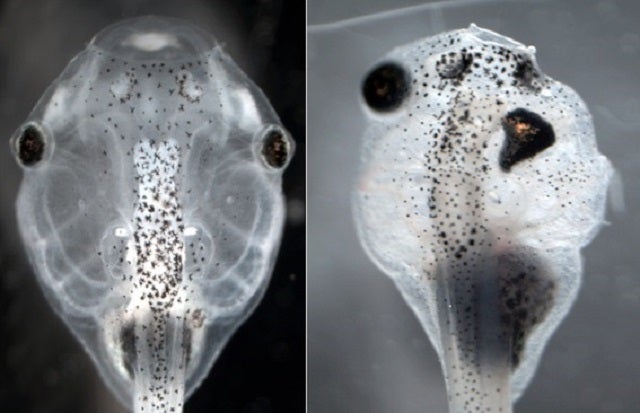 MEDFORD/SOMERVILLE, MASS. (Embargoed until 7 PM EST, Feb. 10, 2016) -- Tufts University biologists have discovered the bioelectric mechanism by which the rare genetic disorder Andersen-Tawil syndrome (ATS) causes facial abnormalities, a finding that could lead to preventive measures and treatments for a host of disorders, from birth defects to cancer. The discovery appears February 11, 2016, in the Journal of Physiology published online in advance of print.

Lead author Dany Spencer Adams, Ph.D., a research associate professor in the Department of Biology in Tufts’ School of Arts and Sciences, and colleagues at Tufts, the Massachusetts Institute of Technology and RMIT University used an embryonic frog model to demonstrate for the first time that faulty bioelectric signaling is responsible for the craniofacial defects that characterize ATS — a broad forehead and nose, wide-set eyes, low-set ears and a small jaw and chin.

Patients with ATS have a mutation in the gene that codes for the potassium ion channel Kir2.1, a crucial piece of cell machinery that maintains cells’ electrical charge by regulating the flow of positively charged potassium ions in and out of cells. If Kir2.1 malfunctions, it affects how facial features develop in the embryo, among other things.

Cardiac arrhythmias and muscle disorders also associated with ATS had previously been linked to electrophysiology, but the craniofacial deformities had been unexplained.

The new findings, Adams says, "are not just the first-ever model of why one rare mutation causes craniofacial anomalies, they actually may apply to the very much more common fetal alcohol syndrome."

While only about 100 people in the world have ATS, it's estimated that more than 7 million suffer from fetal alcohol syndrome, she says. Research by other scientists has found that alcohol binds to the Kir2.1 ion channel, leading to speculation that abnormal ion channel function may cause the distinctive facial features associated with fetal alcohol syndrome, just as it does in ATS.

In their study, Tufts scientists used light to control ion channel activity—the first use of the emerging field of optogenetics to alter embryonic development and probe a disease state by manipulating bioelectric signaling. Using light to precisely manipulate and monitor cells that had been genetically modified to express light-sensitive ion channels, the researchers showed that altering the natural bioelectric patterns within the outer cell layer of the frog embryos during early development caused abnormalities in the skull and face, while changes later in development did not.

The work bolsters earlier findings by Tufts researchers that bioelectric signaling in many cell types, not only nerves, plays a major role in how cells create and repair complex anatomical structures, says Michael Levin, Ph.D., director of the Tufts Center for Regenerative and Developmental Biology and a co-author of the latest study.

With that knowledge, he says, it may be possible to alter bioelectric signaling to correct the effects of genetic mutations or other developmental defects. "That's the big picture here," says Levin, who is also the Vannevar Bush Professor in the Department of Biology at Tufts.

The Journal of Physiology study suggests that the ability to exert some control over ion channels like Kir2.1 could dramatically alter what's going on in the cells of a developing embryo. Treatments to prevent the formation of facial abnormalities, such as those associated with ATS and other conditions caused by malfunctioning ion channels, could occur without having to alter the genetic sequence, Adams says, or even necessarily knowing which gene is affected.

"We already have drugs that are approved for human use that alter ion flux," says Adams. "Because we have targeted drugs, we already have ways to go in and prevent the problem."

The Adams and Levin labs are two of just a handful in the world studying bioelectricity in cells outside the nervous system. In earlier research the two teams demonstrated that bioelectric signaling is involved in regulating gene expression and anatomical structure in a range of organs by dictating the fate of cells and tissues during development, regeneration and cancer suppression.

"These bioelectric properties are just as important as biochemical signals," Adams says, "and in some ways are much easier targets for therapy than the genetics."

Tufts University, located on three Massachusetts campuses in Boston, Medford/Somerville and Grafton, and in Talloires, France, is recognized among the premier research universities in the United States. Tufts enjoy a global reputation for academic excellence and for the preparation of students as leaders in a wide range of professions. A growing number of innovative teaching and research initiatives span all Tufts campuses, and collaboration among the faculty and students in the undergraduate, graduate and professional programs across the university's schools is widely encouraged.

The content of this release is solely the responsibility of the authors and does not necessarily represent the official views of the funders.