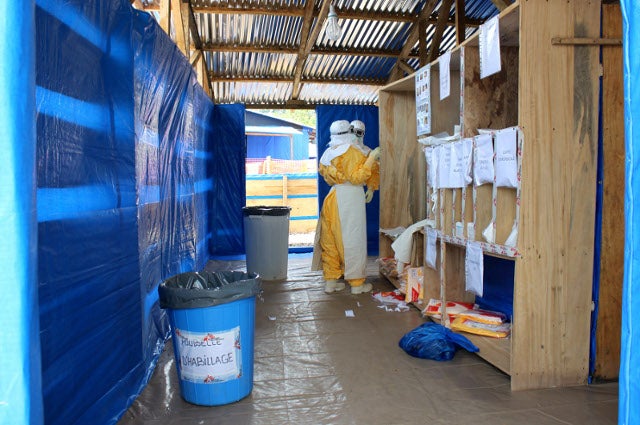 The Ebola pandemic presents a pretty good argument that preparing for outbreaks of infectious disease is more effective and less expensive than waiting until something happens.

During the Ebola epidemic in West Africa in 2014-15, more than 11,000 people died, according to the World Health Organization (WHO). The pandemic cost the regional economy $2.2 billion, and the international community spent another $1.6 billion on response efforts, reports the World Bank. Fast forward to the present: now, WHO experts are predicting that the current Zika virus outbreak, which is suspected of being linked to birth defects in the Americas, could pose a bigger global health threat than Ebola.

“Each new outbreak has taught us something about how to work together across disciplines to attack the problem,” says Felicia Nutter, V93, an assistant professor of infectious disease and global health at Cummings School. “But we haven’t always been great about proactively planning, so we benefit from those lessons.”

In response to the Ebola crisis, the National Academy of Medicine convened a commission to figure out how to prepare for the next global disease threat. That commission’s report, released on Jan. 13, concluded that an annual $4.5 billion investment to improve public health in low- and middle-income countries would save an estimated $60 billion per year in economic losses from a pandemic, not to mention countless lives.

Along those same lines, Tufts is a lead player in an international partnership of universities that is training future health professionals to respond to, and ultimately prevent, infectious diseases that animals transmit to people and vice versa.

Researchers from Cummings School and the University of Minnesota are heading up the One Health Workforce, a five-year, $50 million initiative to ensure that universities in East and Central Africa and South East Asia are offering the courses and training that will enable health-care workers to address pandemics from myriad perspectives. The notion behind One Health is that the well-being of people, domestic and wild animals, and ecosystems are interdependent.

For the One Health project, Nutter and other Tufts faculty members serve as technical advisors who help “train the trainers” in more than a dozen countries that are hot spots for emerging infectious disease.

“We’re focused on education to prepare the workforce,” says Nutter, who is partnering with university educators in Indonesia, Malaysia, Thailand and Vietnam. “The project helps bring universities together with their government ministries—the future employers of the people graduating with degrees in human, animal and public health—to understand which areas universities need to address,” she says.

A significant component of a One Health approach is understanding how cultural norms may contribute to the spread of a disease, such as families engaging in pre-burial washing of a loved one when the body is still contaminated, as was the case with Ebola, says Janetrix Hellen Amuguni, V11, an assistant professor of infectious disease and global health who is a Cummings School technical advisor for the One Health Workforce project in eight East and Central African nations. Economists may be needed to convince governments to invest in protective garb for health-care workers, among other issues, she says.

The mental health of families affected by a pandemic is also important, says Amuguni. “With HIV, you see a 12-year-old taking care of five brothers. With Ebola, we have orphans as well as survivors whose homes were destroyed because their villages thought that you must burn everything to kill the virus.”

Every country has different needs. For example, Kenya has a well-established veterinary school that can host emergency-response simulation events, while the veterinary school in the Democratic Republic of Congo needs basics, such as computers and laboratories.

“Some schools’ needs may include knowledge on grant writing,” Amuguni says, “so we will identify someone from our institution who teaches grant writing, or has been successful at preparing and submitting grants, and send them abroad to support that institution.”

While Amuguni and others say it will likely be decades before the results of their work will fully bear fruit, the recent Ebola epidemic in West Africa shows they’re on the right track. During an earlier Ebola outbreak in Uganda, “it took them a very long time to respond,” Amuguni says.

In the aftermath, the U.S. Agency for International Development, which funds the One Heath Workforce program, worked with government officials to figure out a plan for the next time, putting together an emergency response team, outlining which agency would take the lead, who else would be pulled in, where the financial resources and protective gear would come from, where people could be quarantined, and who would speak to the press.

As a result of the advance planning, the next Ebola outbreak in Uganda was contained in 26 days. And when the disease emerged in West Africa, Uganda and other East African countries sent more than 60 people trained in outbreak response to Liberia and Sierra Leone to help organize health-care workers and others in the community, Amuguni reports. “We are proud to have worked with them over the past few years to build capacity and skills in outbreak response and to put those multidisciplinary teams of people in place.”