Glimpses of a World Shattered by the Holocaust 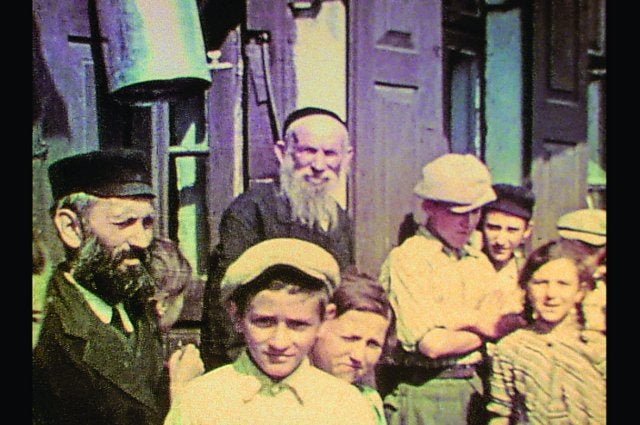 Glenn Kurtz, A84, found the reel of 16mm film buried in his parents’ closet in 2009. It was a home movie his grandparents had shot of their 1938 European vacation—snippets of a ferry ride in Holland, walking in the Grand Palace in Belgium, feeding pigeons in a Parisian park. There were also a few minutes of footage from a Polish town called Nasielsk, with children on the street grinning into the camera.

It didn’t take Kurtz long to realize he was looking at the last glimpse of a thriving Jewish community. The year after the film was shot, Germany would invade Poland. He later learned that of the nearly 3,000 Jews who lived in the town at the time, fewer than 100 survived the war. 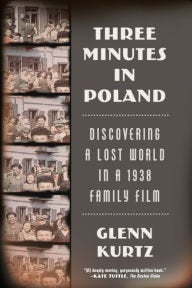 Kurtz’s attempt to learn something about the faces in the film would eventually become Three Minutes in Poland: Discovering a Lost World in a 1938 Family Film. The work, which was named a best book of 2014 by The New Yorker, NPR and the Boston Globe, is about the lives in Nasielsk that were torn apart by the Holocaust, as well as about Kurtz’s personal journey to gather the remaining memories of the town. It recently was issued in paperback.

The journey started with a roadblock. Kurtz tracked down a woman who had been a young child in Nasielsk at the time, but her memory was so clouded by time and trauma that he gave up hope of learning anything about the town. Then, two-and-a-half years after he unearthed the film, he received an email out of the blue from a woman in Detroit. She had seen the film, since archived by the U.S. Holocaust Memorial Museum and made available online, and recognized an apple-cheeked boy in the crowd as her grandfather.

Maurice Chandler was alive and well. Eighty-seven and living in Florida, he was blessed with vivid recall of Nasielsk. He told Kurtz about the clothing store his family owned; the Glodek family, who owned the bicycle shop; Fishl Perelmuter, who painted the biblical murals on the synagogue walls; and Chamnusen Cwajghaft, who carved headstones. Kurtz would later call Chandler “the film’s Rosetta Stone,” the bridge between the past and the present that would make all the other connections possible.

Kurtz spent four years rebuilding a memory of the town, traveling to Canada, England, Poland and Israel and across the United States to interview a handful of other Nasielsk survivors and scour archives and libraries. The story that took shape was by necessity through the eyes of people who were children when the war began.

“It has a tremendous impact on what is remembered,” Kurtz says in a phone interview from his home in New York City. The stories are about school, or the days the circus came to town, or such mischief as stealing buttons off coats at the back of the synagogue, or eating a piece of ham from the Polish butcher—the ultimate rebellion in a kosher household.

“As kids they lack an overview of the situation,” Kurtz says. “Were their parents worried about fascism, or the relationship between Poland and Germany? They don’t really know. In a sense, it makes it a more intimate memory.” Their stories sometimes come alive with details: the taste of the fermented bread-and-fruit drink kvass, the liver-and-onions smell that accompanied the town ascetic, the odor of acid and freshly welded metal from the tinsmith’s shop.

But the interviews also show inconsistencies and trailings-off. Kurtz is gentle with an interviewee who starts to blend reality with the plot of Sophie’s Choice. The author is relying on “the texture of an 80- or 90-year-old’s memories,” and resists the urge to fill in the gaps.

“I realized that I couldn’t tell what it was like,” he said. “The life there was destroyed, and if you pretend that we can leap over that loss and just be there, I think we are avoiding the truth of what happened. But if we focus on how it’s remembered, then the loss becomes more palpable, because you can see in a sense the fragility of the very little bit that has remained.”

There, too, are the memories that still bring nightmares: of hundreds of Nasielsk Jews being locked in the synagogue and made to scrape Perelmuter’s murals off with their fingernails; of relatives being forced to strip and bathe in the icy river before being loaded onto suffocating train cars to the ghettos; of running through a gauntlet of bat- and gun-wielding soldiers to reach Soviet-occupied Poland; of years spent posing as a Catholic and knowing that the slightest slip into Yiddish would mean death.

In his research, Kurtz had hoped to find out more about his own family, including the grandfather who made the film. (David Kurtz, an American businessman, was born in Nasielsk but raised in New York.) Yet it was the people in the background of the film that Kurtz ended up learning the most about. “In the end, they feel like my family,” he says, recounting how several generations of Nasielsk descendants have connected over this small piece of celluloid. “It was very unexpected. I had no sense whatsoever, when I began, of the depth of the emotional connection that would be created.”

At one point in the book, he likens himself to a switchboard operator, “connecting long-distance messages from one end of the Nasielsk Diaspora to another.” The significance hits home when he shows some Nasielsk photos he has collected to a 90-year-old survivor in Israel who is being treated for cancer. The sickly man seems suddenly to become an excited boy. “Mayn futer!” he says, looking at the face of his father for the first time since 1939.

Nothing remains of Jewish Nasielsk but fragments. “But the fragments,” Kurtz says, “did not have to remain isolated.”

A version of this story first appeared in the Summer 2015 issue of Tufts Magazine.