In Search of a Bad Bug

Almost 40 years ago, Tufts’ Te-Wen Chang played a key role in determining the cause of a life-threatening disease 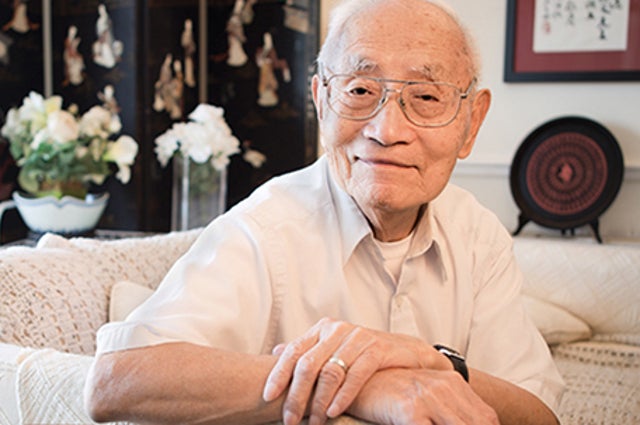 It all began with a medical puzzle. A severe diarrheal disease called pseudomembranous colitis, and later known as Clindamycin-induced colitis, had been observed by doctors since the 1890s. It spread dramatically with the rise of antibiotic use in the 20th century. In the mid-1970s, infectious disease specialist Sherwood Gorbach, M62, J84P, organized his research team at Tufts—including Te-Wen Chang, M84P, and John Bartlett—to look into what was causing the colitis.

“When humans take antibiotics, they develop diarrhea, and some develop a more severe form—colitis,” Chang says. “No one knew why. When an antibiotic is given to a [test] hamster, that hamster dies. Why did that happen? These were the questions.”

Suspecting a virus might be at work, Chang, who trained as a virologist, began to examine tissue cultures inoculated with the stools of affected hamsters. “I was working day and night,” he relates. “The hamster stool specimens caused damage to the tissue culture cells. I kept asking myself, What could be doing the damage? A virus was ruled out because the agent could not be propagated to fresh tissue cultures. If it’s a bacterial toxin, what kind of bacteria is it?”

To determine this, Chang applied gas-gangrene antitoxin to the tissue samples. The only form of bacteria the antitoxin neutralized was clostridium—“so I knew right away that a clostridium makes the toxin,” Chang explains.

Bartlett recalls Chang’s high excitement as the hunt narrowed. “There are five antitoxins in gas gangrene, so we had to sort out which one was the bad bug,” says Bartlett. Further intense work in the lab told them that C. difficile (so-named at the time of its discovery in 1935 because it proved hard to isolate and study in the lab) was the culprit.

“Before, we didn’t know what caused the disease in humans,” Chang points out. “Now we knew.” Bartlett, who left Tufts in 1980 to head up the infectious diseases division at Johns Hopkins for the next 26 years, calls the discovery “a seminal event in the history of C. difficile.” The Tufts lab’s achievement was noted in the article “Antibiotic-Associated Pseudomembranous Colitis Due to Toxin-Producing Clostridia,” published in the New England Journal of Medicine in March 1978 by Bartlett et al.

Because it is resistant to most antibiotics, C. difficile is a tough form of bacteria to stamp out. When a patient takes antibiotics, regular bacteria are reduced in the intestine, but C. difficile thrives. It benefits from the absence of the bacterial forces that normally act to suppress it, while simultaneously tapping a greater store of colonic nutrients. The bacteria’s impact is enormous. An article in the Journal this past April labeled C. difficile “a major enteric pathogen with worldwide distribution,” citing some 453,000 infections and 29,000 deaths in the U.S. in a single year.

The infection spreads easily along the fecal-oral route, and hospitals rank among the most hazardous sites.

Back in 1978, once news of the Gorbach lab’s discovery got around, Tufts’ Boston campus began receiving human stool samples from doctors seeking expert diagnosis. “That paper became very popular,” Chang recounts with a hearty laugh. “I got specimens from every state in the U.S.” For the next year or two, in fact, Tufts played a singular role. “That cytotoxin assay of Te-Wen became the only test for C. difficile available anywhere in the world,” Bartlett notes.

Chang, 95, retired from Tufts in 1992 and plainly misses the excitement of those days. Bartlett, recently retired from Johns Hopkins and now living in Mississippi, remembers the camaraderie of life in the Tufts lab fondly as well. “Chang was a brilliant scientist, but quiet about it,” he says. “He was also lots of fun to have in the lab. I never had that kind of chemistry before, and I never had it again.”

It was an altogether special time. As Gorbach remarks, “This was one of the biggest discoveries ever at Tufts. After all, how often do you discover the cause of a life-threatening disease?”

This article first appeared in the Fall 2015 issue of Tufts Medicine magazine.