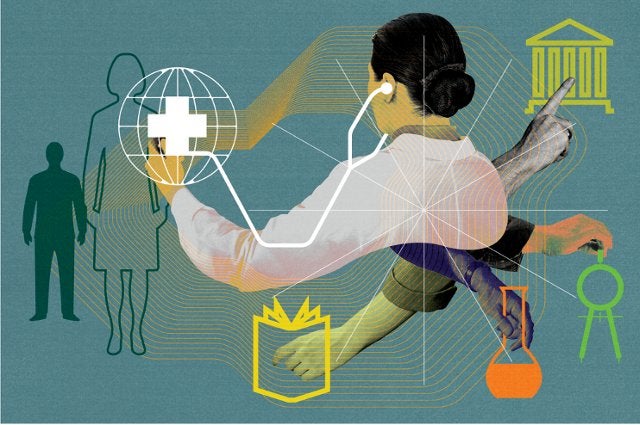 The Tufts Institute for Innovation (TII), a university-wide research enterprise launched a year ago with the ambitious goal of improving the human condition, has enhanced its initial vision and research agenda. It anticipates hiring four faculty over the next 18 months to be housed in new laboratories on the health sciences campus in Boston, and then increasing the number of faculty fivefold over the following decade.

The institute is envisioned as “a new model for academic research in the 21st century—one that will jump-start collaborative, solution-based science across the university and focus on delivering outcomes, not merely outputs,” says University Professor David Walt, the institute’s founding director.

TII seeks to redefine some of the traditional benchmarks of academic progress, Walt says. “While academic institutions often define success in terms of faculty publications or student achievements, these outputs don’t always produce a societal impact,” he says.

By recruiting multiple cross-disciplinary program teams that will have the capability to surmount the political, cultural, regulatory, infrastructure and economic barriers that can prevent even the most successful scientific breakthroughs from having significance beyond the laboratory, TII will pursue its goal of delivering global impact, Walt says. Such outcomes could take many forms—the commercialization of a particular discovery, changes in public policy, or educational initiatives.

While the initial scope of TII was to create multidisciplinary program teams to work on projects related to a single theme—diseases caused by bacteria, viruses, fungi and other microbes—the institute has expanded its focus to include discovery that will improve human health more broadly.

Tufts has considerable expertise in human and animal models of disease, international business and policy, engineering, the environment, the humanities and humanitarian issues, and geopolitical contexts and challenges, and as a result, the university “is uniquely positioned to produce discoveries that will improve the human condition,” says Tufts President Anthony P. Monaco.

The institute currently operates out of a laboratory in the Biomedical Research and Public Health Building on the Boston campus. Additional TII research space is being constructed at 75 Kneeland St. in Boston. Walt, an accomplished researcher and entrepreneur whose lab has developed optical microarray technology for disease detection and cancer diagnostics, plans to move his own research group from the Medford/Somerville campus to the new lab.

“We are rethinking how research is conducted and space is utilized,” says Lauren Linton, TII’s deputy director. “With an open floor plan, the new lab will be flexible and built for collaboration across disciplines. It will support the concept of TII being a highly interactive research collective that will grow and change constantly.”

TII plans to expand to 25 full-time core faculty who will hold academic appointments in various Tufts schools and departments. The hires ideally will be a mix of current Tufts faculty as well as external candidates; Walt will fill one of these openings immediately. “Wonderful space for the first five faculty will open at 75 Kneeland St. in the fall of 2016, but as the institute evolves and grows, additional space of comparable quality will be needed,” Walt says.

Right now, TII is seeking to hire four senior faculty who will apply as teams, allowing us “to create research area ‘franchises,’ ” says Linton. Candidates will be expected to lay out a five- to 10-year vision for how they will deliver a solution to their chosen human health research problem. “TII’s goal is to fund these programs rather than funding the people per se,” Walt says.

“This new research methodology pairs the best practices of academia with those of industry,” Linton notes. It combines “academia’s cutting-edge research, intellectual freedom and scholarly assets with the clear-eyed, market-driven, solution-based understanding of a problem that you see in the commercial sector.”

In addition to hiring its own faculty, TII continues to offer seed funding to multidisciplinary research teams from across the university. Faculty who receive these grants—36 of them so far—become affiliates of the institute.

Since its launch in August 2014, TII has awarded two rounds of seed grants to seven projects designed to improve the diagnosis and treatment of tuberculosis, Lyme disease and hepatitis, among other illnesses. One project team, led by Jimmy Crott, a scientist at the Jean Mayer USDA Human Nutrition Research Center on Aging, for example, is investigating whether a bacterium found in the human gut can decrease the risk of developing colorectal cancer. The third round of seed-funded projects will get underway in July.

The hallmarks of TII seed projects and the institute-based research franchises are the same, Linton says. The work must involve multidisciplinary teams and propose a solution to a human health problem and a plan for implementing it.

Developing remedies for human health challenges requires a range of expertise, says Bhaskar Chakravorti, the senior associate dean of international business and finance at the Fletcher School and founding executive director of the school’s Institute for Business in the Global Context. “Frankly, the greatest unmet needs in the state of the human condition are in the so-called global south”—the 157 nations of Africa, Central and Latin America, and most of Asia, says Chakravorti, a member of TII’s executive committee.

“Many of the sociopolitical and economic institutions we take for granted in the global north are missing in the global south,” he says. “Ironically, our ability to deliver the impact from breakthroughs in the biophysical and medical sciences requires overcoming these institutional and contextual barriers—the very stuff of the social sciences.”

TII can lead the way “in showing how innovating in the social sciences unlocks the value of discoveries, especially when you consider the human condition as the ultimate yardstick of success,” Chakravorti says.