When he’s not busy with tech transfer for Tufts, Colm Lawler is walking, camera in hand, on the lookout for wildlife 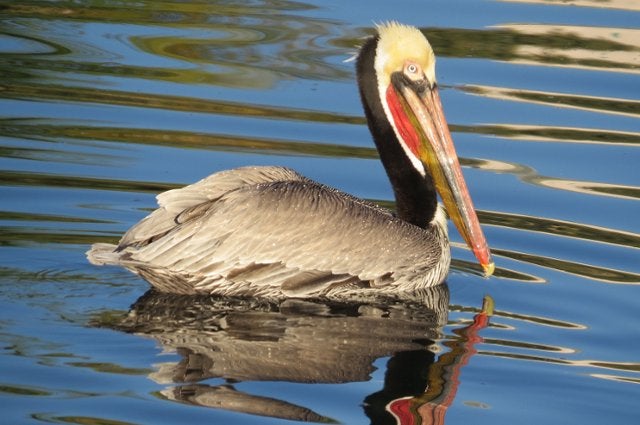 Jan. 1, 2009, will forever be fixed in Colm Lawler’s memory. It was the first time he deliberately took his digital camera on a walk. His mission was simple—just look.

“I asked myself, Can I see anything? I don’t care what it is—as long as I see something wild, I’ll be happy. It could be a dull crow—it didn’t matter.”

Turns out that walking the banks of the Mystic River in Medford, Massachusetts, gave him plenty of opportunity to frame and shoot, including a male hooded merganser trying to attract the attention of a much plainer female duck. A few weeks later, while traipsing around Marco Island in Florida, he became enamored with the egrets and herons. “From then on, I was hooked,” he says. 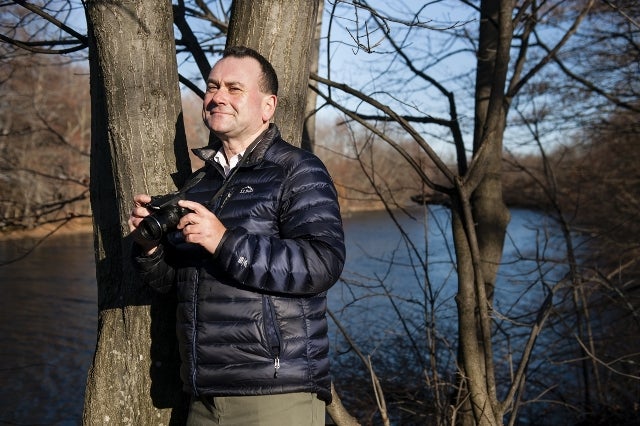 “I want whatever animal I photograph to be the star in the picture,” Colm Lawler says. “I find I almost lose myself in the magic of the moment when I stop to take a photograph.” Photo: Alonso Nichols
Lawler’s fascination with wildlife has led to an impressive photo archive—tens of thousands of images and counting. Since he started in earnest seven years ago, he has taken photographs in 15 states, from Maine to California.

His day job takes him to an office on the Boston campus, where he is an associate director at Technology Transfer and Industry Collaboration, managing intellectual property and technology transfer matters related to research at Tufts University.

Most weekends, though, you’ll find him walking with a Canon SX60 Powershot slung around his neck in search of animals going about their daily business. 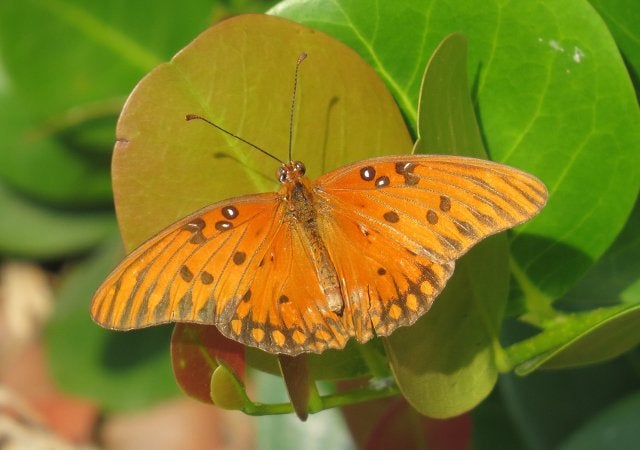 Gulf frittilary, Marco Island, Florida, April 2014. “The beauty of these creatures never ceases to amaze me. I view it as a privilege to see them in good light when all their colors are in full display,” says Colm Lawler. Photo: Colm Lawler
“Beauty is everywhere,” Lawler says. “On any given day anything can happen. You just have to keep your ears and eyes open.”

What draws him to nature is the awe of it all. He speaks with deep reverence for each and every animal, saying his goal is “to do justice” to a creature’s inherent detail. His up-close photos capture subtle and exquisite designs, from the interplay of colorful feathers on a hummingbird to the network of veins on a dragonfly’s gossamer wings.

“I want whatever animal I photograph to be the star in the picture,” Lawler says. “It means I have to slow down. I find I almost lose myself in the magic of the moment when I stop to take a photograph.” 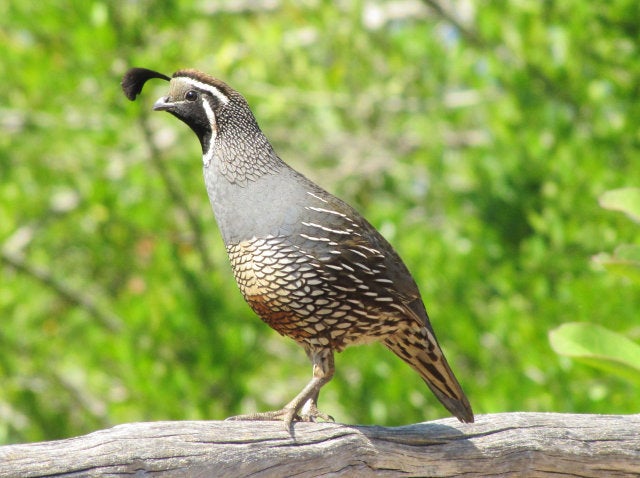 California quail, on the campus of the University of Santa Cruz, July 2010. “I often visit college campuses, as their green spaces can provide the appropriate natural habitat for me to explore, and that was the case here,” says Colm Lawler. Photo: Colm Lawler
Over the years, he’s developed many regular walks: the Boston Common and Public Garden, Winthrop Beach, Deer Island, Tufts’ Medford/Somerville campus, the Mystic River, Jamaica Pond, the Charles River, the Minuteman Bikeway, South Boston, Castle Island and Revere Beach. He heads out a few times a month in all four seasons, covering anywhere from five to 10 miles; winter’s brutal cold is no deterrent.

Though he combines vacations with photography—including visits to Wyoming, California, the Everglades, Belize and the Czech Republic—it is the Massachusetts habitats for birds, butterflies, dragonflies, reptiles and amphibians that have sustained his hobby. 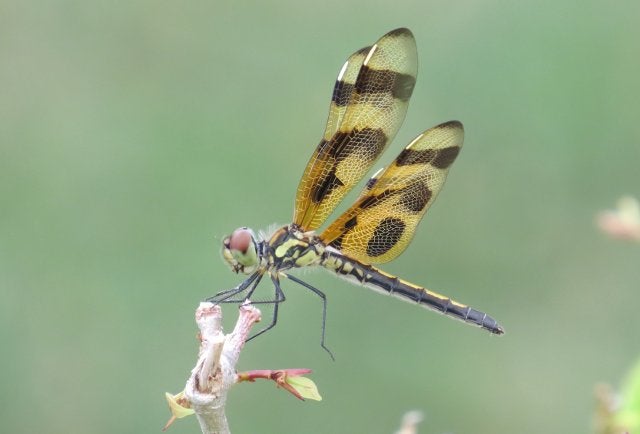 Halloween pennant dragonfly, Marco Island, Florida, April 2014. “I consider this my best dragonfly picture in the seven-plus years I’ve had this hobby. The combination of form, design, color and natural engineering comes together beautifully in this little creature,” says Colm Lawler. Photo: Colm Lawler
Lawler grew up in Cork, Ireland, where his parents encouraged an interest in nature. He has fond memories of him and his father tossing bread and fruit to the ducks. He earned his undergraduate degree in botany and then a Ph.D. in nematology (the study of roundworms) from University College Dublin.

“I had expected a career as a researcher, but after doing that for about two years, I decided I’d be happier in a career outside the lab,” he says. “When doing my thesis, I analyzed the roundworm using different microscopes. That opened up an invisible, amazing world, and maybe that opened my mind to looking closely at things. Little did I know that 15 years later I’d be mesmerized by photography—looking now at the natural  world.” 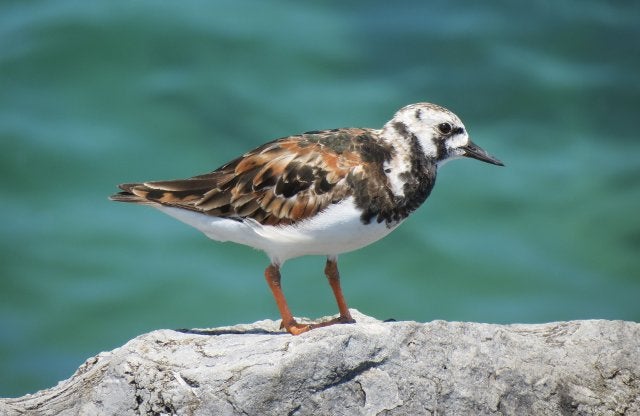 Ruddy turnstone, Long Beach Island, New Jersey, June 2012. “The contrast of the bird’s harlequin colors against the green backdrop of the sea really caught my attention,” says Colm Lawler. Photo: Colm Lawler
Lawler came to the United States in 1998, after he met his future wife at a conference in Texas. In 2005 he bought his first camera, a point-and-shoot Canon. But by 2008, a holiday in Banff, in Alberta, Canada, confirmed that he needed to upgrade.

“I couldn’t get the image I wanted, and I started to get frustrated,” he says. “I settled at that time on a Canon SX10 Powershot. It has a zoom lens, but it’s still small and lightweight enough to be mobile, and I can always count on its fast autofocus.”

The Joy of Seeing 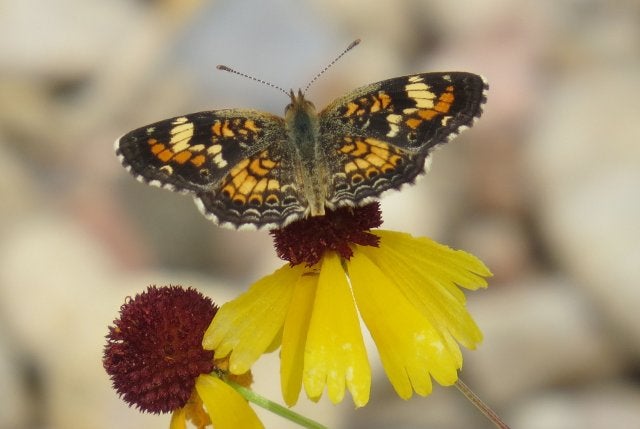 Phaon crescent, Austin, Texas. “I saw it on flowers growing in a small garden patch as I walked down a street. The encounter brought home to me that even in the midst of urban spaces, there is the chance to see nature in action, if you just keep your eyes open,” says Colm Lawler. Photo: Colm Lawler
Lawler can usually count on the delight of coming upon the perfect—yet unpredictable—moment, like he did on a recent walk through the Fens in Boston. He spotted a downy woodpecker as it alighted on a branch. “He had this lovely little red patch on his head, and behind him was a small piece of blue water,” he says. He got the shot.

Photography invariably deepens his connection to the rhythms of the natural world. “I like the fact that wildlife is free—these are creatures who are doing their own thing,” he says. “They have no agenda other than just to be and to survive.” 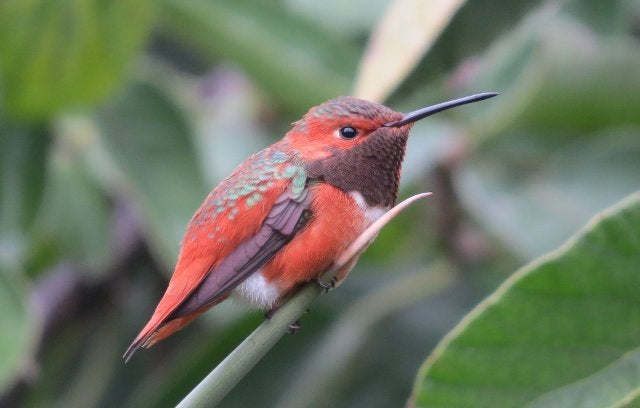 Rufus hummingbird, at the gardens of the Huntington Library, Pasadena, California, November 2013. “This little guy was drying off under a branch after a rain shower, allowing me the opportunity to view this normally very active bird in a more sedate manner,” says Colm Lawler. Photo: Colm Lawler
To illustrate his point, he shares a photo taken in Austin of a male wood duck preening for a female. “Part of the reason that male birds are so fascinating to me is that they’re brightly colored—they are supposed to be seen by the females,” he says. “It reminds me I’m a witness to what’s been going on for millions of years.” 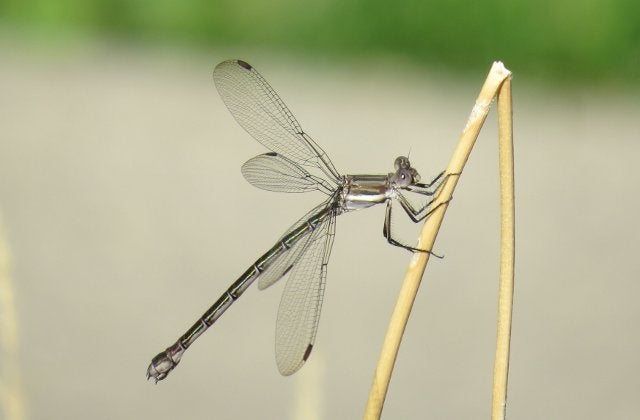 Great spreadwing damselfly, Salt Lake City, Utah, August 2014. “Normally damselflies are much smaller than these; seeing one this big was quite a surprise,” says Colm Lawler. Photo: Colm Lawler
Still, while he might take 100 to 500 photos an outing, he’s not officially done until he’s methodically edited those down to the very best—just 1 or 2 percent make the cut.

“I really want to apply a high standard,” he says. “I realize that other people probably don’t share my passion, so I have to show them my best work.”

He remains resolved to keep his hobby focused on fun. He doesn’t post his work online, for example, and he’s not interested in entering competitions.

“I’m happy to share my work with people informally. If they say, ‘That’s a pretty picture,’ that’s incredibly enriching and rewarding,” Lawler says. “But the reason I walk with my camera is really all about the pure aesthetics of the animal. I’m interested in getting as much joy out of what I see as possible.”