Cutting back on snoozing can pack on the pounds. The question is, why? 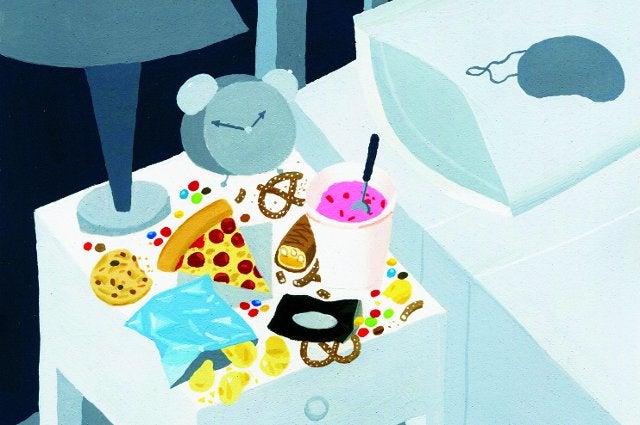 You probably know this ritual: the kids are in bed, the television is on, and you reach for the chips or the ice cream. Before long, it’s 1 a.m., and you are dreading your alarm clock in the morning as you guiltily pick up the empty bag or pint container from the floor. Substitute your own late-night binge, but the result is the same: You’ve stayed up late and overeaten again.

When it comes to studying the causes of weight gain and obesity, nutrition researchers rightly focus on the interaction between diet and exercise. They’re just starting to understand the influence of an activity that humans engage in for a third of their lives—sleep.

A growing body of research over the past few years has found that lack of sleep is closely associated with weight gain. “At this point, the relationship between sleep and obesity has been well-established,” says Hassan Dashti, N15, who was lead author of research papers on the topic. The question is, why?

“It could be related to increased intake or lack of physical activity,” says Dashti, who received his Ph.D. from Tufts in 2015 and is a dietetic intern at Brigham and Women’s Hospital. “And if we find that it is related to intake, then we need to find out what types of food people are eating more of, and whether they are engaging in specific dietary behaviors.”

Other researchers have looked at hormonal, psychological and sociocultural factors, and Dashti himself has concentrated on genetic factors that may mediate the relationship.

All of this research points to the inescapable conclusion that while getting more sleep may not be a magic bullet for losing weight, it’s an integral and oft-overlooked part of the puzzle in helping us to maintain a healthy weight.

“People who go to bed late or sleep less tend to eat more, especially after 8 p.m., contributing to an increase in weight,” says Friedman School professor José Ordovás, director of the Nutrition and Genomics Laboratory at the Jean Mayer USDA Human Nutrition Research Center on Aging at Tufts and Dashti’s doctoral thesis advisor.

In a review article in the American Journal of Clinical Nutrition, Dashti, Ordovás and other researchers analyzed nine studies that tracked health and lifestyle factors over time and involved nearly 15,000 people of European descent. After adjusting for age, sex and location, they found a small but significant association between the length of time people slept and their body mass index (BMI). Each extra hour of sleep translated to a slight decrease in BMI. Men, however, benefited from the extra sleep twice as much as women.

When Dashti and his colleagues looked more closely at different age and gender groups, they found compelling evidence that all those late-night snacks may be taking their toll. “Individuals who sleep less tend to eat more foods higher in saturated fat,” says Dashti. “And we find additional associations with women—those who sleep less also tend to eat more foods higher in carbs and lower in polyunsaturated fats, the healthier fats.”

Those results are consistent with previous analyses of sleep and diet. Michael Grandner, a psychologist and director of the Sleep and Health Research Program at the University of Arizona School of Medicine, looked at data from the National Health and Nutrition Examination Study (NHANES) in 2013, and found that short sleepers of five to six hours a night consume an average of 50 extra calories compared to normal sleepers of seven to eight hours—an increase of 2.3 percent.

What is more important, short sleepers had less variety in their diets, ate more unhealthy foods and drank more alcohol.

The results seem consistent even over the very long term. For a 2011 study published in the New England Journal of Medicine, Dariush Mozaffarian, the dean of the Friedman School, looked at weight gain over 20 years in more than 120,000 men and women in three separate studies.

He found that those who slept six hours or less per night had greater weight gain than those who slept seven to eight hours. “These long-term observations support the results of short-term experiments that reduced sleep changes our hunger and cravings for specific foods, especially less healthy, more highly processed junk and snack foods,” he says.

Indeed, some small-scale lab studies, for which people were restricted to less than six hours of sleep for one or more nights, have supported the association between lack of sleep and higher food intake. Analyzing five of these studies, Columbia University obesity researcher Marie-Pierre St. Onge found that in four of them, calorie intake increased substantially as sleep declined—an average of 300 to 550 calories a day—mostly from late-night snacking.

In part, those increases can be explained as compensation for the increased physical activity of being awake longer—but not completely. “If you are awake, you are more likely to burn more calories. But the energy intake is so much greater than what it should be,” says Kristen Knutson, a biomedical anthropologist at the University of Chicago. “People are overeating way more than they need to make up for the extra energy expenditure of being awake.”

Other laboratory interventions have pointed toward metabolic reasons for overeating. Several early studies found a decrease in the amount of leptin (known as the “satiety hormone” for its role in inhibiting hunger) and an increase in ghrelin (known as the “hunger hormone” for its propensity to stir appetite) in subjects when the amount of time they were allowed to sleep was limited.

More recent studies have had difficulty replicating those findings; however, some researchers believe that complex chemical changes may be driving the propensity to overeat when we don’t sleep, at least in part.

Knutson points to more recent studies that have found an increase in cortisol, the “stress hormone,” in short sleepers. That increase is particularly prevalent in the evening—the same time studies have shown short sleepers overeat. “You could imagine from an evolutionary perspective, if lack of sleep is interpreted as a stressor, it may be stimulating a flight-or-fight response, for which you would need more energy,” says Knutson. “People may be choosing food that is more energy-dense as a result.”

Other research has pointed less toward a biologically driven explanation for increased eating by short sleepers in favor of one that is more psychologically triggered. Jean-Philippe Chaput of the Children’s Hospital of Eastern Ontario Research Institute, who wrote an editorial in the American Journal of Clinical Nutrition about Dashti’s paper, has found that weight gain is highest among short sleepers with personality traits that make them less inhibited about eating, implying they are not eating just out of need.

“After eating good meals, you don’t feel hungry, but there is always room for dessert,” says Chaput. “When you sleep less, you have more time to eat. It may be that people are eating out of pleasure to the brain rather than any kind of hormonal explanation.” The drive to eat for pleasure may be compounded by poor cognitive ability because of sleep loss, UC Berkeley sleep psychologist Matt Walker found in a 2013 study.

Hooking research subjects up to an fMRI (functional magnetic resonance imaging) machine, Walker’s lab found that after a sleepless night, participants showed impaired functioning in the brain’s frontal lobe, which controls decision-making, while activity increased in the amygdala, associated with the brain’s reward system. When presented with a range of food options, these participants were more likely to choose burgers, pizza and doughnuts over fruits and vegetables.

“We’ve known for a long time that sleep loss impairs brain function,” says Grandner. “When you are well-rested, you are very good at sorting information. But when people are sleep deprived, the stuff you are supposed to ignore gets more distracting.”

Dashti’s own recent research has suggested that short sleep doesn’t affect everyone equally—in fact, genetic variations may explain the propensity to put on extra calories. In his recent paper in the American Journal of Clinical Nutrition, Dashti looked at variants in the so-called CLOCK gene (the acronym stands for Circadian Locomotor Output Cycles Kaput)—an important regulator of our sleep-wake cycle.

“It’s one of the core genes that make up your biological clock,” says Dashti. “If that gene is not functioning properly, your biological clock may not be working.” Dashti found, however, that among some people with variants of the CLOCK gene, sleeping longer led to eating more healthy fats and proteins, decreasing the genetic risk of becoming obese.

The research augments studies by Ordovás and others that have shown how patterns of genetic variants can lead to increased consumption in other ways, including a genetic propensity to eat larger portions or to eat more when bored. Adding sleep into the mix, Dashti’s research suggests one way to combat genetic patterns.

In another paper, published in the journal Diabetes Care, Dashti found that getting sufficient sleep could decrease the risk of diabetes among those with other gene variants related to the biological clock. “If you have this genetic predisposition to elevated blood sugar, then following normal and recommended sleep duration of seven to nine hours a night may help reduce this genetic predisposition,” he says.

These gene variants are not rare—by some estimates they affect 40 to 50 percent of the population. Changing sleep patterns may be one way to help control cardiometabolic diseases like diabetes and high blood pressure.

“We are really focused on finding ways for people with specific genetic profiles to follow specific lifestyles to reduce their genetic predisposition to cardiometabolic diseases,” says Dashti.

Of course, sleep is just one piece of the puzzle in the prevalence of such diseases, but it may be a way to make widespread changes in public health. It is well-established that people from disadvantaged socioeconomic backgrounds suffer disproportionately from such diseases—and also that they sleep less, due in part to working multiple jobs or shift work and other time pressures.

“People aren’t sleeping five hours a night because they hate sleep; rather they feel like they don’t have time for sleep,” says Grandner. “The question is, could sleep be driving the wedge even further by maintaining some of these health problems? Is sleep just tagging along for the ride, or is it making things worse?”

Addressing sleep problems may help improve health overall and spur other healthy changes. “It is much easier to intervene on sleep than on smoking or alcohol or diet or exercise,” points out Grander. “We could potentially do some real good here.”

Sleeping more may not help people lose weight, per se, but studies have shown that it can help improve the effectiveness of existing diets. “When everyone is put on the same weight-loss diet, the short sleepers tend to lose less,” says Dashti. “A lot of health coaches emphasize the importance of diet and exercise, but they neglect sleep. It’s the missing third component.”

While much progress has already been made in teasing out the connection between weight gain and sleep, the research is still in the beginning stages. “It’s a very exciting moment in research, but we need to be careful not to oversell the results,” warns Ordovás.

Even so, asking questions about sleep should be part of any nutritionist’s strategy for helping patients eat better and improve their overall health, say these researchers. Neglecting the importance of the sleep we get is a missed opportunity for clinicians to effect real change.

A version of this article first appeared in the Winter 2016 issue of Tufts Nutrition magazine.