To treat muscle-related aching, one dentist reaches for the needles

When George Maloney, a clinical professor at the Tufts School of Dental Medicine, sees a patient in pain, he first determines whether the ache emanates from the nerves or the muscles. For nerve-based pain, he often prescribes medications. For muscle pain, he reaches for his needles.

Maloney, who is affiliated with the Tufts Craniofacial Pain Center (see “A Holistic Approach to Treating Pain”), is a longtime advocate of using acupuncture over painkillers to treat muscle pain. In addition to his D.M.D., he has a master’s degree in acupuncture from the New England School of Acupuncture. 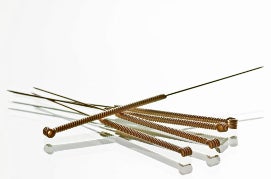 Acupuncture works, George Maloney says, because chronic pain puts the face and jaw muscles into an altered state. Acupuncture can gradually get the muscles to relax. Illustration: Ingimages
Painkillers, Maloney says, provide only generalized relief and can lead to drug dependence and addiction. “Opioid pain relievers can be effective for a short-term treatment of a day or two,” he says. By contrast, acupuncture can provide lasting relief from the pain.

Maloney begins acupuncture treatment by stabilizing the points of contact, or occlusion, between the teeth with a mouthguard or oral splint. “If you create a stable occlusion, which can reduce muscle activity in the jaw, then you will find it much more effective when you treat the muscles more directly with needling,” he says. He treats muscle pain with traditional acupuncture needles or electro-acupuncture, which sends a low, pulsating electric current to the muscles.

In traditional Chinese medicine, inserting acupuncture needles into specific locations balances the flow of qi, or vital energy, throughout the body. More modern explanations typically point to acupuncture’s ability to stimulate peptides and other biochemical signals that cause physiological effects, such as increasing blood flow, reducing inflammation and easing muscle tension.

Maloney first got involved with the alternative medicine technique after repeatedly surveying patients on what reduced their pain, and finding that a high percentage of them mentioned acupuncture. He took a distance-learning course through UCLA Medical School in 1998, following it up with the program at New England School of Acupuncture in 2002. Acupuncture works, he says, because chronic pain puts the face and jaw muscles into an altered state. Acupuncture can gradually get the muscles to relax.

While acupuncture is not widely used by dental pain practitioners, several clinical studies have shown it to be effective in treating craniofacial pain, especially when combined with stable occlusion. As far back as 1997, the National Institutes of Health issued a consensus statement affirming evidence that acupuncture is effective in relieving postoperative dental pain.

Maloney wants to add to the body of evidence. He is beginning a review of studies about the effectiveness of acupuncture in treating temporomandibular joint disorder and craniofacial pain. “I think that this review and other controlled clinical trials can produce the kind of evidence that may lead to wide-scale acceptance,” he says.