A Holistic Approach to Treating Pain

At the Tufts Craniofacial Pain Center, dentists, physicians, psychologists and others work together to ease their patients’ suffering 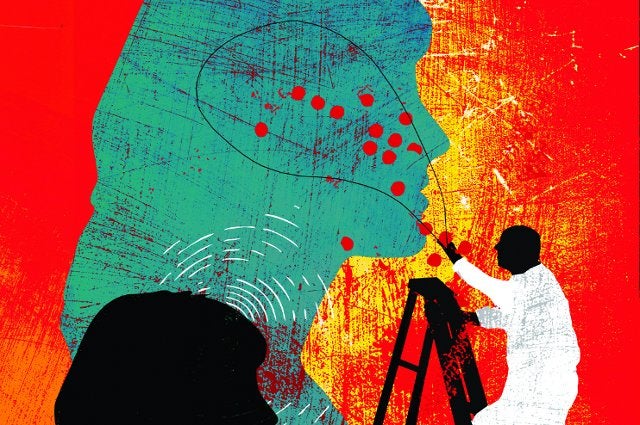 Like a lot of the patients who come to the Tufts Craniofacial Pain Center, the 30-something Ph.D. student was at her wits' end. Since high school, she’d suffered from three or four migraine headaches a year. Then she woke up one morning with a sharp pain in her cheek that never went away. She began having one or two migraine headaches a week and feared her condition might ruin her career in academia.

By the time she showed up at Tufts, the woman was anxious and depressed, says Egilius L.H. Spierings, a clinical professor in the Department of Diagnostic Sciences at the School of Dental Medicine.

“Generally, people have come through a good number of physicians and dentists before they ultimately end up here at the clinic,” says Spierings, a neurologist who consults with the dentists on complex cases. “She had seen a lot of physicians and gotten a lot of different opinions. She was on a number of medications. That’s the kind of thing that would make anyone irritable.”

She underwent a complete work-up. Over the course of several months, the dentists ruled out any tooth-related problems, like abscesses, grinding and clenching of the teeth, or jaw misalignments. The clinic psychologists helped determine which came first, the patient’s intractable pain or the depression and anxiety.

“Everybody here got involved with this patient,” Spierings says. That approach—a team of specialists from many disciplines working together to unravel the puzzle of seemingly intractable pain—is the guiding philosophy at the Craniofacial Pain Center.

The Tufts Craniofacial Pain Center, which was among the first pain programs to use this holistic approach, treats patients suffering from headaches, sleep problems and facial pain. The vast majority of patients are diagnosed with conditions like cervical or musculoskeletal problems or sleep apnea, according to Noshir Mehta, DG73, DI77, who served as the pain center’s director from its founding in 1985 until 2012.

Approximately 1,500 new patients a year come through the doors of the Craniofacial Pain Center at One Kneeland Street, says Shuchi Dhadwal, DG10, DI14, the center’s interim director. The center’s team includes dentists, physicians and psychologists, and draws on the expertise of physical and occupational therapists. A current physiology fellow who spent six years as a Buddhist monk works with patients on mindfulness meditation.

Chronic pain affects 100 million American adults and costs the country roughly $600 billion annually, according to the U.S. Institute of Medicine. Orofacial pain—including headaches—may account for as much as 40 percent of that price tag, according to a 2014 study published in the Journal of the American Dental Association (JADA).

“Face pain is an elusive area,” Spierings says. “Very few people or institutions really have a good understanding of it.” And if the pain continues without relief, it takes on a psychological dimension, too—and can affect other people in a patient’s life. Dhadwal says she became interested in pursuing pain as a specialty—she received advanced training at Tufts in craniomandibular disorders—because a close family member suffered from chronic pain. “It can be really stressful, not just for the patient but for the family members as well.”

What bedevils both health-care providers and patients is pain’s invisibility—you can’t see it on an X-ray or measure it with a blood test. That, along with its extraordinarily subjective nature, makes it a frustrating adversary.

“If you cut your arm, and you show it to someone, they will see the cut and they will believe you,” Mehta says. “If you have pain, it’s up to you to describe it. And it’s up to me to believe you.” The standard practice of asking patients to rate their pain on a scale of 0 to 10, for example, leaves a lot of leeway. “If you have a pain of 3, it might be the same as someone else’s 7,” Mehta says.

“That’s the problem with chronic pain—you have to believe the person who is giving you information, and how much you believe in your patient will lead you to treat the patient differently,” Mehta says. “The good doctors in pain management will look at everything, but need to come into the conversation believing their patients are telling the truth.”

Spierings, a physician, agrees. He holds a Ph.D. in pharmacology, but he is primarily a neurologist who specializes in migraine headaches. In the early 1980s, he did a fellowship in headache medicine under John Graham, a pioneer in the field, at Boston’s Faulkner Hospital. “If you asked me what is the single most important thing that he taught me, I would say to listen to patients and to take as valuable what they tell you,” says Spierings. “I think most of what I know about headache and face pain I learned from patients.”

A New Way of Teaching About Pain

In addition to treating patients, the center’s other mission is education. Predoctoral students rotate through the clinic, and there is a postgraduate program that leads to either a certificate or a master’s degree in orofacial pain.

Because pain management transcends traditional boundaries in patient care, work in this field, both research and clinical, is among the most interprofessional of endeavors at the School of Dental Medicine—a noteworthy model as collaborative health-care practice moves toward becoming the norm for the 21st century. “It’s not just that I’m a dentist. We look at our patients from a global standpoint,” says Mehta.

“In this environment, not only do the students get exposure to treating pain, but [also] how to collaborate with specialists outside their own field,” Dhadwal says. And for patients, the advantage is that all the providers can be brought together when the patient is there.

For more than 15 years, the pain center has been sharing its expertise by hosting weekly rounds at the dental school to address specific cases or topics, such as managing pain in patients who have other physical or mental illnesses or using new technologies to measure and study pain.

Academics and health-care providers can call into the sessions from anywhere, either to share their own knowledge or to seek opinions about their patients. Two experts from Saudi Arabia called in this fall, says Ronald Kulich, a professor of oral pathology in the dental school’s Department of Diagnostic Sciences, who hosts the sessions.

At a recent call-in, Chao Lu, DG10, an assistant professor in the Department of Diagnostic Sciences at the dental school, presented two cases that, at first glance, looked like temporomandibular joint disorder. Closer examination, however, revealed other possible causes.

In one case, a woman claimed her jaw misalignment and bruised left cheek resulted from a bad fall. But an MRI showed an injury more consistent with being hit or punched, information that could help the team offer intervention for domestic violence. In the other, a young girl had jaw pain typical of nighttime tooth grinding. But when one of the pain center’s physicians noticed she had a slight rash, he ordered a blood test. The diagnosis turned out to be Lyme disease, caught early thanks to the interdisciplinary team at Tufts.

The pain center’s collaborative approach also helped identify the source of the doctoral student’s sudden, stabbing cheek pain. Spierings ordered a CT scan to see whether an ear, nose and throat problem could account for her discomfort. The scan revealed a tiny bone spur, “like a splinter in your nose,” he says. “Once you have that, it causes inflammation, and you’re stuck with it.” A simple surgery took care of the problem, a solution that no single health-care provider had realized.

Contact Jacqueline Mitchell at jacqueline.mitchell@tufts.edu and Helene Ragovin at helene.ragovin@tufts.edu.