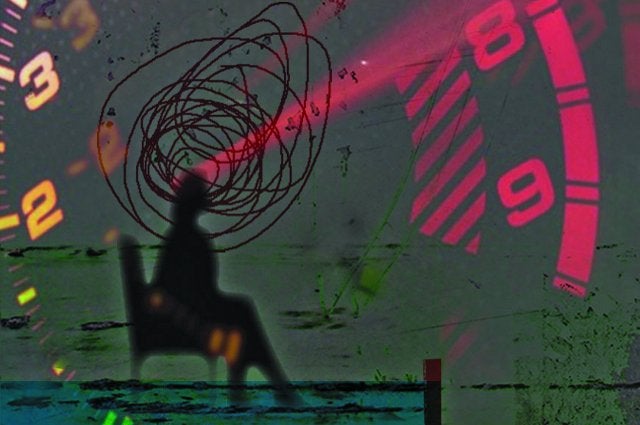 One of the things Egilius L.H. Spierings has learned over nearly 40 years of practice remains controversial in headache medicine, but it seems intuitive to anyone who has found that a shoulder massage can ease a headache.

“People’s mouths drop open when I tell them that in the headache world, there is no attention being paid to the muscles,” says Spierings, a neurologist on the staff at the Tufts Craniofacial Pain Center (see “A Holistic Approach to Treating Pain”).

About 5 percent of people suffer from daily headaches, according to a study Spierings published in the journal Headache in 2013. Among those, about half have migraine, the often-severe headache that can be accompanied by light sensitivity or seeing lights, increased sensitivity to sounds, or smelling odors. The rest suffer from tension-type headache, characterized by milder, diffuse pain in the head and sometimes in the face.

While migraine may get more attention from headache experts, both types of headaches have perplexing origins. Tension headache is thought to be caused by a lack of sleep, stress, hunger, thirst, eye strain or strain on the muscles of the shoulders, head and neck, usually due to bad posture. (Think sitting at your desk all day.)

Migraine is a more baffling condition. What is known is that it occurs when blood vessels in the head dilate. But Spierings is certain that just as with tension headache, stress on the muscles in the neck, jaw and shoulders may also play a role, especially in people who have frequent or long-lasting migraine headaches. The more pain the person endures, the more likely she—and women suffer from migraine at about twice the rate that men do—is to store tension in those muscles.

It’s the musculature, he points out, that dentists treat when they fit patients with an appliance to ease jaw pain caused by nighttime clenching and grinding. Headaches often accompany these habits, and sometimes they are the first, if not only, daytime symptom.

Botox, a long-acting muscle relaxant, is now used to treat chronic migraines, too. (Spierings, a pharmacologist, participated as an investigator in one of the clinical trials that led to FDA approval of Botox as a headache remedy.) “The pain is ultimately caused by the blood vessels widening,” he says. “But what drives the frequency, I think, is a muscular mechanism.” He says his findings that Botox alleviates migraine only among chronic sufferers support that conclusion.

In the quest for a more universal treatment for migraine, Spierings is among the researchers looking at targeting a chemical in the body called calcitonin gene-related peptide (CGRP) that is known to dilate blood vessels. Scientists have been able to block CGRP’s effects with a new class of drugs called anti-CGRP antibodies. The early results are promising. “It seems like a tremendous step forward,” he says.