Diplomat in the Wings 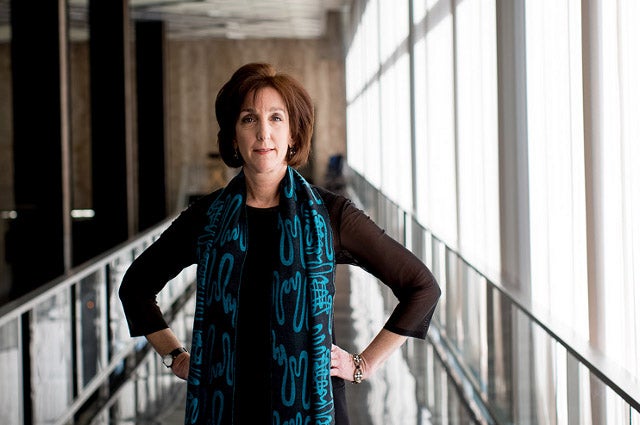 It’s been nearly a year since President Barack Obama nominated Roberta Jacobson, F86, A19P, to be U.S. ambassador to Mexico. She’s still waiting for approval from the Senate. The delay is widely interpreted as punishment from Republican lawmakers who disapproved of the landmark negotiations, led by Jacobson, that re-established U.S. diplomatic relations with Cuba last year.

At 55, Jacobson has been Assistant Secretary of State for Western Hemisphere Affairs since 2012, and before that she was the State Department’s point person for Mexico, Canada and NAFTA. If approved, she will be the first woman to serve as ambassador to Mexico.

Jacobson recently talked with Tufts Now while visiting Tufts to see her older son, who is a freshman at the university.

Tufts Now: What drew you to work in U.S.-Latin American relations?

Roberta Jacobson: Around my sophomore year at Brown, I had decided, to my mother’s delight, that I was going to do political science instead of dance and theater, because I liked eating too much to do dance and starve myself the rest of my life. I had studied Spanish in high school and I was in college from ’78 to ’82, the period during which Latin American countries began to go from military dictatorship to democracy.

So as a laboratory for political science, it was a really interesting time in Latin America. I also became captivated by the culture and the rhythms of the music and the dance, so it all came together for me, which was odd for a nice Jewish girl from New Jersey.

Why was it important to reconnect the U.S. and Cuba?

It was clear that American public opinion had changed. Trade opportunities were being missed, and people were wondering why we were continuing this anachronistic policy. The Cuba issue was the pebble in the shoe in our relationship with Latin America and the Caribbean. It was undermining our relationship with countries around the hemisphere.

Meanwhile, I’d been working to get Alan Gross out of prison. He was a U.S. Agency for International Development subcontractor who’d been arrested by the Cubans for bringing in a satellite phone and trying to help the Jewish community connect to the Internet. Alan was not doing well emotionally. We were holding three Cuban spies in prison, and there had been an effort over two years to see if we could work out an exchange.

We knew we were going to take a lot of political heat for any kind of swap, so we decided we’d be much better off doing something very big. The thing that came out of the White House—and honestly I had never contemplated it—was normalization of diplomatic relations. And that was because the president thought, OK, I want to do something that really changes the relationship and signals to Latin America and Europe that we’re changing the relationship. I can’t lift the embargo, because the embargo was codified into law. But normalizing diplomatic relations is a big signal.  The polling since then shows very, very strong support for the new policy of engagement, even among Cuban Americans.

Although you took some heat for it.

From some members of Congress, yes. But I can’t buy my own drinks in Miami. People want to buy me drinks. People want to kiss me. I can hardly walk through the Miami airport without people coming up and thanking me.

Marco Rubio, the Republican senator from Florida and former presidential candidate, seems particularly unhappy with you. He’s twice held up your confirmation to diplomatic posts, and last fall he placed a temporary hold on your nomination as ambassador to Mexico. What did you do to get Marco Rubio so upset with you?

Mexico is the United States’ third-largest trading partner, and you’ve said that your first priority as ambassador will be “to advance U.S. economic competitiveness and deepening the economic ties that are so central to opportunities, good jobs and growth.” How would you help the administration do that?

There are two main things ambassadors can do. First, there is a bully pulpit. You’re the U.S. ambassador, and people pay attention to what you say, so you can use that for highlighting issues that you think are particularly important. The other thing is simply how you run your team. Mission Mexico, meaning the embassy and the nine consulates, is about 2,800 people. So I would want to make sure that they have the priorities right, and that I’ve been clear about what I think we can all do in these priority areas.

So many of the problems that Mexico faces and that affect our relationship with Mexico, including the economic relationship, boil down to rule of law and having a better-functioning justice system and transparent government institutions. They still have a long way to go in Mexico. People tend to think of rule of law as being about access to justice for the poor or about a reduction in human rights abuses.

It’s just as much about the sanctity of contracts, and about a level playing field for foreign investors and open and competitive bidding processes. The current judicial system in Mexico enables cronyism, corruption and bribery. The greater the rule of law, including in the economic and commercial sphere, the better we are going to be able to advance our own competitiveness with Mexico and their own achievement of being a modern, sophisticated economic state.

You helped develop the Merida Initiative, a 2008 security cooperation agreement among the U.S., Mexico and the countries of Central America to combat drug trafficking, organized crime and money laundering. How’s that going?

Still, there are over 400,000 state and local police, and from what we know, some of them are among the worst abusers. Sometimes they’re traffickers themselves. So we have a long way to go. Another problem is that the cartels have fragmented, so instead of three or five cartels like when I first started working on Mexico, there are roughly 15. They fight each other, which is where a lot of the violence comes from.

The Obama administration has put a lot more money into demand reduction and prevention. That’s critical. Most important, we have to go after drug financing the way we’ve gone after terrorist financing since 9/11. And we are not devoting the same amount of resources to that.

As ambassador, how can you address the continuing flow of people heading north from Central America hoping to get to the United States?

I think the larger crisis in Syria and Europe is masking the fact that there is still a crisis here. And it could get worse. We’re looking at drought conditions in Central America, especially accelerated by El Niño, that could push 2 million more people into food insecurity.

This mass migration will keep happening over and over and over again, with untold tragedies in the meantime, if we don’t attack the underlying conditions that drive folks to migrate, such as violence, corruption and lack of economic opportunities.

And we can’t do that without significantly more resources. Congress has allocated up to $750 million to try to get at the underlying causes of the migration. And that money has the potential to make a huge difference. We know what works. The Agency for International Development did programs in 50 communities and looked at another 50 communities where they didn’t do programs, and the crime rates in the program communities all went down significantly.

We can now expand upon those programs that we know work.  Sustained investment in the region is the only way we start making a difference. And we can’t work only on security.  We have to work on economic development, and we have to work on governance.

You spend a lot of time mentoring younger professionals. What’s your main message?

With work-life balance, I tell people that you can have it all. You just can’t have it all at once. There are different times in your life when you emphasize different things, and there’s nothing wrong with that. There were times when my kids did have to come first and they needed me, and there were other times when they didn’t understand why I couldn’t do the field trips and the baking brownies and all the rest of it. But when they stood on the stage with Hillary Clinton, they thought that was pretty damn cool and probably worth it.