With a win over previously unbeaten Scranton, Tufts advances in the NCAAs 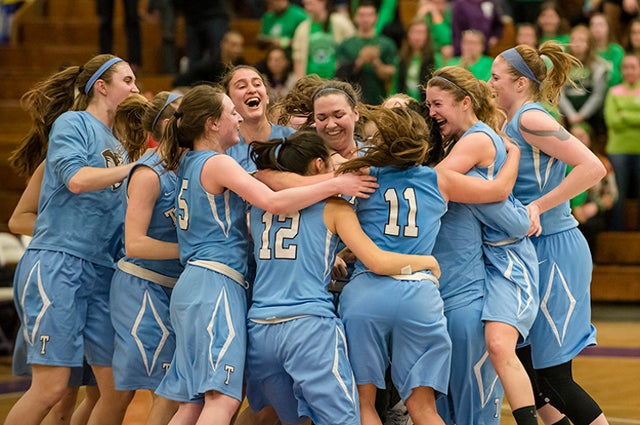 While it seemed like the entire Tufts campus was crammed into Cousens Gym rooting for the men’s basketball team in the NCAA sectional rounds over the weekend, the Jumbo women’s team was away with family and friends in Scranton, Pennsylvania, doing what they’ve become known for in the first two weekends of the NCAA tournament: taking care of business.

Head coach Carla Berube’s seventh-ranked Jumbos advanced to their third consecutive NCAA Championship semifinal by defeating No. 9 Albright (62-49) and then host and previously unbeaten Scranton (57-48) in the third and quarterfinal rounds on March 11 and 12.

The Jumbos (27-3) now head to Capital University in Columbus, Ohio, where they will play Wartburg College (23-7) in the national semifinals on Saturday, March 19, at 5 p.m. Top-ranked defending national champion Thomas More (31-0) and Amherst (30-1) will meet in the other NCAA semifinal, also in Ohio, starting at 7:30 p.m.

In the Albright “Sweet 16” game, the Jumbos led by one at the half before opening up a seven-point lead in the third quarter and adding to it in the fourth. Junior Michela North dominated down low with 17 points and 19 rebounds. Senior Maura Folliard scored 11 points off the bench.

That advanced Tufts to the “Elite 8,” where the Jumbos overcame an undefeated Scranton team that was playing at home in front of a huge crowd. The Jumbos got out to a 15-5 lead after one quarter and led 30-17 at the half. Scranton came back to tie the score at 45, but the Jumbos showed their grit by pulling away for a nine-point win. Sophomore Melissa Baptista was immense, scoring 23 points, including five-for-five shooting from three-point territory.

“We knew that starting the game on a strong note was going to be imperative, and we did that,” said Berube in an interview on the team bus heading home on Sunday morning. “We came out with a lot of energy and with fire and got ourselves a nice lead in the first half. After they came back and tied it up, we had to dig deep and make some plays defensively. Our defense fuels our offense, and we made the shots and the plays we needed to down the stretch and stayed composed when the crowd was going crazy.”

As a result, the Jumbos are one of the final four teams still playing in the 2015-16 season. They reached the national semifinals in the last two years behind the veteran leadership of Hannah Foley, Hayley Kanner and Kelsey Morehead. When those players graduated, a third straight trip to the “Final Four” seemed uncertain at best.

“This team has definitely surprised me,” Berube said. “I knew we were capable of this with the pieces that we had, but I think it was going to take us a little time to figure out roles. I couldn’t be more proud of how they’ve stepped up. We had a couple tough losses first semester. The players got together, rallied together, and when we started to play well in the beginning of the spring semester, they didn’t think anything was going to stand in their way.”

“I think it’s exciting for the two teams to play at the Division I final four,” Berube said. “It’s going to be a really amazing experience. But we’ve got our work cut out for us with a really strong Wartburg team, and we’ve already started our preparation. We’re just really excited to be playing again at the Final Four.”

Unranked Wartburg has been a Cinderella team this season. The Knights, out of the Iowa Intercollegiate Athletic Conference, earned an at-large berth into the NCAAs for their first appearance in the national tournament since 2001-02. After a 65-49 win over Wisconsin-Lutheran in the opening round, they advanced past No. 11 Wisconsin Oshkosh (66-56), No. 8 St. Thomas (70-66), and No. 6 Texas-Tyler (80-74). This will be the Knights’ first trip to the Final Four.

“I think any time that we’re playing at our level of defense, we’re in the game,” Berube said. “We have to make plays. We need people to step up on that stage. We haven’t been successful quite yet in the last two years, but now, hopefully, the third time’s the charm.”

Paul Sweeney, the sports information director at Tufts, can be reached at paul.sweeney@tufts.edu.