Actor, producer and comedian known for his Simpsons’ roles is among six honorary degree recipients 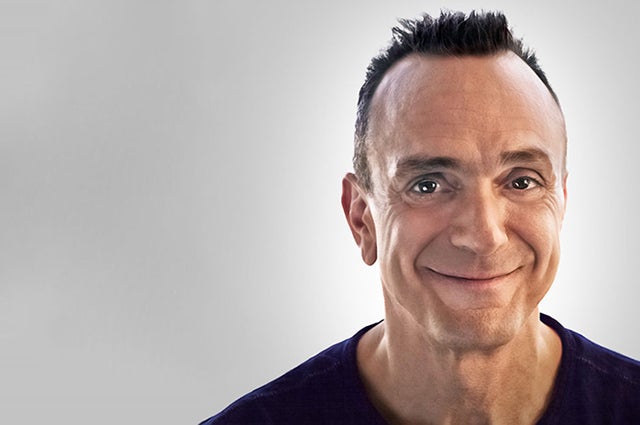 Award-winning film, television and stage actor, producer and comedian Hank Azaria, A87, will deliver Tufts University’s commencement address on May 22.

He currently appears on Showtime’s Ray Donovan and will star in The Public’s off-Broadway play Dry Powder, directed by Thomas Kail. In addition, he recently completed production on the independent film Oppenheimer Strategies and HBO’s The Wizard of Lies.

Azaria has starred in many films, including The Birdcage, Lovelace, America’s Sweethearts, Pretty Woman, Grosse Pointe Blank, Quiz Show and Shattered Glass. He has also had recurring roles on the television series Mad About You and Friends, and played the title character in the drama Huff. He has appeared on stage in The Farnsworth Invention, Sexual Perversity in Chicago and the popular musical Spamalot, for which he received a Tony nomination.

Though known for his comedic acting, Azaria has taken on dramatic roles—in, for example, the TV films Tuesdays with Morrie and Uprising. He also worked behind the camera when he co-wrote, produced, directed and starred in the short film Nobody’s Perfect, which debuted in 2004 at the Sundance Film Festival and won Best Short at the 2004 U.S. Comedy Arts Festival.

He completed his Tufts degree, with a major in drama, in 1987, but not without a bit of drama of his own. A self-described “very good student” at Tufts, Azaria says that his grades dropped after he fell in love with acting. “I lost my concentration for academics,” he says. “My heart was into pursuing acting and theater.”

Azaria marched with his graduating class in 1985 but was two credits shy of a diploma. A year later, after moving to Los Angeles, he went back to school at his mother’s urging, earning the remaining credits needed for his Tufts degree at UCLA. In 1999, Azaria was given Tufts’ Light on the Hill Award, the highest honor that Tufts students bestow on alumni.

“Hank Azaria is truly a one-of-a-kind talent whose creativity has given pleasure to millions and demonstrated the power of the dramatic arts in our lives. We are proud to call him a Jumbo,” says Tufts University President Anthony P. Monaco. “We are delighted that he will come back to campus to address our graduates, their families and the university.”

At commencement, which begins at 9 a.m. on the academic quad of Tufts’ Medford/Somerville campus, Azaria will receive an honorary doctor of humane letters degree. Five other distinguished men and women will also receive honorary degrees:

Martin Granoff, entrepreneur, business leader and Tufts parent and trustee emeritus. His generosity made possible Tufts’ Perry and Martin Granoff Music Center, and he was instrumental in establishing the Granoff Family Hillel Center at Tufts. He is the founder and chairman of Val D’Or Inc/Cannon County Knitting Mills, chairman of Koret of California, and founder and chairman of National Textiles. He is a trustee of the National Hillel Foundation and a former trustee of Brown University, from which he received an honorary degree. Granoff will receive an honorary doctor of public service degree.

Sonia Manzano, actress and writer best known for playing Maria on Sesame Street for more than 40 years. Manzano won 15 Emmys as a writer for Sesame Street and was twice nominated for an Emmy as Outstanding Performer in a Children’s Series. In addition to writing for the stage and television, she has written children’s picture books and young adult novels. Manzano will receive an honorary doctor of fine arts degree.

Margot Stern Strom, president emerita and senior scholar of Facing History and Ourselves. Her work as an international leader in education for justice and the preservation of democracy has enabled millions of students and their teachers to study the Holocaust and investigate the root causes of racism, anti-Semitism and violence. Strom will receive an honorary doctor of humane letters degree.

In addition, Arianna Huffington, journalist, author, commentator and co-founder of the Huffington Post, will deliver the Class Day speech at the Fletcher School on May 21.