Hat Trick in the 800 Meters 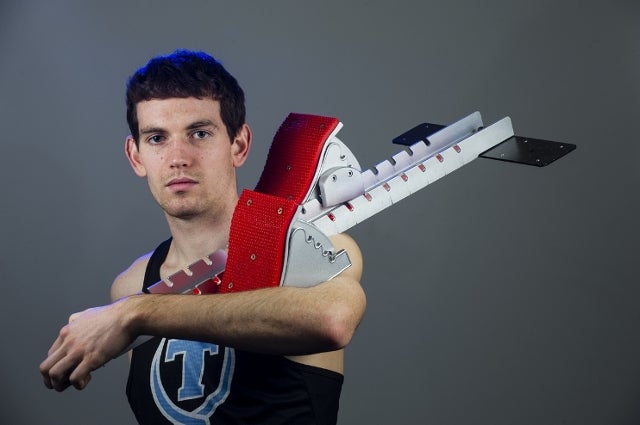 Academics led Mitchell Black to Tufts, but he also wanted to play a sport. He tried out for the men’s soccer team in the fall of 2012. He showed tremendous athleticism, particularly during the team fitness test, but didn’t make the squad.

“He was incredibly fit,” says Tufts men’s soccer coach Josh Shapiro. But he was seeking players with a high level of technical skills in a quest to build a squad that eventually would win the 2014 NCAA championship.

For Black, E16, it was the best outcome. He had been a three-sport athlete, in soccer, basketball and track, at Brunswick High School in Maine. With soccer at Tufts ruled out, he turned to track.

During his freshman season, the team competed at the Bowdoin College Invitational in his hometown, and Black won the 800 meters with a time of 1:57.16. The following week, at Boston University, he dropped four seconds off his 800, finishing in 1:53.19.

“I absolutely surprised myself,” he says. “I remember crossing the line at BU and just exploding and yelling. That’s what every single weekend was like when I first started. It was so new, and I didn’t know what I could do.”

As a sophomore, Black was already one of the nation’s best in the 800. He was third at the NCAA indoor meet, and finished as the national runner-up outdoors. He was primed to win a national title in the event. As a junior last year, he won two. Black was the NCAA indoor 800 champion with a time of 1:51.94 and then went on to win the NCAA outdoor title in 1:52.57.

His dominance in the 800 continued this year. On March 12 in Grinnell, Iowa, Black added a third NCAA 800 meters title to his resume, winning the 2016 indoor event with considerable ease. His time of 1:52.48 was 1.19 seconds faster than that of runner-up Deko Ricketts of Washington University (1:53.661).

“It’s never easy,” Black says. “The field was full of top qualifiers and former All-Americans. However, I had the strength in the last lap to kick the way I did. I always tell myself that if I can just get to 300 to go I’ll be all right, because I trust my fitness, trust my coaching, and trust my will to win on the homestretch.”

A nine-time All-American, Black is focused on his final collegiate season outdoors—and a personal goal is to hit the U.S. Olympic trials standard in the 800 meters (1:47.5). That would allow him to compete at historic Hayward Field in Eugene, Oregon, in early July. But a team achievement is more important.

“First and foremost, I want us to win the NESCAC championship four years in a row,” he says. “I want to leave Tufts and be able to say that I was part of the class that didn’t lose at track in the NESCAC.”

Black showed his team-first attitude after winning his third national championship. Veer Bhalla, A16, was also in the race, but was tripped accidentally and finished last. After crossing the finish line, Black says, he was heartbroken when he looked back and saw Bhalla had fallen.

Williams and his coaching staff will look to enter Black in fast races this spring, which will give him opportunities to run against the best in the country and increase his chances of hitting the Olympic trials mark.

Regardless of what happens on the track this spring, Black’s future will take him to far greater heights—he wants to be a rocket scientist. He is a double major in mechanical engineering and astrophysics and has applied to graduate programs in aerospace, aeronautics and astronautics, and space engineering, as well as for positions at NASA.

“I’m at a Division III school, so athletics are not my main priority,” Black says. “I came to Tufts so I could focus on my academics.” But the chance to compete at the Olympic trials, well, that would be remarkable. “If I were to have a huge breakthrough this year, and qualify for the Olympic trials, I think it would be such a waste not to pursue that.”

Sports information director Paul Sweeney can be reached at paul.sweeney@tufts.edu.