Headed to the National Championship 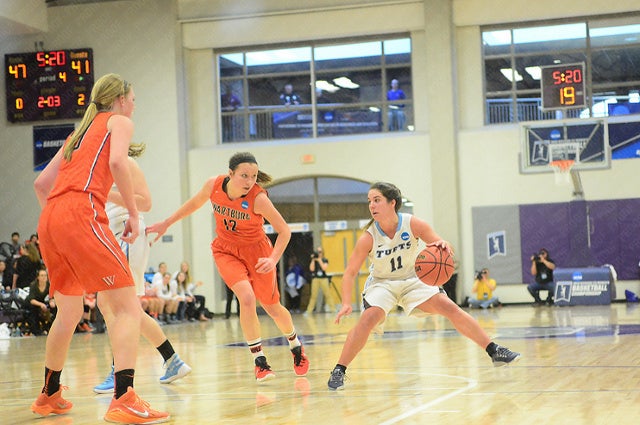 For the first time in its 44-year history, the Tufts women’s basketball team will play in the NCAA Division III championship game, facing defending national champion Thomas More College on April 4 in Indianapolis.

The Jumbos (28-3) advanced to the finals after leading start-to-finish in a 63-50 victory over Wartburg College in the semifinals on March 19 in Columbus, Ohio. It was the team’s third straight appearance in the Final Four. In other semifinal action in Ohio last weekend, Thomas More defeated Amherst 74-65.

“I’m thrilled for my team to be going to the championship game, to experience what it’s like,” says head coach Carla Berube, who played on the 1995 NCAA Division I championship University of Connecticut team. “We’re going to enjoy the ride these next couple of weeks. We’re ecstatic.”

Tufts held Wartburg scoreless in the first quarter, building a 14-0 lead. “I told the team that was the best quarter of defense I’ve ever been around,” Berube says. But the Jumbos had to hold off a second-half comeback by the Knights. Wartburg closed to within four points (47-43) before Tufts went on a 10-2 run to seal the victory. The win was the 300th of Berube’s career.

Sophomore guard Lauren Dillon played all 40 minutes and led the Jumbos with 19 points, shooting five for seven on field goals, including three for four on three-pointers. She nailed a three after Wartburg had narrowed the Tufts lead to four points, giving the Jumbos a 50-43 advantage with 4:31 on the fourth-quarter clock. 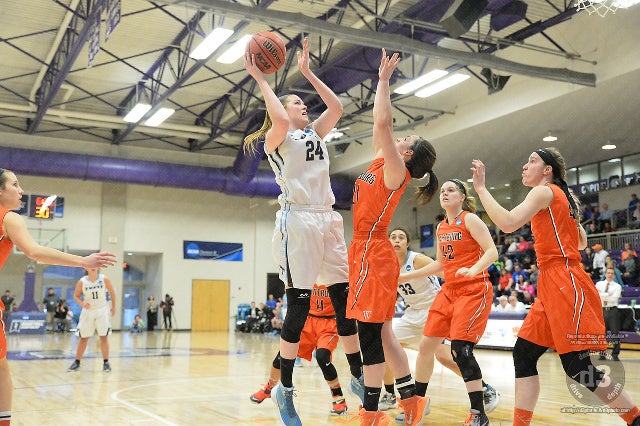 Junior Michaela North scored 13 points and grabbed 10 rebounds against Wartburg College. Photo: Eric Kelley/D3 Photography
Back-to-back baskets by junior All-American Michela North extended the Tufts lead to 54-43 as the clock wound down under three minutes. Wartburg’s Morgan Neuendorf (team-high 16 points) ended the 7-0 Tufts spurt, but the Jumbos got a free throw from Dillon and another basket by North to lead 57-45 with 1:18 remaining in regulation. North had seven of her 13 points in the fourth. Dillon drained five free throws in the final minute to close the victory. “We knew they were going to be physical, so we just had to take it to them,” says North.

In the first half, Dillon had 10 points and Melissa Baptista scored eight for the Jumbos. But Wartburg slowly caught up in the second half, down only four, 47-43, at 4:49 of the fourth.

That’s when Dillon hit her huge three, one of seven that Tufts had in the game. Baptisa was four for nine from distance for the Jumbos. Wartburg, one of the better three-point shooting teams in the nation, made just three of 12 in the game. Tufts didn’t help itself at the free-throw line, making just 14 of 24 (58.3 percent).

Baptista finished with a double-double of 14 points and 12 rebounds while also blocking four shots and making five steals. North notched a double-double as well, with 13 and 10. Junior Josie Lee led Tufts with five assists, and came down with six rebounds and scored four points.

“We’ll work hard to get prepared and make sure they know this upcoming opponent inside and out,” says Berube. “I can’t be more thrilled that we have one more game, the last game of the season, which is really special.”

Sports information director Paul Sweeney can be reached at paul.sweeney@tufts.edu.