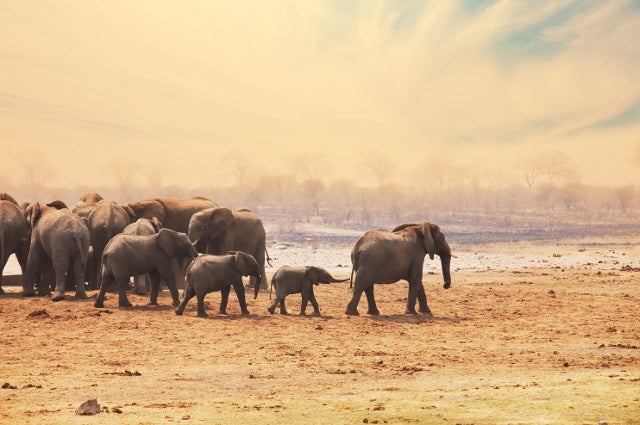 For more than three decades, Dale Peterson has written with raw honesty about threats to wildlife populations. His collaboration with acclaimed photographer Karl Ammann turned an unblinking eye on Africa, where animal populations are vanishing because of poaching, habitat destruction, disease and civil unrest. Before going their separate ways, Peterson, a lecturer in English at Tufts, and Ammann coauthored groundbreaking books that reveal, often in horrific detail, hard truths about humans and wildlife: Eating Apes (2003), Elephant Reflections (2009), and Giraffe Reflections (2012).

Peterson’s latest book, Where Have All the Animals Gone? My Travels with Karl Ammann (Bauhan Publishing), recounts his “privileged opportunity” to work with the photographer, who was named a Time Magazine Hero of the Environment in 2007. It is both an admiring portrait of a fearless activist and a chronicle of the experiences the partnership with Ammann afforded Peterson—experiences that would be available to few—if any—tourists.

Peterson has seen the ape orphanages that proliferate in Gambia, Sierra Leone and Central Africa, way stations for dozens of baby chimps and gorillas whose mothers have been shot for meat. He has, in the interest of helping Ammann reveal the corruption that allows an illegal ivory trade to flourish, risked arrest by impersonating a tourist shopping for ivory. He has rattled up a muddy river delta in Namibia and been rewarded with the sight of eight beautiful desert giraffes “walking slowly over the silver-grassed plain.”

In a telling anecdote, he and Ammann accompany Pygmy hunters in the forests of the Congo as they use long nets to capture small prey. The hunters try three times, and yet nothing is caught. “The hunt has become a tedious vegetarian’s exercise,” Peterson writes, “and so the question one is provoked to ask is this: Where have all the animals gone?”

Tufts Now: What motivated you to write this book? 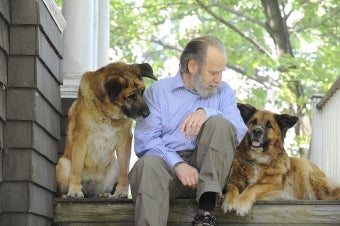 “Even though the knowledge I’ve gained from my work is frightening, I feel that if you’re doing something for conservation, no matter what it is, it’s worthwhile,” says Dale Peterson. Photo: Richard Howard
Dale Peterson: The travels with Karl were such amazing adventures that I could hardly help writing about them. Conservation is my subject, it’s what I have been writing about for some 30 years, but Karl himself is the second part of the story. Karl is very familiar with Africa and can arrange strange trips into strange places, and survive. He’s controversial and hard to get along with, but I am, too, so we made a good pair. So what I’ve written is a kind of biography of him that is also a portrait of apes, elephants and giraffes, and of an environment that is being destroyed much faster than I think anyone would have imagined.

Why did you choose this title?

It seemed to me to summarize our experience. It speaks to what’s happening all over Africa; the animals are disappearing. On our final set of trips Karl was excitedly telling me about all the zebras we were going to see at a particular destination in northern Kenya. He said we were going to see thousands of zebras. We got there and there were none. He was amazed. He had been there five, 10 years ago. That was an extreme case, perhaps, but it was an observation that was consistent throughout our travels. Karl has lived in Africa for probably 30 years, and he was continually remarking, “Where are the animals?” So it’s a logical title.

The book is suspenseful in parts, and can even read like a spy story. For example, when you and Karl go undercover to find out who’s trading in animal meat and ivory, Karl develops a tiny spy camera that he gives to investigators he hires. What was being involved in such things like for you?

Some of the time it was scary. We all could have been arrested in the Congo and thrown in jail. Someone Karl hired to help him wound up on death row in the Congo. We got him out, but it took Jane Goodall and high-level negotiations right up to the president of the country. It’s not a joke to do this kind of work. 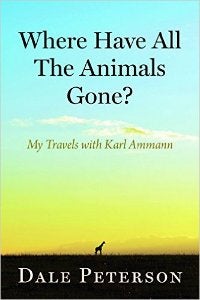 You wrote Jane Goodall’s biography and understand how she thinks about conservation. How much does her approach resemble Ammann’s?

Karl is nervy. He has a kind of boldness, and that is actually very positive. Jane Goodall is the only person who would compare—she is also totally fearless. But Jane and Karl have extremely different perspectives. Jane is a very positive person, so she responds to people’s despair over the disappearance of animal life with a message of hope. Her essential line is the only way you can act is to have hope. She doesn’t dwell on the hard things. By contrast, Karl focuses on getting people to realize how bad the situation is, and he feels that when you start talking about hope you’re essentially selling a lie.

I’ve always known that side of Karl, the angry, despairing, hopeless side. He basically says, “I don’t think it’s possible to do anything, but I’m not going to let people off the hook. I at least want to tell them what’s going on.” That’s his philosophy. And I see exactly what he’s talking about.

But isn’t there a risk in taking such a hard line? Don’t you worry that you’ll just alienate people and defeat your whole purpose?

You can be uncompromising and still be engaging. When we wrote Eating Apes, that was a difficult book. It was about the practice of killing animals like chimpanzees and gorillas for food, which does happen in some parts of Africa. The first question was, what right does a white person have to write about African food choices. My big task was to answer that question in a way that was acceptable, and we succeeded partly by working a lot with African people from start to finish. I think we knew it would never be a popular book. It wasn’t about all the trivia that this culture is fascinated by. But there was one courageous publisher, the University of California Press, that accepted it and made it their top book of the season.

With this current book, I talk about some of the subject matter and people just cringe and say, “Oh, I don’t want to read that.” But it’s my function to tell them these things that they don’t want to know, and to tell them in a way that they can grasp. Part of what I’ve tried to do with the book is make it an interesting and sometimes even humorous story, instead of just a grim catalogue of awful things.

You co-organized a conference at Harvard in 2014 about animal consciousness. What did you learn from that event? Could the human relationship with wild animals change based on a new understanding of the similarity between our mental and emotional lives and theirs?

I found out there is a lot of good neuroscience to indicate that animals have complex feelings. Our understanding of animal emotions has come a long way, especially in the past 25 years.

The conversation I would like to see change is around big game hunting for pleasure—for example, the shooting of elephants, which I regard as murder. It’s the moral equivalent of murder because elephants share so much with us emotionally and cognitively. To shoot one for fun is just beyond any kind of ethical system I could imagine having. Right now I am working on an anthology of writings about elephants, from Aristotle to the present. It’s an attempt to present a cultural, historical and scientific look at elephants, mostly using primary documents.

Throughout your travels you seem to come up against a tension between economic growth and conservation. That’s a global problem, of course, but in Africa the stakes are so high.

Africa is one of the few places where some of the largest animals of the Pleistocene era were protected from predators like humans. The reason had a lot to do with the difficulty of the environment, including the tropical forests. Today, that’s all changing.

But I don’t see conservation losses as the result of a trade-off between economic prosperity and the environment. Essentially the problem stems from governance that is not working, population growth that is not stabilizing, and resource exploitation in which people do not pay for environmental damage. Tropical hardwood, for instance, is relatively cheap in Europe. Companies are cutting down forests that are 600 or 700 years old and destroying a 65-million-year-old ecosystem, but no one is paying for that destruction.

What is your outlook for the future? Can people or countries change?

I am a realist. I try to have as accurate a view as possible. But amazingly, I’m not depressed all the time. Even though the knowledge I’ve gained from my work is frightening, I feel that if you’re doing something for conservation, no matter what it is, it’s worthwhile. Even if you’re just complaining in an effective way, that is what you must do. I myself write, so that is what I will continue to do, and I’ll continue to do it with a conservationist’s perspective.