Sam Ho, M76, has dedicated his career to providing for those who need it most 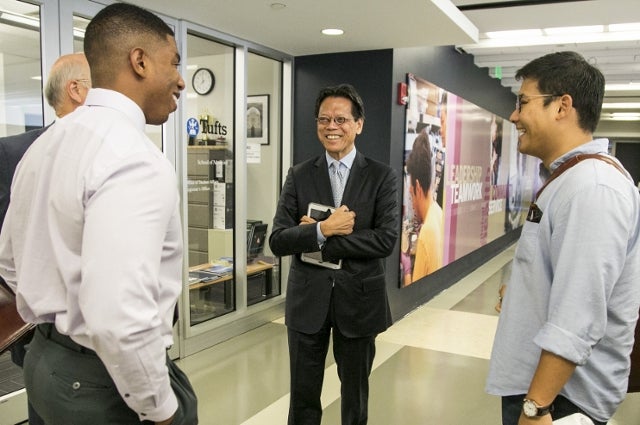 The dark stain on the sidewalk outside the Chicago coffee shop where Sam Ho had been hanging out with friends was unmistakable—a pool of blood that trailed 50 feet down the street. He followed it to an apartment building and up a staircase, where he found an intoxicated man with a deep cut in his scalp. Ho helped the man into his apartment and called an ambulance. As they waited, the middle-aged stranger repeatedly asked Ho why he was bothering to help him.

“It was one of those moments that make you pause,” says Ho, the son of a doctor. “I thought, I need to go to medical school. I need to care for those who need it the most, the urban underserved and the urban poor.” He was just 20, about to start his junior year at Northwestern University, but it was the turning point out of which his career emerged with an intensity of purpose.

Ho, who graduated from Tufts School of Medicine in 1976, recalls that night with characteristic humility. “It’s not a very interesting story,” he says, dismissing any notion of heroics.

He had never before considered following his father, a primary care physician in Honolulu’s Chinatown neighborhood, into medicine. But after that incident, Ho switched his major from sociology to the pre-med track, squeezing four years’ worth of physical science courses into two.

“It was tough to change my whole career program,” he says. “But it was worth it. I was highly motivated.”

Ho applied to Tufts School of Medicine because its longstanding mission of serving the community matched his values, and was able to attend thanks to generous financial aid. “I had access to the best and brightest minds in medical science, and I was able to customize my curriculum so it was relevant to a family physician’s practice,” he says.

Like his father, the young medical student found himself treating patients in a Chinatown neighborhood. Working with residents and social activists in Boston, Ho helped run a free health clinic there. “We operated on less than a shoestring budget, with donated microscopes and discarded exam tables from the medical and dental schools, but we were able to do simple health screenings,” he says.

After graduation and a residency in family medicine at the University of California, San Francisco, Ho practiced for seven years in Visitacion Valley, a large working class neighborhood of San Francisco. With National Health Service Corps funding, he started a clinic to care for the community—his patients ranged from infants to the elderly. He contracted with Medicaid HMOs to provide social services to his patients, such as bus tokens, so they could get to their appointments and screenings at community health fairs.

As Ho grew more aware of the complicated knot of underlying issues that prevent underserved populations from getting good care, such as the fee-for-service payment model that incentivizes quantity over quality for providers, he decided he could help even more patients by moving to the administrative side of medicine. Today, as chief medical officer and executive vice president of the country’s largest health insurance provider, UnitedHealthcare, Ho makes decisions that affect one in six Americans. This family physician now cares for a nation of patients.

“My entire career has been focused on improving American health care,” he says. “Assisting students who are committed to underserved populations, predominantly in primary care, is fundamental to that vision.”

After Ho left his practice in Visitacion Valley, he remained in San Francisco, as deputy director of the city’s health department and San Francisco’s county health officer from 1988 to 1991. His charge was to restructure the department to improve patient care. It was a challenging time for medicine: the AIDs epidemic was in full swing, crack cocaine addiction was a growing public health concern, homelessness had reached an all-time high, and patients who once had been cared for in psychiatric hospitals were flowing into community health clinics.

Ho developed a community-oriented primary care network integrating 14 disparate clinics and dozens of programs into a cohesive primary care system within the health department. “You used to have patients come to one clinic on Monday for maternal and child health, come back on Wednesday for some substance abuse issue, and come back on Friday for something else,” he says. “By addressing everything through a primary care provider, we were doing a better service for the patients and for the community.”

Once he overhauled the department, Ho decided he needed to make another career pivot to do even more for more patients. As executive vice president and chief medical officer of PacifiCare Health Systems, which UnitedHealth acquired in 2005, he instituted innovative managed care programs, such as report cards rating doctors on performance and affordability.

Last fall, Ho visited Tufts School of Medicine for the first time since 1976. He met with students in the Student Service Scholars Program, which trains those who want to care for underserved populations.

Ho wants to make sure that other doctors can also work toward a health-care system where every patient can receive good, regular care, regardless of their means. To that end, he has established the Sam W. Ho, M.D., M76, Scholarship Fund, which will support students interested in primary care, especially in areas where there aren’t enough doctors. His gift will be matched by Tufts’ Financial Aid Initiative, thereby doubling his donation.

Financial aid helped him pursue his goals, and the importance of that is not lost on Ho. “There’s a whole generation of inquisitive, curious, informed and committed medical students who can do anything to make change in this world and make it a better place for patients and doctors,” he says. “Hopefully this scholarship fund can be just one factor in changing health care in America.”