Two Cummings School of Veterinary Medicine faculty have been appointed to named professorships, the highest academic award a university can bestow on a professor.

Eugene White, who heads the Tufts Ambulatory Service, a group veterinary practice that cares for dairy cattle, other food animals and horses, has been appointed to the Amelia Peabody Foundation Chair in Agricultural Sciences. Megan Kiely Mueller, A08, G10, G13, whose scholarship focuses on human-animal interactions, is the inaugural recipient of the Elizabeth Arnold Stevens Junior Professorship. 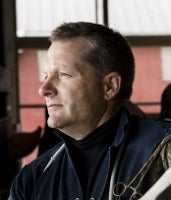 Eugene White. Photo: Alonso Nichols
White earned a D.V.M. degree with distinction in 1995 from Cornell University School of Veterinary Medicine. Board-certified as a dairy practitioner by the American Board of Veterinary Practitioners, he is also associate chair of the Department of Environmental and Population Health.

White teaches students in all four years of veterinary school, and students have chosen him as Best Lecturer, White Coat Ceremony speaker and Commencement speaker.

His research interests include sustainable agriculture in New England, lameness in cattle, and in vitro production of bovine embryos; he has published in journals, textbooks, abstracts and technical reports. White is a consultant to the Smithsonian and SVF Biodiversity Preservation Project, which preserves rare breeds of domestic farm animals. He also consults with international governments and farmers on ways to promote sustainability in the dairy industry.

To mark his new appointment, White will present a public lecture, “Honoring the Legacy of the Past by Forging the Future of Food Animal Practice,” on April 12 at 3 p.m. in the Agnes Varis Auditorium on the Grafton campus, followed by a reception to honor him and to thank the Amelia Peabody Foundation, which funded the professorship.

Megan Mueller. Photo: Alonso Nichols
Megan Kiely Mueller joined Cummings School in May 2013 after completing her Ph.D. in child development in Tufts’ Eliot-Pearson Department of Child Study and Human Development with Richard Lerner, director of the Institute for Applied Research in Youth Development at Tufts.

She has been instrumental in advancing human-animal interaction research and teaching across the university, most recently as associate director of the Tufts Institute for Human-Animal Interaction (TIHAI). She is a faculty member in clinical sciences and the Center for Animals and Public Policy at Cummings School and is a senior fellow at Tisch College at Tufts.

Her research focuses on relationships between humans and animals, and her interests include the impact of animal ownership on youth growing up in military families, the ways equine-assisted therapy can promote mental health, and the integration of animals into science, technology, engineering and mathematics (STEM) education. Her work on the psychological benefits of human-animal interaction has been published in scientific journals such as Human Development and Journal of Youth Development, and has been featured in Scientific American and the Huffington Post.

On April 8, Mueller will present a public lecture, “The Developing Science of Human-Animal Interaction,” at 3:30 p.m. in the school’s Agnes Varis Auditorium, followed by a reception to celebrate her appointment.