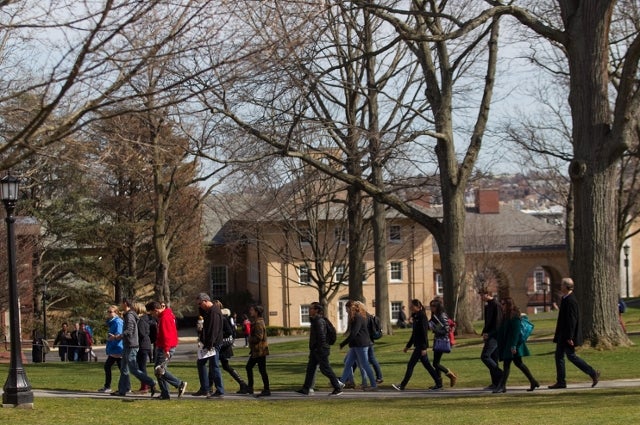 The members of Tufts’ undergraduate Class of 2020 are trendsetters even before they set foot on campus. The newest Jumbos class recorded a record-breaking acceptance rate of just 14 percent—a 2-point drop from last year—making it the most selective in university history. This year’s acceptance is 11 percent below what it was six years ago. It is also the most diverse class of admitted students in more than a decade.

The students who will come to campus in August were chosen from a record number of applicants. The university received 20,223 applications—the first time applications have exceeded 20,000—for the School of Arts and Sciences and the School of Engineering, a 6 percent increase over the last two years.

Altogether, the projected number of new undergraduates who will enroll for the fall will be 1,325. Of the accepted applicants, 51 percent are female, 56 percent attended a public high school, and 10 percent are the first generation in their family to attend college. Forty-four percent applied for need-based financial aid.

The accepted students come from all 50 U.S. states, Washington, D.C., and Puerto Rico. Thirteen percent are from locations outside the U.S., and 18 students are undocumented U.S. residents.

The mean SAT scores are 727 in critical reading and 738 in math, and the mean ACT score was 32. Among students from schools that made class rank available, the mean ranking was in the top 4 percent.

Accepted students have until May 1 to make a deposit on their first-semester tuition, letting Tufts know that they will be here in the fall. Open house days for accepted students and their families—known as Jumbo Days—are April 15, 21 and 22.