When newborns struggle to breast-feed, a simple surgery may be the answer 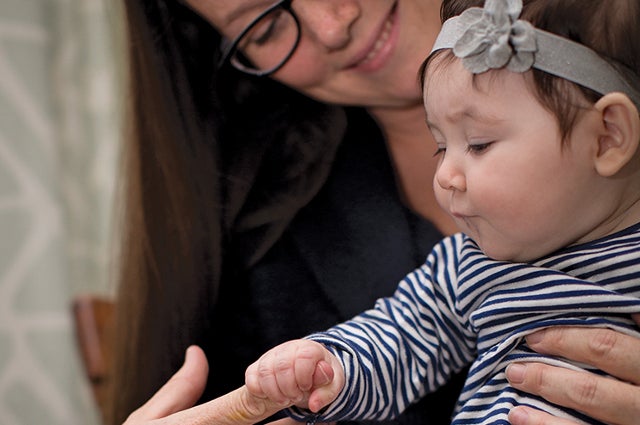 It’s a Thursday morning, and Martin Kaplan, D75A, a pediatric dentist in Stoughton, Massachusetts, is seeing his second infant of the day. He scans a form filled out by Courtney Baker, who holds her 3-month-old daughter, Scarlett.

“Thrush?” he asks, referring to the painful infection that can affect both the baby’s mouth and the mother’s breasts.

“Three rounds of it.”

Kaplan examines the sweet, dark-haired baby. He soon confirms what the mother and her lactation consultant suspected: Scarlett has a lip-tie and tongue-tie.

In infants with tongue-tie, the frenum—the string of mucosal tissue that connects the tongue to the bottom of the mouth—is too short, limiting a baby’s ability to move the tongue. Studies indicate anywhere from 0.2 percent to 10 percent of newborns are born with this condition.

Similarly, a lip-tie restricts the movement of the upper lip from the gums. Lactation experts say either condition can make breast-feeding difficult, because the baby cannot latch onto the breast properly, leading to sore nipples, long on-and-off feeding sessions, lots of gulped air and decreased milk production in the mother.

The treatment is a frenectomy, the snipping of the frenum to free the tongue and/or upper lip. Physicians and midwives reportedly have performed frenectomies for hundreds of years. The simplest means is to snip the frenum with scissors, but it can also be excised and sutured, or treated with a laser.

The practice fell out of favor in the 1950s and ’60s, when bottle feeding became more common. (Tongue-ties don’t cause as many problems in bottle-fed babies.) But now that public health advocates have widely recognized the benefits of breast milk in bolstering infants’ immune systems, experts are looking closely at frenum removal as a way to help more mothers breast-feed successfully.

Still, the quick-and-simple procedure remains controversial. Not everyone agrees on what constitutes a tongue-tie, whether a tongue-tie needs to be treated, or what treatment is best.

Frenectomies have become a huge part of Kaplan’s practice in recent years; he estimates he treats about 600 infants and toddlers annually. He uses a laser, which removes layers of tissue by vaporizing the water within the cells. The benefits, Kaplan says, are minimal bleeding (usually none), no sutures and a low risk of infection, because the laser essentially cauterizes the wound. Kaplan doesn’t even use anesthetic.

There is, however, lots of crying, which usually starts as soon as the dental assistants start to swaddle the baby. (After a few fainting incidents, Kaplan no longer lets the parents stay in the operatory.) But in less than a minute, it is over. In a much-practiced move, Kaplan scoops up Scarlett and rocks her with a soothing “shush, shush.” She quiets almost immediately. With a bouncing gait, Kaplan carries her down the hall to her mother.

Kaplan is scheduled to evaluate seven more infants for tongue-ties the next day. The demand is so great, he says, that he could devote his practice entirely to this one procedure.

A baby with a tongue- or lip-tie tends to suckle on the tip of the nipple, which is painful for the mother and less effective for the baby. Over time, the condition can reduce the amount of milk the mother produces, possibly leading her to stop breast-feeding sooner than the one year that is recommended by the American Academy of Pediatrics. While 75 percent of new mothers start out breast-feeding, only 43 percent of them still breast-feed by the time their infants are 6 months old, according to the Centers for Disease Control and Prevention.

“If the babies cannot get a deep latch, if they are swallowing air, they are going to have issues,” says Fawn Rosenberg, D85, a family dentist in Lexington, Massachusetts, who started doing laser frenectomies about 15 years ago. “Plus the mothers are in so much pain. Breast-feeding should not be painful.”

Rosenberg says she breast-fed her three children, the youngest until she was 3. “I’m a big believer in the benefits of breast milk,” she says. “I think that every mom should have the opportunity to feel close to their babies in this way.”

The problems don’t end at breast-feeding, she says. Older children may have trouble chewing solid food or have a lisp or other speech problems. Kids with a lip-tie can develop a gap between their front teeth. Because the baby is unable to push the tongue against the roof of the mouth, it can lead to the development of a narrow upper palate, which, Rosenberg says, can cause breathing problems.

Although she has corrected tongue- and lip-ties on patients of all ages, including adults, Rosenberg believes early treatment is best. “The younger they are, the faster they heal, and some of the real young ones will actually sleep through the procedure,” she says.

Postfrenectomy, Kaplan and Rosenberg stress that parents must do exercises with their infant to prevent the frenum from reattaching and to train the newly mobile tongue. This includes having the baby suck on a finger and lifting and stretching the tongue four or five times a day.

Dentists who perform laser frenectomies need to have extensive training, says Kaplan, who is working on a book about the procedure with Alison Hazelbaker, a lactation therapist, and Robert Convissor, the director of laser dentistry at New York Hospital Medical Center of Queens. The continuing education classes the three of them are teaching on the subject at Tufts School of Dental Medicine quickly sold out.

Not everyone has embraced the dentist’s role in infant frenum surgery. The American Academy of Pediatrics says that tongue-tie “usually resolves over time with tongue use” and “does not usually present a problem for speech or eating.” Rosenberg has had parents cancel frenectomy appointments after meeting with their family doctor.

Andrew Scott, a pediatric otolaryngologist at Tufts Medical Center and an assistant professor at Tufts School of Medicine, approves of frenectomies for tongue-tied babies who have trouble breast-feeding, but he is not sold on the value of using a laser. Using a scissors, he says, has the same benefits: little-to-no bleeding, low risk of infection, a quick procedure and no anesthesia needed other than sucrose solution. “We cut ties in the nursery on babies who are hours old this way,” he says. Children older than 4 to 6 months he treats under general anesthesia.

Scott also disputes the claim that tongue-ties can cause speech or airway problems, noting that the body of research does not support this, except in severe cases.

Some medical providers even disagree about what constitutes a tongue-tie. Ear, nose and throat physicians, Rosenberg says, will often treat an anterior tongue-tie that is close to the tip of the tongue, but not a posterior tongue-tie, which is less obvious, or a lip-tie.

As for lip-ties, “there is no evidence out there that these interfere with nursing,” Scott says. “Most of the anecdotal stories of improvement in nursing after cutting a lip-tie are clouded by the fact that a tongue-tie was also released at the same time. I have never seen an isolated lip-tie cause nursing impairment. It does lead to gapping in the front teeth, however, and intervening for that is completely reasonable.” He defers to dentists and orthodontists on when that is indicated for older children.

Sara Ryans of Plainville, Massachusetts, noticed early on that her son Alexander did not breast-feed the same way her first child had. He needed to be nursed on a pillow in order to get a good latch. But Alexander continued to grow at a fast pace. It wasn’t until the family went on vacation and she needed to breast-feed him on the go that things became more difficult. Suspecting a tongue-tie, she went to an ENT, who was reluctant to do anything because 5-month-old Alexander was gaining weight. He said he would have to use general anesthesia and do the procedure in an operating room.

When Ryans read about laser frenectomy, she decided that was the better option, and made an appointment with Kaplan for August. Minutes after Kaplan completed the procedure, releasing both a lip-tie and a tongue-tie, Ryans says she was glad to be nursing Alexander rather than waiting for him to awaken from anesthesia.

She says she noticed a difference right away. “The suction was definitely better, like he was in a better position,” she says. Alexander, who was smiling broadly, seemed to agree.

As for little Scarlett, she wasn’t interested in nursing immediately after her procedure, and was uncharacteristically fussy that night. “But the next day, she was perfectly fine, back to her normal, happy self,” says her mother, Courtney Baker.

“I wish this was something I did from day one, had I known.”

This article first appeared in the Winter 2016 issue of Tufts Dental Medicine magazine.