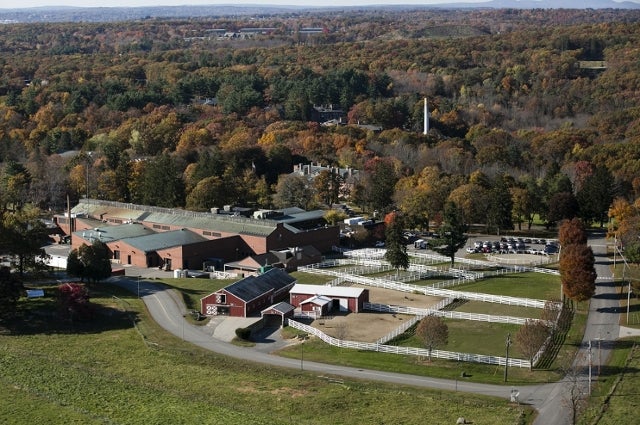 The rain garden at the new Collaborative Learning and Innovation Complex building on the Medford/Somerville campus is an inviting place for coffee or lunch, but when the clouds open up, it’s all business.

Water draining from the roof is captured and filtered in two large underground chambers, and then slowly drains into the underlying soil, protecting the Mystic River watershed from pollutants picked up by storm water.

The garden is just one of many sustainability initiatives highlighted in the 2015 Campus Sustainability Progress Report, a chronicle of the university’s commitment to conserve water and energy as well as curb waste and carbon emissions. The annual report assesses Tufts’ progress toward achieving its vision outlined in the May 2013 President’s Campus Sustainability Council Report [PDF]. The goals include reducing waste by 3 percent a year, curbing energy consumption by 5 to 7 percent over the next three years, and cutting greenhouse gas emissions by as much as 85 percent over the next three decades.

“This report reflects a vital commitment to sustainability across Tufts,” says President Anthony P. Monaco, who established and chairs the Campus Sustainability Council. “Students, staff and faculty continue to work together to create a culture of sustainability that has an impact across our campus operations. I am grateful for their extraordinary energy and ideas, which are moving Tufts closer to the sustainability goals we share.”

The Collaborative Learning and Innovation Complex, a former factory at 574 Boston Ave., is the most recent showcase for the university’s conservation efforts. The building has high-efficiency plumbing fixtures that use 33 percent less water, high-efficiency lighting, and water bottle filling stations, for example, and, like the rest of the university, is maintained using green cleaning materials.

But it is hardly the only place where sustainability is going strong. University-wide, for instance, 12 offices and departments last year earned Green Office Certification, in recognition of their documented efforts to pursue sustainable practices. That brings to 24 the total number of certified green offices at Tufts. And because meat production generates far more carbon emissions than growing plants, undergraduates pledged—and met their goal—to eat 2,000 vegan or vegetarian meals in the dining halls as part of the student-organized Meatless Monday campaign.

The community is also reducing its food waste. Last year, the university launched a new program that donates leftover dining hall food to Food for Free, a Cambridge nonprofit that redistributes food to people in need, and students started collecting compost in their classrooms at the Cummings School of Veterinary Medicine.

The university has upped the green quota on its transportation functions. A hybrid Prius V is used to ferry mail from the Medford/Somerville campus to the veterinary school in Grafton, which has added an electric motorcycle to its police patrol fleet. Tufts also maintains two one-way Zipcars, allowing drivers to pick up a car on the Medford/Somerville campus and reserve drop-off spots, including near the health sciences campus in Boston.

The 2015 sustainability report for the first time includes Tufts’ ranking from the Sustainability Tracking, Assessment and Rating System (STARS), a framework for self-reporting that colleges and universities use to benchmark their sustainability performance. Institutions are rated based on their achievements in four areas: academics, engagement, operations and planning, and administration. In 2015, Tufts’ three campuses in Massachusetts achieved a silver rating.

There’s even more green on the horizon. When the new central energy plant on the Medford/Somerville campus comes online, it will reduce greenhouse gas emissions there by the equivalent of more than 10 million passenger car miles driven. The new Science and Engineering Complex, also scheduled to open in 2017, will be one of the most energy-efficient buildings of its kind in the country.

Laura Ferguson can be contacted at laura.ferguson@tufts.edu.