A Career Devoted to Bearing Witness

Anderson Cooper spoke at Tufts’ Edward R. Murrow Forum about his sense of responsibility to the people he covers 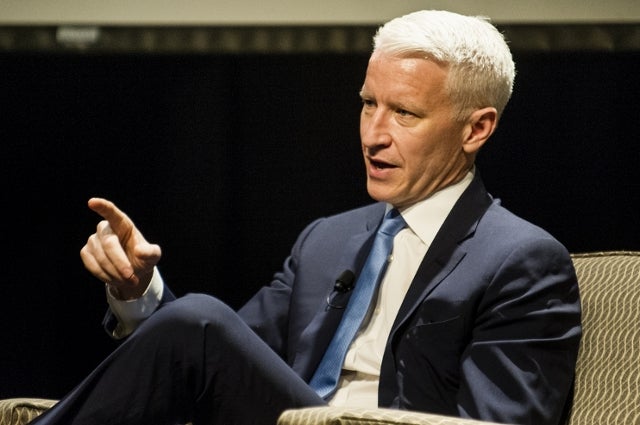 Over the course of his award-winning career, CNN anchor Anderson Cooper has covered regions traumatized by disaster, famine and conflict, meeting people at what might be the “worst possible moment” in their lives.

It was in precisely those moments that he forged a philosophy about journalism. In Sri Lanka after the 2004 tsunami, he recalled seeing a train knocked off its tracks and a “horrific scene” of crushed steel mingled with human bodies. “This [was] a burial ground,” he said, and while it was painful to look upon, he, as a storyteller, had “a responsibility to share this with other people.” To do that, “you have to be willing to be open to it and to be changed by it.”

Recalling the aftermath of Hurricane Katrina, where he was part of a body recovery unit, he couldn’t forget a family of four—two parents and their disabled sons—who, trapped by rising waters, drowned in their living room. “I still see them whenever I close my eyes,” he said. “It’s important to carry them on.”

That sense of responsibility, to respect the people he covers, he said, gives shape and meaning to his stories and to his own life. “My job is to tell stories and to bear witness to other human beings,” he said. “This is life and death . . . and [their stories] deserve justice.”

Cooper, at once deeply personal, profound and funny, opened up about his craft and life as part of Tufts’ 11th annual Edward R. Murrow Forum on Issues in Journalism on April 11 before a packed Cohen Auditorium on the Medford/Somerville campus.

Jonathan M. Tisch, A76, vice chair of the Tufts Board of Trustees, interviewed Cooper, anchor of CNN’s Anderson Cooper 360°, a nightly newscast, and author of the 2006 New York Times bestseller Dispatches from the Edge.

Cooper spoke just two days after the premiere of the HBO documentary Nothing Left Unsaid, featuring him and his mother, Gloria Vanderbilt, in candid conversations about themselves, their family and their relationship with each other. The documentary coincides with the release of their book, The Rainbow Comes and Goes (Harper), which he signed prior to the forum.

Coming to Grips with Loss

Cooper’s attraction to journalism has emotional roots in his childhood and adolescence. He grew up in New York City, one of two boys born to writer Wyatt Emory Cooper and the artist, designer, writer and heiress Gloria Vanderbilt. When he was 10, his father died, and later he lost his older brother, who was just 23, to suicide. Cooper was in his senior year at Yale, and, confronted by grief, he simply longed to get away. He wanted to travel abroad and to focus on “issues of survival” that would help him come to grips with his loss and understand “how to get along in the world.”

His purpose would be found on literal battlegrounds. On one of his first forays as a freelance war reporter, he snuck into Burma for a story about student protests.

“I had a video camera and I put together a story, and I knew, ‘This is it,’” he recalled. The well-known words of mythologist Joseph Campbell actually sum it up best. “His advice was to ‘follow your bliss,’” Cooper said. “I knew that was my bliss. It had all the things I wanted in my career and all of what I wanted in my life.”

He would go on to get a full-time job as chief international correspondent for Channel One News, a school television network, reporting and producing stories often on his own, about conflicts in Bosnia, Cambodia, Haiti, Israel, Russia, Rwanda, Somalia and South Africa. He then joined ABC as a news correspondent, rising to correspondent for World News Tonight, as well as 20/20. These days, Cooper can be seen on CNN and on CBS’s 60 Minutes. He extensively covers the current presidential election, including moderating presidential debates.

Among his accolades are a Peabody Award for coverage of Hurricane Katrina and an Alfred I. duPont-Columbia University award for reporting on the 2004 tsunami. He has won eight Emmy awards and an Edward R. Murrow Award.

Cooper laughed when he acknowledged that he is readily recognizable on the street these days, saying he has little interest in his celebrity status. “I don’t think of myself as a public person,” he said, adding that he changed his route to work in New York to avoid seeing a massive CNN billboard bearing his face.

“It makes me wildly uncomfortable, and it has no reality,” he said. Besides, he added, fixation with celebrity is a lot like “gangrene. You have to watch it very carefully or it will spread up to your whole body. Your job as a reporter is to be a fly on the wall, not to be an entity in your own right.”

Cooper returned to the theme of “bearing witness” as a storyteller when he described trying to find the right kind of stories to share with his television audience. “I hesitate to say ‘story.’ You are touching people at the worst moments in their lives,” he said, recalling distraught parents in Haiti pushing their dead child in a wheelbarrow, desperate amid the chaos to bury him. “It’s a tough situation to navigate. . . . You need a sensitivity and respect” for what people are going through.

That sensitivity translates into what he sees as well. While usually shadowed by a camera crew, he also carries his own small digital camera; it allows him to be more nimble than would be possible with cumbersome equipment, and more subtle.

“It’s often in the small details that a larger truth can be told,” he said. Walking through a marketplace, it may be difficult to capture the specific sights and smells, “but that is what you are there do to . . . and often less is more.”