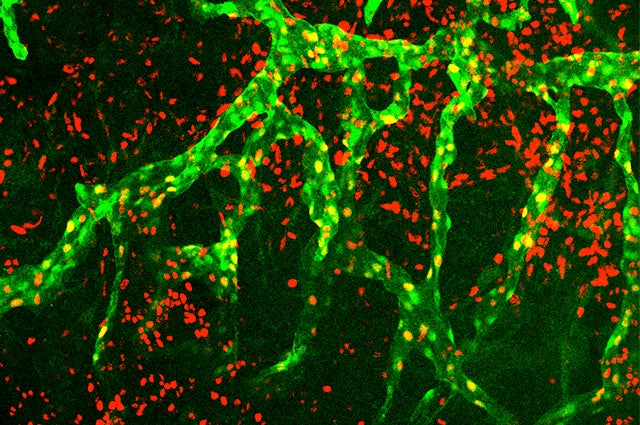 BOSTON (April 12, 2016)—After an injury to tissues, such as in organ transplantation, the body grows new lymphatic vessels in a process known as lymphangiogenesis. A new study in Nature Communications reveals a mechanism involved in the regulation of this process, specifically in corneal transplants and infectious eye disease. The team, led by researchers from Tufts University School of Medicine, the Sackler School of Graduate Biomedical Sciences at Tufts, and Tufts Medical Center, successfully prevented corneal inflammation, a condition that adversely affects transplantation, by inhibiting the overgrowth of these lymphatic vessels in a mouse animal model.

Lymphangiogenesis (pronounced “lymph” and then “angiogenesis) plays a significant role in organ transplant rejection, cancer metastasis, lymphatic obstruction (lymphedema), diabetes and hypertension. In recent years, because of the identification of lymphatic-specific markers, lymphangiogenesis has become a rapidly expanding field of research.

The researchers from Tufts first determined that galectin-8 promotes the growth of new lymphatic vessels by a novel, carbohydrate-dependent mechanism and thus increases the risk of corneal transplant rejections. They then successfully identified approaches to inhibit galectin-8 and reduced the detrimental inflammatory lymphangiogenesis.

In separate tests, the research team also found that mice without the galectin-8 protein were more resistant to eye infections caused by herpes simplex virus. Previous studies had found that herpes simplex virus infections in the cornea (keratitis), a debilitating corneal infection, caused lymphangiogenesis. Importantly, the research team found that galectin-8 deficiency did not affect the overall health of the mice but played a key role in modulating the severity of inflammatory diseases.

The first author on the study is Wei-Sheng Chen, Ph.D., who did this work as part of his Ph.D. studies in Cell, Molecular & Developmental Biology at the Sackler School. He is now a postdoctoral fellow in senior author Noorjahan Panjwani’s research lab at Tufts. Panjwani, Ph.D., is a professor in the department of ophthalmology at Tufts University School of Medicine and a member of three program faculties at the Sackler School.

“Galectin-8 is a potent lymphangiogenic factor and we hope that this knowledge contributes to new preventative treatments. We hope to explore it further to prevent corneal transplant rejection, but also to help find treatments for dry eye and other ocular diseases,” said Panjwani. “These findings also potentially lay the foundation for a new approach to preventing a number of debilitating diseases, including non-eye organ transplant rejection, cancer metastasis, and lymphedema.”

“Although it requires future studies, it is possible that carbohydrate-based galectin-8 inhibitors could be used in the treatment of chronic inflammatory diseases, as well,” he continued.

This research was supported by the National Eye Institute of the National Institutes of Health under award numbers R01EY007088, R01EY009349, and R01EY022695; the Mass Lions Eye Research fund, New England Corneal Transplant Fund and Research to Prevent Blindness.