What are the symptoms of concussions, and what are the best ways for athletes to deal with them?

Jessica Harney, a lecturer for Tufts graduate programs in occupational therapy, weighs in

Concussions can happen to anyone, anywhere, anytime. As many as 5 to 10 percent of athletes will experience a concussion in any given sport season, resulting in 3.8 million sports- and recreation-related concussions in the United States each year.

Such injuries can be caused by a direct blow or jolt to the head, or by a blow elsewhere if the force of it affects the head. As a result of impact, altered brain function occurs. Concussions develop through chemical and metabolic fluctuations in the brain, and it can take minutes, hours, days or weeks to return to normal. 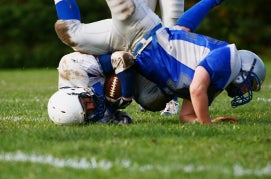 It is important to understand that no one single symptom is more important than others. In addition, symptoms may be immediate, but could also be delayed by hours or even days. Photo: iStock

Concussions are known as the “invisible injury” and often go unreported and undiagnosed. Common opinion is that athletes do not report concussion symptoms because they want to continue participating in the sport. Statistics, however, show that concussions often go unreported because athletes as well as coaches and trainers do not know or understand the symptoms, and are not even aware that a concussion has occurred.

Contrary to popular belief, an athlete does not have to lose consciousness to sustain a concussion; fewer than 10 percent of sports-related concussions involve a loss of consciousness. Someone who has sustained a concussion may simply appear dazed or confused or “glazed over.” He or she may appear clumsy. The pupils of the eyes may be dilated and/or unequal. He or she may experience short-term memory defects or provide delayed responses to questions.

People who have experienced concussion themselves often report headache, dizziness, nausea, lethargy, sensitivity to light, difficulty concentrating, or double vision or changes in vision. It is important to understand that no one single symptom is more important than others. In addition, symptoms may be immediate, but could also be delayed by hours or even days.

There is no cure for a concussion, but proper treatment can reduce symptoms and improve function. The best treatment is complete physical and cognitive rest. Studies have shown that symptoms persist or become worse with mental exertion, physical exertion, emotional stress and environmental stimulation. Physical rest includes no cross-training, weightlifting, or participation in athletics or physical education. Cognitive rest includes no computer time, texting, video games or TV watching. Initially, academic demands such as studying, homework and test taking should be limited as well.

Every athlete wants to know: When can I go back to playing my sport? They will be happy to learn that proper management of concussions will lead not only to better outcomes but to a timely return to play. Coaches, parents and the athlete need to work with the medical team to manage concussions.

Generally speaking, an athlete should be asymptomatic at rest before returning to activities requiring physical and cognitive exertion. Returning to play too early can have detrimental effects on complete recovery and leave the athlete vulnerable to second-impact syndrome, a rapid, severe and sometimes deadly swelling of the brain that can occur when a second concussion is sustained before the first has healed. It is strongly recommended that an athlete have medical clearance from a qualified health-care professional before returning to sport.

The reality is that we cannot put ourselves or our athletes in a bubble of protection. We may not be able to prevent concussions, but with knowledge, we can reduce the risk of serious damage from them. Proper play techniques, proper equipment and other measures to promote safety are also important, because they will make concussions less likely.