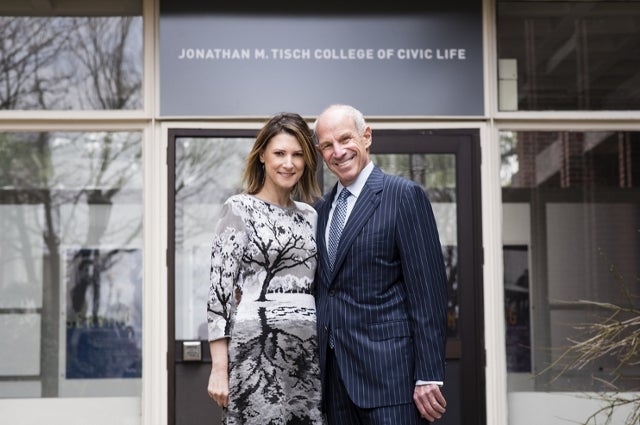 As the nation continues to engage in increasingly fractious political discourse, it’s more important than ever to develop a community of leaders who are able to rise above the fray and bring positive change to the public sphere. Fostering such change has been a cornerstone of Tisch College, and now, with a $15 million gift from Lizzie and Jonathan Tisch, A76, and a new name that more clearly describes its mission, the Jonathan M. Tisch College of Civic Life is poised to extend its reach, both on campus and in the world.

The Tisches’ gift, announced on April 14, will endow professorships in the emerging field of civic studies, which examines why people get involved in causes and what happens when they do; support ongoing research on youth voting and political engagement, among other topics; and expand opportunities for students from all socioeconomic backgrounds to participate in service learning and leadership development programs as well as internships.

“Lizzie and I believe in the evolution of Tisch College and wanted to help ensure that it has a bright future, offering even more to the students at Tufts for decades to come,” says Tisch, vice chair of the Tufts University Board of Trustees. “What we’re seeing here at Tufts is that young people today want to be engaged. They want to make a difference. Hopefully they will bring the experience and knowledge from Tisch College with them as they work with others to create an even better world.”

Tufts takes seriously its role as an engine for social good. “We believe that higher education has a responsibility to act to help young people become agents for thoughtful advocacy, action and positive change,” says Tufts President Anthony P. Monaco. “Jonathan and Lizzie Tisch share this belief. Their generous support will enable us to help prepare every student for this important role, whether they’re studying to be a physician or a diplomat, an actor or an engineer.”

The Tisches’ investment in Tufts, Monaco notes, “will advance the university’s standing as an intellectual center for studying civic life.”

Jonathan Tisch, co-chairman of the board and a member of the office of the president of Loews Corp. and chairman of its subsidiary, Loews Hotels, has been a longtime champion for addressing society’s problems via the civic engagement of individuals and corporations. Ten years ago, he made a $40 million gift to Tufts to endow the first institution-wide college of its kind, the University College of Citizenship and Public Service, as the Jonathan M. Tisch College of Citizenship and Public Service. He is the co-author of Citizen You: Doing Your Part to Change the World (Crown Publishers, 2010), which profiles a number of individuals who have gone well beyond simple acts of volunteerism to make a sustained commitment to solving seemingly intractable social problems.

In the decade since Tisch’s initial investment, the college has emerged as a leader in education, research and practice and has gained recognition as the foremost authority on youth voting patterns and civic engagement in the U.S.

“It is clear that we need the talent, diversity, activism and civic engagement of the millennial generation to address major problems and shape a more just, equal and prosperous future,” says Alan Solomont, A70, A08P, the Pierre and Pamela Omidyar Dean of Tisch College and former ambassador to Spain and Andorra. “The Tisches’ gift is an investment in helping to ensure that all students have the tools for a healthy civic life, both during their time at Tufts and, more importantly, as they carry on in the world.”

Each of us has a professional life and a personal life, says Jeffrey Stewart, A90, who chairs the board of advisors to Tisch College. What Tisch College does is instill that third crucial component, civic life, in every student who graduates from Tufts, he says.

“Civic life—in those two words, you get a sense of responsibility, you get how civility is needed in today’s world,” says Jonathan Tisch.

Deb Jospin, J80, A14P, who served as director of AmeriCorps from 1997 to 2001, has been part of the civic engagement movement at Tufts since the beginning. “It doesn’t matter what your politics are, as long as you are engaged in the civic life of your community,” she says.

It’s important, says Jospin, formerly a longtime chair of the Tisch advisory board, “to weave civic life and civic responsibility into everything you do, to make it an important part of your life, how you view the world, and how you interact with the world.”

Programs for Students and Faculty

That global engagement begins on campus. More than 250 students have participated in the Tisch Scholars, a leadership development program to create positive social change in communities near Tufts’ three Massachusetts campuses in Medford/Somerville, Boston and Grafton.

Another program, the Tisch Summer Fellows, supports students in 10-week, full-time public interest internships in Washington, D.C., New York City and the Boston area; an international component of the program funds student-driven projects around the world. The internship program is growing. This summer, nearly 80 students, up from 46 last year, will work on Capitol Hill, and at the Pentagon and the Massachusetts State House, as well as with many nonprofits—12 of them overseas.

The college also runs a Faculty Fellows program, supporting Tufts faculty who integrate active citizenship into their teaching and research. More than 125 faculty members from across the university have participated, and recent projects include field research on women political leaders in West Africa and a new course on social entrepreneurship.

While Tisch College is physically located on the Medford/Somerville campus, its work extends to every school at the university. For example, in 2014, the School of Medicine, in conjunction with Tisch, instituted a graduation requirement that students perform a minimum of 50 hours of service in a community-based organization or through an independent project of their own creation. In 2015 alone, medical students completed more than 10,000 hours of service at 30 nonprofit partner organizations.

“That whole notion of throwing a pebble in the water, and seeing the ripples go out—that is what Tisch College is doing with its students,” says Stewart, the chair of the Tisch advisors. “These individuals are really changing the world, making it a better place.”

The new professorships that will be created through the Tisches’ philanthropy are part of an ongoing effort to advance Tisch College as a national leader in civic studies. Faculty in these positions will hold joint appointments in Tisch College and in another school at Tufts.

The Tisch research program, including the Center for Information and Research on Civic Learning and Engagement (CIRCLE), the nation’s leading center on youth voting and political engagement, and the Institute for Democracy and Higher Education, which is conducting a first-of-its-kind national study of college voting rates at 800 participating institutions, “is on a growth trajectory,” says Peter Levine, the college’s associate dean of research. “We have 10 social scientists on staff doing research. We have an agenda of trying to change civic life in America.”

One way to achieve that goal is to develop better high school civic education, says Levine. “A civics class is not the only way to improve civic life, but our research shows it works and it can reach all young people.” He points to work Tisch researchers did to help implement Florida’s new required course and exam for civics.

Another component of the Tisch experience is the new 1+4 Bridge-Year Service Learning Program, in which accepted undergraduates spend a year doing full-time community service before beginning their four years of study on campus. The initial class of 15 students will complete their assignments in Nicaragua, Spain and Brazil in May. Through a recently announced collaboration with City Year, starting this fall, Tufts 1+4 students will also have the option to serve in some of the most disadvantaged school systems in the U.S.

“This is a great example of our trying to innovate and at the same time evaluate programs,” says Levine. The goal is to encourage other institutions to model their own programs after what has worked successfully here, he says. “Our programs serve the Tufts students who take part in them, but they are also experiments.”

All of these programs, Jonathan Tisch says, are what make a Tufts education so valuable. “When you can take what you learn in the classroom and apply it to real-life situations, then it becomes even more indelible in your philosophy and your understanding of your responsibility to the community,” he says. “It allows us to create even more engaged citizens who will graduate from Tufts with an even better understanding of the real world that they are about to enter.”