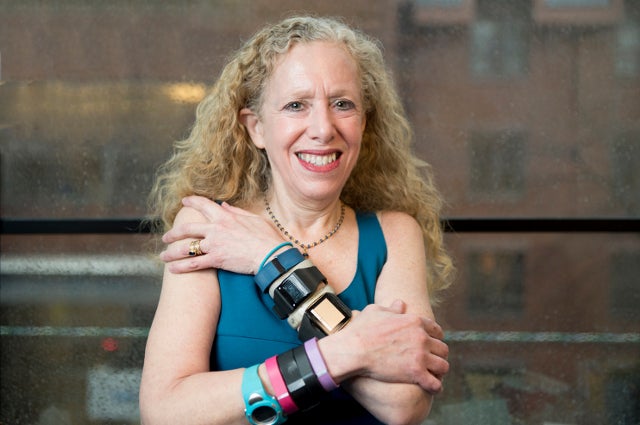 Jawbone, Withings, Fitbit, Garmin—there are a lot of fitness trackers on the market now, all keeping daily stats on your activity and overall health. But what happens when it’s time to upgrade, or when you lose your enthusiasm for workouts? What happens to all the trackers that end up tossed in a drawer?

Lisa Gualtieri, an assistant professor of public health and community medicine at Tufts, has come up with an ingenious idea that gets those unused trackers around the wrists of underserved people who need help leading healthier lives—people who want to rebound from surgery, manage diabetes, lose weight or age well by walking more.

“I’m interested in seeing if giving these populations free wearables, along with training, will provide the incentive they need to be more physically active,” she says.

To that end, Gualtieri launched a new initiative, RecycleHealth, in 2015, waging a tireless social media campaign to increase awareness of this program. So far, she has collected over 200 devices, including a donation of new ones from Withings. They arrive in padded envelopes outside the door of her small Boston office, where the used ones are refurbished for later use.

You can support RecycleHealth through its Tufts University Crowdfunding effort. >>

From there they will move on to their new homes with health organizations that serve a variety of populations, including low-income adults in wellness programs, low-income adults with mental health issues, seniors in fall prevention programs, minorities, and veterans.

Working with these organizations, Gualtieri will distribute the devices, monitor their effect on health, and, she hopes, learn more about how they support behavior change. For now, she knows she will soon be helping people for whom a Fitbit or a Jawbone seems too expensive. She’s eager to move ahead, confident that the technology could prove to be a critical aid to wellness. 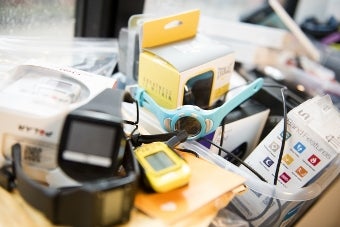 “Success would be more people knowing about us so we get more donations, and more organizations partnering with us in research studies,” says Lisa Gualtieri. Photo: Alonso Nichols

Gualtieri comes to the medicine by way of computer science. After earning a Ph.D. in the field from Harvard, she went into research and consulting, and, she says, “I found I was happiest when the work was health related.”

About a year ago she was reading reports on the use of activity trackers. One survey stood out: it noted that one-third of all people stopped using such devices within six months. Nationwide, according to analysts at the market research company NPD Group, about 3.3 million fitness bands and activity trackers were sold between April 2013 and March 2014. That meant possibly a million-plus unused trackers were classified as clutter.

Gualtieri was also intrigued by the demographics of activity tracker users. According to Nielsen, nearly half of wearable owners are between 18 and 34 years old, and the consumer group as a whole has a good deal of disposable income, with 29 percent making over $100,000.

Enter the proverbial light bulb. What about the people left out of the digital revolution?

“I thought, the people who are least likely to purchase activity trackers—people who are older, and lower-income—may be the ones who can benefit from them the most,” says Gualtieri. “They could support critical lifestyle changes that would address serious health concerns.”

Her initial challenge was figuring out how to collect unused trackers. Gualtieri’s first impulse was to get manufacturers heavily involved. Then came a conversation with Boston-based Fitbit executives that proved eye-opening, if disappointing. “They were very helpful,” she says, “but their interest is in growing their market.”

So she resolved to appeal to consumers directly. She started with the basics: she made a logo, started a Facebook page and got a postage-paid mailing label to make it as easy as possible for someone to mail her a tracker. She also worked with Tufts legal counsel so RecycleHealth met all the requirements of a 501(c)(3) charity.

RecycleHealth has since gained momentum from a Tisch College Faculty Fellowship, awarded to Tufts faculty who integrate active citizenship into their research. Other supporters help with the program's day-to-day operations, such as research assistant Sandra Rosenbluth, N15, who developed RecycleHealth’s website and attends conferences with Gualtieri.

At one of these conferences, Gualtieri met Jeffrey Phillips, a member of the clinical faculty at the Tufts School of Medicine, who provided RecycleHealth’s trackers to members of a wellness program he runs at his private practice, Family Doctors, in Swampscott, Massachusetts. At the conclusion of the 12-week program, Gualtieri and Rosenbluth will interview participants about their experiences with the trackers.

Marketing for RecycleHealth got an unexpected boost from an applicant to the digital health communication certificate program, who volunteered her design skills and did a photo shoot of donated devices for promotional use. Through Twitter, a senior executive at Macy’s in New York got involved as well; now the company’s Herald Square store provides the RecycleHealth mailing labels at its Fitbit counter. (You can also print it off RecycleHealth’s website.)

With positive projections for fitness tracker sales—the industry, valued at $2 billion in 2014, should be worth $5.4 billion by 2019, according to Parks Associates, a market research firm that focuses on consumer technology—RecycleHealth has tremendous potential.

Gualtieri says she’s ready. “Success would be more people knowing about us so we get more donations, and more organizations partnering with us in research studies. We have many unanswered questions about who these devices could help.”