Tufts Student Wins One of Two NCAA Scholarships in the Country

For track star Mitchell Black, E16, the sky is the limit as he next pursues a Ph.D. in aerospace engineering, hoping to be an astronaut 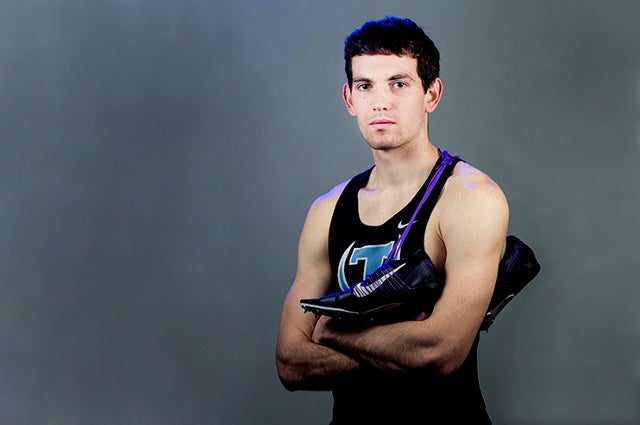 Tufts University senior Mitchell Black, E16, a three-time national champion in the 800 meters who wants to be an astronaut, is one of two student-athletes in the country to be awarded the NCAA’s 2016 Walter Byers Postgraduate Scholarship. He is the first recipient ever selected from the New England Small College Athletic Conference (NESCAC).

Established in 1988 to honor the former NCAA executive director, the program awards a $24,000 scholarship each year to one male and one female scholar-athlete selected from a pool of applicants from NCAA Division I, II and III schools. The grant, which can be renewed for a second year, recognizes outstanding academic achievement and the potential for success in postgraduate study. The University of Tulsa’s Katherine Riojas, a soccer player, is this year’s other recipient.

Black, an Academic All-American in 2015, is pursuing a double major in mechanical engineering and astrophysics at Tufts and plans to earn a doctorate in aerospace engineering at Georgia Tech or the University of Michigan. He has a 3.72 grade point average and received Tufts’ C.P. Ciaffone and L.W. Pote Scholarship for excellence in engineering. In addition to his work in the classroom and on the track, Black volunteers with Tufts’ Engineering Mentors program, helping with other undergrads, and was elected to Tau Beta Pi, the engineering honor society.

“Mitchell’s quiet confidence and sense of direction really stood out,” said Andrew Alia, chair of the NCAA Walter Byers Scholarship Committee, which chose the scholarship recipients. “Mitchell’s accomplishments in the classroom, on the track and in the community have set him up to reach for the stars as he pursues his goal of becoming an astronaut.”

Black is a nine-time All-American for the Jumbos who won the NCAA indoor 800 meters championship in 2015 and 2016, as well as the NCAA outdoor 800 title in 2015. He has been a key member of three straight NESCAC championship teams at Tufts, and will join his teammates in the pursuit of a fourth conference title on April 30.

His path to success started with a roadblock. Black had hoped to play soccer for the Jumbos, but was cut from the team before the season started. At the time, his father said something he took to heart: “When God closes a door, He always opens a window.”

“The opening of that window liberated me from the track I felt I had to follow, and gave me the freedom to form my own,” he wrote in his scholarship application essay.

Black traveled to NCAA headquarters in Indianapolis on April 11 for an interview with the scholarship selection committee. He got the good news two days later.

“I had class all morning on Wednesday, and had told that to the woman who would be delivering the news, so I knew that I would not be called until at least noon,” he said. “I basically sat staring at my phone for an hour before I got the call a few minutes after 1 o’clock. A wave of relief and excitement washed over me.”

He wrote about his dreams in the scholarship application: “Exhilarating, beautiful and scientifically profound, I can imagine no career more fun and fulfilling.”