James Stavridis joins the prestigious honor society based in Cambridge

Fletcher School Dean James Stavridis, F83, F84, has been elected to the American Academy of Arts and Sciences, along with 212 leaders from academia, business, public affairs, the humanities and the arts.

“I am humbled by this honor,” says Stavridis, who has led the Fletcher School since 2013. “The American Academy of Arts and Sciences is one of the premier organizations in the world, and I am proud to have been chosen alongside many accomplished and talented individuals.” 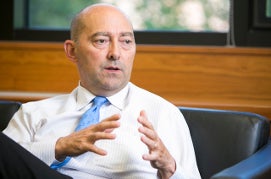 James Stavridis. Photo: Kelvin Ma
Members of the honorary society, which is among the nation’s most prestigious, contribute to academy publications, as well as to studies of science and technology policy, energy and global security, social policy and American institutions, the humanities and culture, and education.

The 2016 class includes winners of the Pulitzer Prize and the Wolf Prize, MacArthur and Guggenheim fellowships, the Fields Medal, and the Grammy and National Book awards.

Stavridis, a retired Navy admiral, was NATO’s top military commander overseeing all American forces under the U.S. European Command. He has defined the 21st-century U.S. military as not built solely on might, but also on what is known as “smart power,” the creation of durable partnerships with friends and allies to achieve mutual goals of security, prosperity and peace.

He has published six books and more than 150 articles and is a frequent commentator in national and international media on global affairs.

“It is an honor to welcome this new class of exceptional women and men as part of our distinguished membership,” said Don Randel, chair of the academy’s board of directors. “Their election affords us an invaluable opportunity to bring their expertise and knowledge to bear on some of the most significant challenges of our day.”

The new class will be inducted at a ceremony in October in Cambridge, Massachusetts.