The Promise of Growing New Teeth 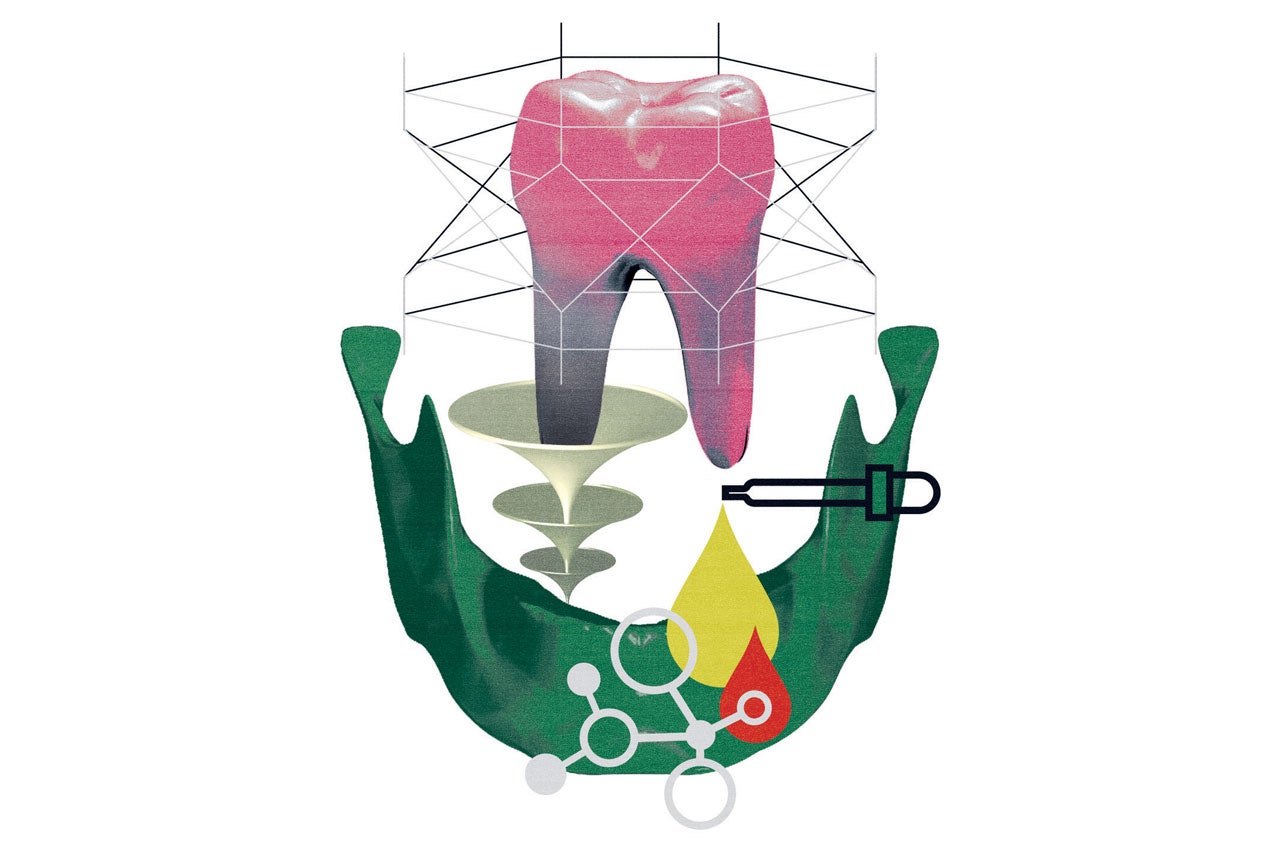 Losing teeth is part of childhood. For adults, however, missing molars or broken incisors require a manmade solution in the form of dentures or implants. Using dental stem cells to grow new teeth and jawbone would have advantages over existing tooth-replacement techniques, and could even be used to reconstruct a patient’s jaw after a severe injury or disease, according to a researcher at the Tufts School of Dental Medicine who is trying to do just that.

Pam Yelick, G89, a professor of orthodontics and director of the division of craniofacial and molecular genetics, and her colleagues are developing ways to grow healthy new teeth and bone from dental stem cells—a type of “universal cell” that can morph into many different types of oral tissue. After harvesting the stem cells from healthy adult tooth pulp, Yelick’s team isolates them in the lab and gradually coaxes them into forming new tooth buds, the tiny clusters of soft tissue that eventually grow into a mature tooth.

It’s a revolutionary new way of treating damaged or missing teeth. Tooth buds, she says, are incredibly complex—they form only in conditions that mimic an embryonic jaw, in which bone, tooth, soft palate and gums are beginning to take shape.

Because an implant can’t move, the repeated impact of chewing is transferred directly to the jawbone and surrounding teeth, causing gradual bone loss. “If you could instead implant living, vascularized tooth in the jaw, that could be a much better option,” says Yelick, who also holds faculty appointments at the Sackler School of Graduate Biomedical Sciences, the School of Medicine and the School of Engineering at Tufts.

Just as in a developing human embryo, dental stem cells must receive the right mixture of nutrients and growth hormones at precisely the right times. It’s nearly impossible to do that in petri dish, however. Instead, for the cells to grow into tooth bud tissue, they’re placed on a “scaffold,” a biological environment that mimics the three-dimensional structure of tooth buds as they form in an embryo.

Getting that structure just right is a big part of Yelick’s challenge. For the cells to grow effectively, the scaffold needs to have the exact shape and elasticity of real embryonic tissue.

Her team is still experimenting with designing the right scaffold, testing materials ranging from polyester to silk—which can be formed into complex structures, yet degrades easily in the body—to find the best configuration.

Their work looks promising. Over the past several years, Yelick and her research team have used these scaffolds to develop tooth buds, implanted them in pig jaws and watched them develop into early-stage adult teeth over the course of five months. It’s an encouraging sign, but she quickly notes that it will be years before we will be able to grow our own replacement teeth.

This article first appeared in the Winter 2016 issue of Tufts Dental Medicine magazine.