Journalism for a Digital World 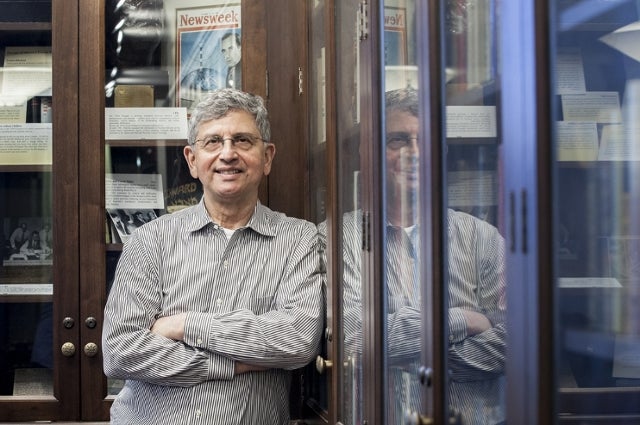 Edward Schumacher-Matos, F73, learned about newspapering from the best and the brightest: while at Fletcher, he took a course with the Pulitzer Prize-winning journalist David Halberstam. It was one of those chance encounters that launched a career.

Halberstam introduced him to the legendary editor of the Boston Globe, Tom Winship, who in turn suggested he get started reporting for a local paper. So, while still at Fletcher, Schumacher-Matos landed a gig as a part-time reporter for the Quincy Patriot Ledger, a regional paper of Boston’s South Shore. He covered the routine business of small-town life—school board and planning board meetings and those annual town meetings where the simple act of raising a hand approves multimillion-dollar budgets. “I really loved it,” he says.

So began what turned out to be a lifelong international career in journalism. Schumacher-Matos shared a 1980 Pulitzer Prize as part of the Philadelphia Inquirer team that covered the Three Mile Island nuclear power plant accident and was bureau chief for the New York Times in Madrid and Buenos Aires, associate publisher of the Wall Street Journal’s Americas editions in Spanish and Portuguese, and ombudsman for the Miami Herald and, until last year, for National Public Radio.

He’s come full circle now, returning to the Fletcher School as director of the newly renamed Edward R. Murrow Center for a Digital World. His latest assignment is an ambitious one: transform the center into a global player in shaping how the rapid creation and transmission of information will alter international relations.

Aided by a generous gift, Schumacher-Matos wants the center—inaugurated 50 years ago by Vice President Hubert H. Humphrey to honor its namesake’s distinguished career in journalism and leadership of the U.S. Information Agency—to be the leading voice in analyzing how the digital age can give rise to democracies or plunge the world into chaos.

“Just as Murrow himself was very much a leader, first in the possibilities of radio journalism and then in television, we think the center should become a leader in the digital era,” he says.

“We have no idea of the full cultural, social and political impact of the digital age,” says Schumacher-Matos. “It could be a force for democracy, with societies and nations moving toward a single, more harmonious world. Or it could be a force for chaos, moving us toward anarchy. The Murrow Center can provide a framework for us to examine these questions with a wide lens, so we can guide positive outcomes.”

The center has all the buzz of a startup with big ambitions. New ventures include the Fletcher Ideas Exchange, a TEDx-styled event that helps students hone skills critical to public diplomacy, and new international collaborations pushing into uncharted issues, such as an examination of digital rights as human rights.

This summer, the center and the Woodrow Wilson International Center for Scholars are hosting a roundtable discussion in Bogotá, Colombia, that will bring together digital rights experts to design model Internet laws in Latin America. “Digital rights are starting to become seen as a human rights issue,” says Schumacher-Matos. It’s a highly relevant conversation for Latin America, says Schumacher-Matos, as “laws that give people the right to Internet access are viewed by many as essential to economic development.”

While the initial vision behind the Murrow Center was examining media, its area of inquiry is a mushrooming, moving target. There are now more than 7 billion mobile device subscriptions worldwide, up from 738 million in 2000, according to the U.N. International Telecommunication Union. Internet use has increased sevenfold since 2000, to more than 3.2 billion people, 2 billion of whom live in developing countries.

Schumacher-Matos wants to put the Murrow Center smack in the thick of this digital revolution. Working with media outlet partners in India and China, the center is developing an online interactive news platform that will “bring together different points of view from different parts of the world in a way that is compelling.”

While publications like the New York Times, the Economist, the Wall Street Journal and Foreign Affairs frame stories from a national point of view, the new platform will focus on comparative perspectives, says Schumacher-Matos. “I see it as a global understanding project. The whole idea is that by opening up each other’s markets to each other’s voices, we will contribute to understanding, and, over time, we hope good things will come from it.”

Other good things in the works are a school-wide research initiative called Cyberspace and World Order. The consequences of an interconnected world on world stability remain unclear, as they disrupt historic relationships between states and citizens. The Murrow-led initiative—involving a faculty committee, student groups, and outside alumni and thinkers—will identify how Fletcher could best contribute to a new digital and unified cyber strategy, and support faculty and student research in this emerging field.

The Murrow Center is taking a comprehensive approach to meeting “extremely high student demand” for communication skills, too. Schumacher-Matos also teaches editing and op-ed writing for Ph.D. students and editors of student journals. When asked about the future of the Murrow Center, Schumacher-Matos is characteristically upbeat. “We’ll keep building it, and hopefully continue to get more financing to support it,” he says.

The Film and TV Forecast